From the General Audience on St. John of Avila

Thanks to his insight into the times and his excellent academic training, John of Avila was an outstanding theologian and a true humanist. He proposed the establishment of an international court of arbitration to avoid wars and he invented and patented a number of engineering devices. Leading a life of great poverty, he devoted himself above all to encouraging the Christian life of those who readily listened to his preaching and followed him everywhere. He was especially concerned for the education and instruction of boys and young men, especially those studying for the priesthood. He founded several minor and major colleges, which after the Council of Trent would become seminaries along the lines laid down by that Council. He also founded the University of Baeza, which was known for centuries for its work of training clerics and laity. 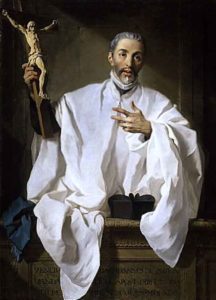 3. John of Avila was a contemporary, friend and counsellor of great saints, and one of the most celebrated and widely esteemed spiritual masters of his time.

Saint Ignatius Loyola, who held him in high regard, was eager for him to enter the nascent “Company” which was to become the Society of Jesus. Although he himself did not enter, the Master directed some thirty of his best students to the Society. Juan Ciudad, later Saint John of God, the founder of the Order of Hospitallers, was converted by listening to the saintly Master and thereafter relied on him as his spiritual director. The grandee Saint Francis Borgia, later the General of the Society of Jesus, was another important convert thanks to the help of Father Avila. Saint Thomas of Villanova, Archbishop of Valencia, disseminated Father Avila’s catechetical method in his diocese and throughout the south of Spain. Among Father Avila’s friends were Saint Peter of Alcántara, Provincial of the Franciscans and reformer of the Order, and Saint John de Ribera, Bishop of Badajoz, who asked him to provide preachers to renew his diocese and later, as Archbishop of Valencia, kept a manuscript in his library containing 82 of John’s sermons. Teresa of Jesus, now a Doctor of the Church, underwent great trials before she was able to send him the manuscript of her Autobiography. Saint John of the Cross, also a Doctor of the Church, was in touch with his disciples in Baeza who assisted in the Carmelite reform. Blessed Bartholomew of the Martyrs was acquainted with his life and holiness through common friends, and many others acknowledged the moral and spiritual authority of the Master.
For more visit Vatican.va