Augustine of Hippo
– Confessions
– Letters
– City of God
– Christian Doctrine
– On the Holy Trinity
– The Enchiridion
– On the Catechising of the Uninstructed
– On Faith and the Creed
– Concerning Faith of Things Not Seen
– On the Profit of Believing
– On the Creed: A Sermon to Catechumens
– On Continence
– On the Good of Marriage
– On Holy Virginity
– On the Good of Widowhood
– On Lying
– To Consentius: Against Lying
– On the Work of Monks
– On Patience
– On Care to be Had For the Dead
– On the Morals of the Catholic Church
– On the Morals of the Manichaeans
– On Two Souls, Against the Manichaeans
– Acts or Disputation Against Fortunatus the Manichaean
– Against the Epistle of Manichaeus Called Fundamental
– Reply to Faustus the Manichaean
– Concerning the Nature of Good, Against the Manichaeans
– On Baptism, Against the Donatists
– Answer to Letters of Petilian, Bishop of Cirta
– Merits and Remission of Sin, and Infant Baptism
– On the Spirit and the Letter
– On Nature and Grace
– On Man’s Perfection in Righteousness
– On the Proceedings of Pelagius
– On the Grace of Christ, and on Original Sin
– On Marriage and Concupiscence
– On the Soul and its Origin
– Against Two Letters of the Pelagians
– On Grace and Free Will
– On Rebuke and Grace
– The Predestination of the Saints/Gift of Perseverance
– Our Lord’s Sermon on the Mount
– The Harmony of the Gospels
– Sermons on Selected Lessons of the New Testament
– Tractates on the Gospel of John
– Homilies on the First Epistle of John
– Soliloquies
– The Enarrations, or Expositions, on the Psalms

After his Baptism, Augustine decided to return to Africa with his friends, with the idea of living a community life of the monastic kind at the service of God. However, while awaiting their departure in Ostia, his mother fell ill unexpectedly and died shortly afterwards, breaking her son’s heart. Having returned to his homeland at last, the convert settled in Hippo for the very purpose of founding a monastery. In this city on the African coast he was ordained a priest in 391, despite his reticence, and with a few companions began the monastic life which had long been in his mind, dividing his time between prayer, study and preaching. All he wanted was to be at the service of the truth. He did not feel he had a vocation to pastoral life but realized later that God was calling him to be a pastor among others and thus to offer people the gift of the truth. He was ordained a Bishop in Hippo four years later, in 395. Augustine continued to deepen his study of Scripture and of the texts of the Christian tradition and was an exemplary Bishop in his tireless pastoral commitment: he preached several times a week to his faithful, supported the poor and orphans, supervised the formation of the clergy and the organization of mens’ and womens’ monasteries. In short, the former rhetorician asserted himself as one of the most important exponents of Christianity of that time. He was very active in the government of his Diocese – with remarkable, even civil, implications – in the more than 35 years of his Episcopate, and the Bishop of Hippo actually exercised a vast influence in his guidance of the Catholic Church in Roman Africa and, more generally, in the Christianity of his time, coping with religious tendencies and tenacious, disruptive heresies such as Manichaeism, Donatism and Pelagianism, which endangered the Christian faith in the one God, rich in mercy. 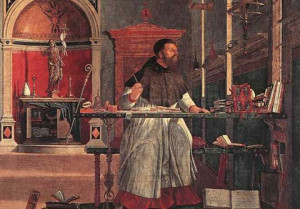 And Augustine entrusted himself to God every day until the very end of his life:  smitten by fever, while for almost three months his Hippo was being besieged by vandal invaders, the Bishop – his friend Possidius recounts in his Vita Augustini – asked that the penitential psalms be transcribed in large characters, “and that the sheets be attached to the wall, so that while he was bedridden during his illness he could see and read them and he shed constant hot tears” (31, 2). This is how Augustine spent the last days of his life. He died on 28 August 430, when he was not yet 76. We will devote our next encounters to his work, his message and his inner experience.