For more on St. Athanasius of Alexandria and his teachings

Athanasius was undoubtedly one of the most important and revered early Church Fathers. But this great Saint was above all the impassioned theologian of the Incarnation of the Logos, the Word of God who – as the Prologue of the fourth Gospel says – “became flesh and dwelt among us” (Jn 1: 14).

For this very reason Athanasius was also the most important and tenacious adversary of the Arian heresy, which at that time threatened faith in Christ, reduced to a creature “halfway” between God and man, according to a recurring tendency in history which we also see manifested today in various forms. 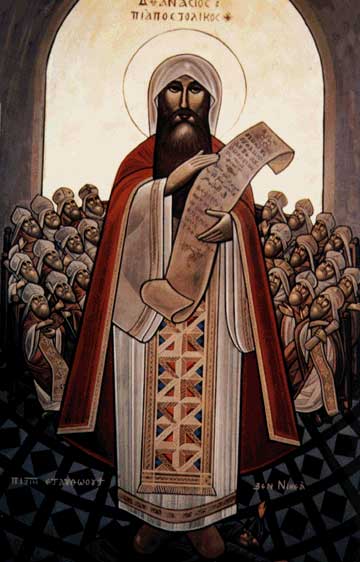 In all likelihood Athanasius was born in Alexandria, Egypt, in about the year 300 A.D. He received a good education before becoming a deacon and secretary to the Bishop of Alexandria, the great Egyptian metropolis. As a close collaborator of his Bishop, the young cleric took part with him in the Council of Nicaea, the first Ecumenical Council, convoked by the Emperor Constantine in May 325 A.D. to ensure Church unity. The Nicene Fathers were thus able to address various issues and primarily the serious problem that had arisen a few years earlier from the preaching of the Alexandrian priest, Arius.

With his theory, Arius threatened authentic faith in Christ, declaring that the Logos was not a true God but a created God, a creature “halfway” between God and man who hence remained for ever inaccessible to us. The Bishops gathered in Nicaea responded by developing and establishing the “Symbol of faith” [“Creed”] which, completed later at the First Council of Constantinople, has endured in the traditions of various Christian denominations and in the liturgy as the Niceno-Constantinopolitan Creed.

In this fundamental text – which expresses the faith of the undivided Church and which we also recite today, every Sunday, in the Eucharistic celebration – the Greek term homooúsiosis featured, in Latin consubstantialis: it means that the Son, the Logos, is “of the same substance” as the Father, he is God of God, he is his substance. Thus, the full divinity of the Son, which was denied by the Arians, was brought into the limelight.

Dr. Matthew E. Bunson is a Register senior editor and senior contributor to EWTN News. For the past 20 years, he has been active in the area of Catholic social communications and education, including writing, editing, and teaching on a variety of topics related to Church history, the papacy, the saints and Catholic culture. He is faculty chair at Catholic Distance University, a senior fellow of the St. Paul Center for Biblical Theology, and the author or co-author of over 50 books including The Encyclopedia of Catholic History, The Pope Encyclopedia, We Have a Pope! Benedict XVI, The Saints Encyclopedia and best-selling biographies of St. Damien of Molokai and St. Kateri Tekakwitha.