Msgr. Esseff reflects on the readings given by the Church at this time of the year which brings us the teachings on the end 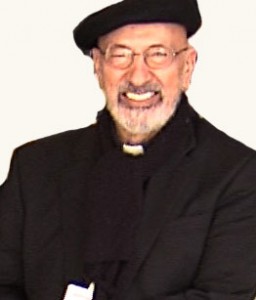 times.   How are we to understand these readings?  What did it mean to the people of the Church 2000 years ago?  What does it mean for us today?  The Gospel and the words of the Jesus having meaning for the entire world today.  For those persecuted today, this message is for you!

After this I heard what sounded like
the loud voice of a great multitude in heaven, saying:

“Alleluia!
Salvation, glory, and might belong to our God,
for true and just are his judgments.
He has condemned the great harlot
who corrupted the earth with her harlotry.
He has avenged on her the blood of his servants.”

They said a second time:

“Alleluia! Smoke will rise from her forever and ever.”

Then the angel said to me, “Write this:
Blessed are those who have been called
to the wedding feast of the Lamb.”

Jesus said to his disciples:
“When you see Jerusalem surrounded by armies,
know that its desolation is at hand.
Then those in Judea must flee to the mountains.
Let those within the city escape from it,
and let those in the countryside not enter the city,
for these days are the time of punishment
when all the Scriptures are fulfilled.
Woe to pregnant women and nursing mothers in those days,
for a terrible calamity will come upon the earth
and a wrathful judgment upon this people.
They will fall by the edge of the sword
and be taken as captives to all the Gentiles;
and Jerusalem will be trampled underfoot by the Gentiles
until the times of the Gentiles are fulfilled.”There will be signs in the sun, the moon, and the stars,
and on earth nations will be in dismay,
perplexed by the roaring of the sea and the waves.
People will die of fright
in anticipation of what is coming upon the world,
for the powers of the heavens will be shaken.
And then they will see the Son of Man
coming in a cloud with power and great glory.
But when these signs begin to happen,
stand erect and raise your heads
because your redemption is at hand.”

Can you please help us meet our funding needs this Lent?