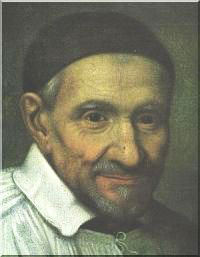 Vincent de Paul was born into a peasant family on April 24, 1581, in the village of Pouy in southwestern France.  He became a priest at the age of 19, and would go on to found hospitals, charitable organizations and many other ministries and works that would serve the needs of the poor.  With Louise de Marillac, a talented and sensitive friend, he started the first religious group of women dedicated entirely to works of charity outside the cloister, a group called the Daughters of Charity.

Vincent was a man of action rather than of theory. The religious spirit he communicated was simple, practical and straightforward. He looked to Christ as his leader and tried to translate the Gospel message into concrete results. He died on Sept. 27, 1660, and was canonized a saint in the Roman Catholic Church in 1737.

“No matter what others say or do, even if the wicked succeed, do not be troubled: commit everything to God and put your trust in him.”

“The most powerful weapon to conquer the devil is humility. For, as he does not know at all how to employ it, neither does he know how to defend himself from it.”

A “Great Hero of Charity”

As reported by Zenit, the Holy Father spoke of St. Vincent de Paul:
The Pope reflected on the Gospel reading from today’s Mass, which recounts the story of the rich man suffering torment, and the poor man Lazarus in the bosom of Abraham.

The message of the parable, the Holy Father said, “points out that while we are in this world we must listen to the Lord who speaks to us through the Scriptures and live according to his will, because, after death, it will be too late to make amends.”

“So,” he explained, “this parable tells us two things: The first is that [God] loves the poor and lifts them up from their humiliation; the second is that our eternal destiny is 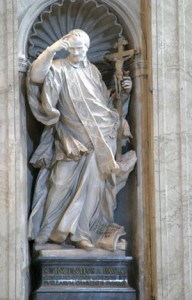 conditioned by our attitude; it is up to us to follow the road to life that God has shown us, and this is the road of love, not understood as sentiment but as service to others in the charity of Christ.”

The Bishop of Rome called it a “happy coincidence” that Monday marks the feast of one of the Church’s great heroes of charity, St. Vincent de Paul, patron of Catholic charitable organizations.

“In the France of the 1600s, he touched with his own hand the great contrast between the richest and the poorest,” the Pope said. “[…] Driven by the love of Christ, Vincent de Paul knew how to organize stable forms of service to marginalized persons.”

In fact, the saint founded the first women’s congregation to live their consecration “‘in the world,’ in the midst of the people, with the sick and the needy,” he noted.

The Pontiff added, “Dear friends, only Love with a capital ‘L’ makes for true happiness!” – Zenit