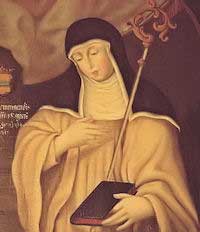 stressed the importance of liturgy in building a close relationship with God.

Today I want to talk to you about St Matilda of Hackeborn, one of the great figures of the convent of Helfta, who lived in the 13th century. Her sister, St Gertrude the Great, tells of the special graces that God granted to St Matilda in the sixth book of Liber Specialis Gratiae (Book of Special Grace), which states : “What we have written is very little in comparison with what we have omitted. We are publishing these things solely for the glory of God and the usefulness of our neighbour, for it would seem wrong to us to keep quiet about the many graces that Matilda received from God, not so much for herself, in our opinion, but for us and for those who will come after us” (Mechthild von Hackeborn, Liber specialis gratiae, vi, 1).

This work was written by St Gertrude and by another sister of Helfta and has a unique story. At the age of 50, Matilda went through a grave spiritual crisis, as well as physical suffering. In this condition she confided to two of her sisters who were friends the special graces with which God had guided her since childhood. However, she did not know that they were writing it all down. When she found out she was deeply upset and distressed. However, the Lord reassured her, making her realize that all that had been written was for the glory of God and for the benefit of her neighbour (cf. ibid., II, 25; V, 20). This work, therefore, is the principal source to refer to for information on the life and spirituality of our Saint.

With her we are introduced into the family of Baron von Hackeborn, one of the noblest, richest and most powerful barons of Thuringia, related to the Emperor Frederick ii, and we enter the convent of Helfta in the most glorious period of its history. The Baron had already given one daughter to the convent, Gertrude of Hackeborn (1231/1232 – 1291/1292). She was gifted with an outstanding personality. She was Abbess for 40 years, capable of giving the spirituality of the convent a particular hallmark and of bringing it to an extraordinary flourishing as the centre of mysticism and culture, a school for scientific and theological training. Gertrude offered the nuns an intellectual training of a high standard that enabled them to cultivate a spirituality founded on Sacred Scripture, on the Liturgy, on the Patristic tradition, on the Cistercian Rule and spirituality, with a particular love for St Bernard of Clairvaux and William of Saint-Thierry. She was a real teacher, exemplary in all things, in evangelical radicalism and in apostolic zeal. Matilda, from childhood, accepted and enjoyed the spiritual and cultural atmosphere created by her sister, later giving it her own personal hallmark.

Matilda was born in 1241 or 1242 in the Castle of Helfta. She was the Baron’s third daughter. When she was seven she went with her mother to visit her sister Gertrude in the convent of Rodersdorf. She was so enchanted by this environment that she ardently desired to belong to it. She entered as a schoolgirl and in 1258 became a nun at the convent, which in the meantime had moved to Helfta, to the property of the Hackeborns. She was distinguished by her humility, her fervour, her friendliness, the clarity and the innocence of her life and by the familiarity and intensity with which she lived her relationship with God, the Virgin and the Saints. She was endowed with lofty natural and spiritual qualities such as knowledge, intelligence, familiarity with the humanities and a marvellously sweet voice: everything suited her to being a true treasure for the convent from every point of view (ibid, Proem.). Thus when “God’s nightingale”, as she was called, was still very young she became the principal of the convent’s school, choir mistress and novice mistress, offices that she fulfilled with talent and unflagging zeal, not only for the benefit of the nuns but for anyone who wanted to draw on her wisdom and goodness.

Illumined by the divine gift of mystic contemplation, Matilda wrote many prayers. She was a teacher of faithful doctrine and deep humility, a counsellor, comforter and guide in discernment. We read: “she distributed doctrine in an abundance never previously seen at the convent, and alas, we are rather afraid that nothing like it will ever be seen again. The sisters would cluster round her to hear the word of God, as if she were a preacher. “She was the refuge and consoler of all and, by a unique gift of God, was endowed with the grace of being able to reveal freely the secrets of the heart of each one. Many people, not only in the convent but also outsiders, religious and lay people, who came from afar, testified that this holy virgin had freed them from their afflictions and that they had never known such comfort as they found near her. “Furthermore, she composed and taught so many prayers that if they were gathered together they would make a book larger than a Psalter” (ibid., VI, 1).

In 1261 a five year old girl came to the convent. Her name was Gertrude: She was entrusted to the care of Matilda, just 20 years of age, who taught her and guided her in the spiritual life until she not only made her into an excellent disciple but also her confidant. In 1271 or 1272, Matilda of Magdeburg also entered the convent. So it was that this place took in four great women two Gertrudes and two Matildas the glory of German monasticism. During her long life which she spent in the convent, Matilda was afflicted with continuous and intense bouts of suffering, to which she added the very harsh penances chosen for the conversion of sinners. In this manner she participated in the Lord’s Passion until the end of her life (cf. ibid., VI, 2).

Prayer and contemplation were the life-giving humus of her existence: her revelations, her teachings, her service to her neighbour, her journey in faith and in love have their root and their context here.

In the first book of the work,Liber Specialis Gratiae, the nuns wrote down Matilda’s confidences pronounced on the Feasts of the Lord, the Saints and, especially, of the Blessed Virgin. This Saint had a striking capacity for living the various elements of the Liturgy, even the simplest, and bringing it into the daily life of the convent. Some of her images, expressions and applications are at times distant from our sensibility today, but, if we were to consider monastic life and her task as mistress and choir mistress, we should grasp her rare ability as a teacher and educator who, starting from the Liturgy, helped her sisters to live intensely every moment of monastic life.

Matilda gave an emphasis in liturgical prayer to the canonical hours, to the celebrations of Holy Mass and, especially, to Holy Communion. Here she was often rapt in ecstasy in profound intimacy with the Lord in his most ardent and sweetest Heart, carrying on a marvellous conversation in which she asked for inner illumination, while interceding in a special way for her community and her sisters. At the centre are the mysteries of Christ which the Virgin Mary constantly recommends to people so that they may walk on the path of holiness: “If you want true holiness, be close to my Son; he is holiness itself that sanctifies all things” (ibid., I, 40). The whole world, the Church, benefactors and sinners were present in her intimacy with God. For her, Heaven and earth were united.

Her visions, her teachings, the events of her life are described in words reminiscent of liturgical and biblical language. In this way it is possible to comprehend her deep knowledge of Sacred Scripture, which was her daily bread. She had constant recourse to the Scriptures, making the most of the biblical texts read in the Liturgy, and drawing from them symbols, terms, countryside, images and famous figures. She had a special love for the Gospel: “The words of the Gospel were a marvellous nourishment for her and in her heart stirred feelings of such sweetness that, because of her enthusiasm, she was often unable to finish reading it…. The way in which she read those words was so fervent that it inspired devotion in everyone. “Thus when she was singing in the choir, she was completely absorbed in God, uplifted by such ardour that she sometimes expressed her feelings in gestures…. “On other occasions, since she was rapt in ecstasy, she did not hear those who were calling or touching her and came back with difficulty to the reality of the things around her” (ibid., VI, 1). In one of her visions, Jesus himself recommended the Gospel to her; opening the wound in his most gentle Heart, he said to her: “consider the immensity of my love: if you want to know it well, nowhere will you find it more clearly expressed than in the Gospel. No one has ever heard expressed stronger or more tender sentiments than these: “As my father has loved me, so I have loved you (Jn 15: 9)'” (ibid., I, 22).

Dear friends, personal and liturgical prayer, especially the Liturgy of the Hours and Holy Mass are at the root of St Matilda of Hackeborn’s spiritual experience. In letting herself be guided by Sacred Scripture and nourished by the Bread of the Eucharist, she followed a path of close union with the Lord, ever in full fidelity to the Church. This is also a strong invitation to us to intensify our friendship with the Lord, especially through daily prayer and attentive, faithful and active participation in Holy Mass. The Liturgy is a great school of spirituality.

Her disciple Gertrude gives a vivid pictures of St Matilda of Hackeborn’s last moments. They were very difficult but illumined by the presence of the Blessed Trinity, of the Lord, of the Virgin Mary and of all the Saints, even Gertrude’s sister by blood. When the time came in which the Lord chose to gather her to him, she asked him let her live longer in suffering for the salvation of souls, and Jesus was pleased with this further sign of her love.

Matilda was 58 years old. The last leg of her journey was marked by eight years of serious illness. Her work and the fame of her holiness spread far and wide. When her time came, “the God of majesty… the one delight of the soul that loves him… sang to her: Venite vos, benedicti Patris mei…. Venite, o voi che siete i benedetti dal Padre mio, venite a ricevere il regno… and he united her with his glory” (ibid., VI, 8).

May St Matilda of Hackeborn commend us to the Sacred Heart of Jesus and to the Virgin Mary. She invites us to praise the Son with the Heart of the Mother, and to praise Mary with the Heart of the Son: “I greet you, O most deeply venerated Virgin, in that sweetest of dews which from the Heart of the Blessed Trinity spread within you; I greet you in the glory and joy in which you now rejoice for ever, you who were chosen in preference to all the creatures of the earth and of Heaven even before the world’s creation! Amen” (ibid., I, 45).