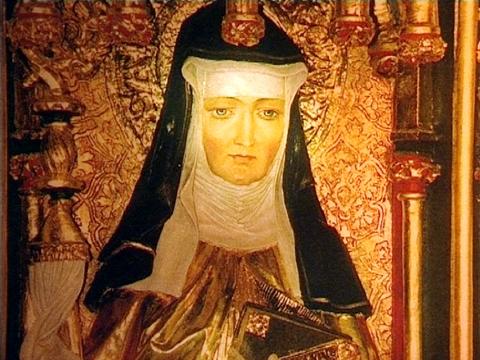 There has been a strange dismissal of St. Hildegard over the years, and I am not sure why. This was a woman who was a great mystic, writer, poet, musician, artist…oh you name it AND a Benedictine nun!  St. Hildegard valued the hierachy and authority of the Church, and even sought counsel and received validation from the great mystical doctor of the Church, St. Bernard of Clairvaux.  It’s time we reclaim St. Hildegard and hold her up high as a saint and model to learn and grow with!

” While still superior of the convent of St. Disibod the saint began to dictate her mystical visions to her spiritual advisor, the monk Volmar, and to her own secretary, Richardis of Strade. “As is always the case in the lives of true mystics, Hildegard wished to place herself under the authority of the wise, in order to discern the origin of her visions, which she was afraid could be the fruit of illusions and not from God”.

To this end she spoke with St. Bernard of Clairvaux who calmed her fears and encouraged her. In 1147, moreover, she received the crucial approbation of Pope Eugene III who, in the Synod of Trier, read out one of the texts dictated by Hildegard which had been presented to him by Archbishop Henry of Mainz.

“The Pope authorised the mystic to write her visions and to speak in public. From that moment Hildegard’s spiritual prestige grew to the point that her contemporaries gave her the title of the ‘Teutonic prophetess’“, said Benedict XVI.” – Vatican Information Service

God is the foundation for everything
This God undertakes, God gives.
Such that nothing that is necessary for life is lacking.
Now humankind needs a body that at all times honors and praises God.
This body is supported in every way through the earth.
Thus the earth glorifies the power of God.