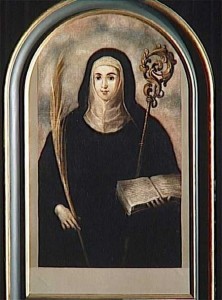 (1256-1302 A.D.) Few men have merited the title, “the Great”; fewer women. I know of only one nun so honored, St. Gertrude of Helfta, a mystic whose spiritual writings have remained influential up to the present.

Nothing is known of this German woman’s family background. When five years old, she was entrusted to the sisters of Helfta Abbey to be educated. From a very young age she gave evidence of her brilliance and quickly outstripped her companions. In her teen years she asked to join the community. Therefore, she probably spent her whole life from childhood on within the abbey walls.

Her love for secular studies made the common life wearisome, pride and vanity ate away at her soul and she soon became an unhappy young woman until Christ appeared to her. The day was branded in her memory, it was in her 26th year, when as she says “in a happy hour, at the beginning of twilight, thou O God of truth, more radiant than any light, yet deeper than any secret thing, determined to dissolve the obscurity of my darkness.” From then on her biographer tells us “she became a theologian instead of a grammarian.” She did not give up her intellectual ardor but now, all her labors were for her sisters, to cure what she termed “the wound of ignorance”. Her many gifts and mystical graces did not prevent her from giving herself wholeheartedly to the common life with its joys and sorrows. In fact many of her special graces came to her as she took part in the ordinary routine of convent life. She felt keenly for those whose burdens involved them in distracting duties, for example those responsible for meeting the debts of the monastery. 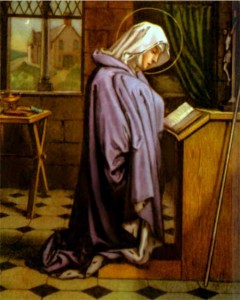 She prayed that they might have more time to pray and fewer distractions. The Lord’s answered “It does not matter to me whether you perform spiritual exercises or manual labor, provided only that your will is directed to me with a right intention. If I took pleasure only in your spiritual exercises, I should certainly have reformed human nature after Adam’s fall so that it would not need food, clothing or the other things that man must find or make with such effort.”

Many of her writings are lost, but fortunately she left to the world an abundance of spiritual joy in her book The Herald of Divine Love, in which she tells of the visions granted her by our divine Lord. She wrote this excellent, small book because she was told that nothing was given to her for her own sake only. Her Exercises is an excellent treatise on the renewal of baptismal vows, spiritual conversion, religious vows, love, praise, gratitude to God, reparation, and preparation for death.

She began to record her supernatural and mystical experiences in what eventually became her Book of Extraordinary Grace (Revelation of Saint Gertrude), together with Mechtilde’s mystical experiences Liber Specialis Gratiae, which Gertrude recorded. Most of the book was actually written by others based on Gertrude’s notes. She also wrote with or for Saint Mechtilde a series of prayers that became very popular, and through her writings helped spread devotion to the Sacred Heart (though it was not so called until revealed to St. Margaret Mary Alocoque).

Gertrude is inseparably associated with the devotion to the Sacred Heart. The pierced hear 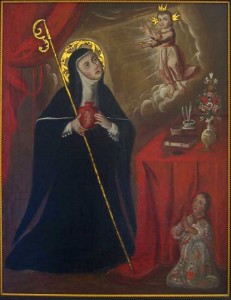 t of Jesus embodied for her the Divine Love, an inexhaustible fountain of redemptive life. Her visions and insights in connection with the Heart of Jesus are very enlightening. In one such intellectual vision, she perceived the unceasing love of Christ for us in two pulsations of his Heart – one accomplished the conversion of sinners, the other the sanctification of the just. Just as our own faithful heart keeps right on whether we advert to it or not, these pulsations will endure till the end of time despite the vicissitudes of history.

Our Lord wishes people to pray for the souls in purgatory. He once showed Gertrude a table of gold on which were many costly pearls. The pearls were prayers for the holy souls. At the same time the saint had a vision of souls freed from suffering and ascending in the form of bright sparks to heaven.

In one Vision, Our Lord tells Gertrude that he longs for someone to ask Him to release souls from purgatory, just as a king who imprisons a friend for justice’s sake hopes that someone will beg for mercy for his friend. Jesus ends with:

“I accept with highest pleasure what is offered to Me for the poor souls, for I long inexpressibly to have near Me those for whom I paid so great a price. By the prayers of thy loving soul, I am induced to free a prisoner from purgatory as often as thou dost move thy tongue to utter a word of prayer.”

In another vision she was given the Prayer which Our Lord told her would release 1000 Souls from Purgatory every time it is said with love and devotion. “Eternal Father, I offer You the Most Precious Blood of Thy Divine Son, Jesus Christ, in union with the Masses said throughout the world today, for all the Holy Souls in Purgatory, for sinners everywhere, those in the Universal Church, in my home, and in my family.” 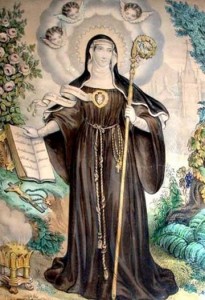 To her was granted the privilege of seeing our Lord’s Sacred Heart. The graces flowing from it appeared like a stream of purest water flowing over the whole world. In many of the visions of the Sacred Heart, we find St John the Beloved Disciple present. He who leaned back against Jesus’ chest at the Last Supper. On his own feast day, St John appeared and placed Gertrude near the wounded side of the Savior, where she could hear the pulsations of the Sacred Heart. “Why is it, O beloved of God”, she asked him, “that you who rested on His bosom at the Last Supper have said nothing of what you experienced then? St John told her “It was my task to present to the first age of the Church the doctrine of the Word made flesh which no human intellect can ever fully comprehend. The eloquence of that sweet beating of His Heart is reserved for the last age in order that the world grown cold and torpid may be set on fire with the love of God.”

These visions continued until the end of her life. Jesus said to her at the last: “Come, my chosen one, and I will place in you My throne.”

Saint Gertrude was “the Great” because of her single-hearted love for the Sacred Heart of Jesus and the souls in purgatory. Though she was never formally canonized, Pope Clement XII in 1677 directed that her feast be observed throughout the Church. It is interesting to note that Saint Teresa of Avila had a great devotion to Gertrude.  – http://www.mtep.com/stgertrude.htm