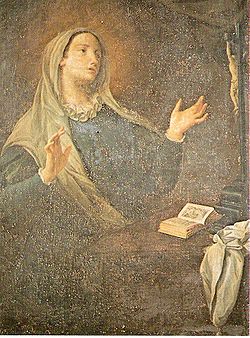 After Catherine of Siena and Catherine of Bologna, today I would like to speak to you about another Saint: Catherine of Genoa, known above all for her vision of purgatory. The text that describes her life and thought was published in this Ligurian city in 1551. It is in three sections: her Vita [Life], properly speaking, the Dimostratione et dechiaratione del purgatorio — better known as Treatise on purgatory — and her Dialogo tra l’anima e il corpo (cf. Libro de la Vita mirabile et dottrina santa, de la beata Caterinetta da Genoa. Nel quale si contiene una utile et catholica dimostratione et dechiaratione del purgatorio, Genoa 1551). The final version was written by Catherine’s confessor, Fr Cattaneo Marabotto.

Catherine was born in Genoa in 1447. She was the youngest of five. Her father, Giacomo Fieschi, died when she was very young. Her mother, Francesca di Negro provided such an effective Christian education that the elder of her two daughters became a religious.

When Catherine was 16, she was given in marriage to Giuliano Adorno, a man who after various trading and military experiences in the Middle East had returned to Genoa in order to marry.

Married life was far from easy for Catherine, partly because of the character of her husband who was given to gambling. Catherine herself was at first induced to lead a worldly sort of life in which, however, she failed to find serenity. After 10 years, her heart was heavy with a deep sense of emptiness and bitterness.

A unique experience on 20 March 1473 sparked her conversion. She had gone to the Church of San Benedetto in the monastery of Nostra Signora delle Grazie [Our Lady of Grace], to make her confession and, kneeling before the priest, “received”, as she herself wrote, “a wound in my heart from God’s immense love”. It came with such a clear vision of her own wretchedness and shortcomings and at the same time of God’s goodness, that she almost fainted.

Her heart was moved by this knowledge of herself — knowledge of the empty life she was leading and of the goodness of God. This experience prompted the decision that gave direction to her whole life. She expressed it in the words: “no longer the world, no longer sin” (cf. Vita Mirabile, 3rv). Catherine did not stay to make her Confession.

On arriving home she entered the remotest room and spent a long time weeping. At that moment she received an inner instruction on prayer and became aware of God’s immense love for her, a sinner. It was a spiritual experience she had no words to  describe ( cf. Vita Mirabile, 4r).

It was on this occasion that the suffering Jesus appeared to her, bent beneath the Cross, as he is often portrayed in the Saint’s iconography. A few days later she returned to the priest to make a good confession at last. It was here that began the “life of purification” which for many years caused her to feel constant sorrow for the sins she had committed and which spurred her to impose forms of penance and sacrifice upon herself, in order to show her love to God.

On this journey Catherine became ever closer to the Lord until she attained what is called “unitive life”, namely, a relationship of profound union with God.

In her Vita it is written that her soul was guided and instructed from within solely by the sweet love of God which gave her all she needed. Catherine surrendered herself so totally into the hands of the Lord that she lived, for about 25 years, as she wrote, “without the assistance of any creature, taught and governed by God alone” (Vita, 117r-118r), nourished above all by constant prayer and by Holy Communion which she received every day, an unusual practice in her time. Only many years later did the Lord give her a priest who cared for her soul.

Catherine was always reluctant to confide and reveal her experience of mystical communion with God, especially because of the deep humility she felt before the Lord’s graces. The prospect of glorifying him and of being able to contribute to the spiritual journey of others alone spurred her to recount what had taken place within her, from the moment of her conversion, which is her original and fundamental experience.

The place of her ascent to mystical peaks was Pammatone Hospital, the largest hospital complex in Genoa, of which she was director and animator. Hence Catherine lived a totally active existence despite the depth of her inner life. In Pammatone a group of followers, disciples and collaborators formed around her, fascinated by her life of faith and her charity.

Indeed her husband, Giuliano Adorno, was so so won over that he gave up his dissipated life, became a Third Order Franciscan and moved into the hospital to help his wife.

Catherine’s dedication to caring for the sick continued until the end of her earthly life on 15 September 1510. From her conversion until her death there were no extraordinary events but two elements characterize her entire life: on the one hand her mystical experience, that is, the profound union with God, which she felt as spousal union, and on the other, assistance to the sick, the organization of the hospital and service to her neighbour, especially the neediest and the most forsaken. These two poles, God and neighbour, totally filled her life, virtually all of which she spent within the hospital walls.

Dear friends, we must never forget that the more we love God and the more constantly we pray, the better we will succeed in truly loving those who surround us, who are close to us, so that we can see in every person the Face of the Lord whose love knows no bounds and makes no distinctions. The mystic does not create distance from others or an abstract life, but rather approaches other people so that they may begin to see and act with God’s eyes and heart.

Catherine’s thought on purgatory, for which she is particularly well known, is summed up in the last two parts of the book mentioned above: The Treatise on purgatory and the Dialogues between the body and the soul. It is important to note that Catherine, in her mystical experience, never received specific revelations on purgatory or on the souls being purified there. Yet, in the writings inspired by our Saint, purgatory is a central element and the description of it has characteristics that were original in her time.

The first original passage concerns the “place” of the purification of souls. In her day it was depicted mainly using images linked to space: a certain space was conceived of in which purgatory was supposed to be located.

Catherine, however, did not see purgatory as a scene in the bowels of the earth: for her it is not an exterior but rather an interior fire. This is purgatory: an inner fire.

The Saint speaks of the Soul’s journey of purification on the way to full communion with God, starting from her own experience of profound sorrow for the sins committed, in comparison with God’s infinite love (cf. Vita Mirabile, 171v).

We heard of the moment of conversion when Catherine suddenly became aware of God’s goodness, of the infinite distance of her own life from this goodness and of a burning fire within her. And this is the fire that purifies, the interior fire of purgatory. Here too is an original feature in comparison with the thought of her time.

In fact, she does not start with the afterlife in order to recount the torments of purgatory — as was the custom in her time and perhaps still is today — and then to point out the way to purification or conversion. Rather our Saint begins with the inner experience of her own life on the way to Eternity.

“The soul”, Catherine says, “presents itself to God still bound to the desires and suffering that derive from sin and this makes it impossible for it to enjoy the beatific vision of God”. Catherine asserts that God is so pure and holy that a soul stained by sin cannot be in the presence of the divine majesty (cf. Vita Mirabile, 177r).

We too feel how distant we are, how full we are of so many things that we cannot see God. The soul is aware of the immense love and perfect justice of God and consequently suffers for having failed to respond in a correct and perfect way to this love; and love for God itself becomes a flame, love itself cleanses it from the residue of sin.

In Catherine we can make out the presence of theological and mystical sources on which it was normal to draw in her time. In particular, we find an image typical of Dionysius the Areopagite: the thread of gold that links the human heart to God himself. When God purified man, he bound him with the finest golden thread, that is, his love, and draws him toward himself with such strong affection that man is as it were “overcome and won over and completely beside himself”.

Thus man’s heart is pervaded by God’s love that becomes the one guide, the one driving force of his life (cf. Vita Mirabile, 246rv). This situation of being uplifted towards God and of surrender to his will, expressed in the image of the thread, is used by Catherine to express the action of divine light on the souls in purgatory, a light that purifies and raises them to the splendour of the shining radiance of God (cf. Vita Mirabile, 179r).

With her life St Catherine teaches us that the more we love God and enter into intimacy with him in prayer the more he makes himself known to us, setting our hearts on fire with his love.

In writing about purgatory, the Saint reminds us of a fundamental truth of faith that becomes for us an invitation to pray for the deceased so that they may attain the beatific vision of God in the Communion of Saints (cf. Catechism of the Catholic Church, n. 1032).

Moreover the humble, faithful and generous service in Pammatone Hospital that the Saint rendered throughout her life is a shining example of charity for all and an encouragement, especially for women who, with their precious work enriched by their sensitivity and attention to the poorest and neediest, make a fundamental contribution to society and to the Church. Many thanks.