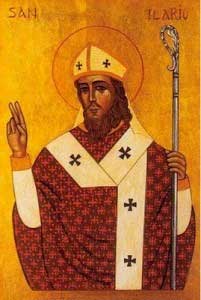 Born of wealthy polytheistic, pagan nobility, Hilary’s early life was uneventful as he married, had children (including Saint Abra), and studied on his own. Through his studies he came to believe in salvation through good works, then monotheism. As he studied the Bible for the first time, he literally read himself into the faith, and was converted by the end of the New Testament.

Hilary lived the faith so well he was made bishop of Poitiers from 353 to 368. Hilary opposed the emperor’s attempt to run Church matters, and was exiled; he used the time to write works explaining the faith. His teaching and writings converted many, and in an attempt to reduce his notoriety he was returned to the small town of Poitiers where his enemies hoped he would fade into obscurity. His writings continued to convert pagans.

“Obtain, O Lord, that I may keep ever faithful to what I have professed in the symbol of my regeneration, when I was baptized in the Father, in the Son and in the Holy Spirit. That I may worship you, our Father, and with you, your Son; that I may deserve your Holy Spirit, who proceeds from you through your Only Begotten Son… Amen”