Join Dr. Anthony Lilles and Kris McGregor as they offer a type of “online retreat” based on the spiritual work Heart of the World written by Fr. Hans Urs von Balthasar.

In part one of this second “conference” talk, Dr. Lilles reflects upon “The Coming of the Light”

Here is the excerpt that is read in the conference:

The Word, however, came from above. It came from the fullness of the Father. In the Word there was no urge since it was itself the fullness. In him was light and life and love without lust, love which had compassion for the void, willing to fill up what was hollow. But it was the essence of the void itself to press on to fullness. It was a menacing void, a chasm fitted with teeth. The light came into the darkness, but the darkness had no eye for the light: it had only jaws. The light came to illumine those who sit in the shadow of tombs, and such illumination required that the radiance of the light be recognized and that one be oneself transformed into streaming light. This would mean the death of the urge and its resurrection as love.

Man wants to soar up, but the Word wants to descend. Thus will the two meet half-way, in the middle, in the place of the Mediator. But they will cross like swords cross; their wills are opposed to one another. For God and man are related in a manner far different from man and woman: in no way do they complete one another. And we may not say that, to show his fullness, God needs the void, as man needs fullness to nourish his void. Nor that God descends so that man may ascend. If this were the mediation, then man would indeed have swallowed God’s love up into himself, but only as fodder and fuel for his addictive urge. His will to power would finally have over. powered God, and thus the Word would be strangled and the darkness would not have grasped it. And man’s final condition would be worse than his first, for he would have encircled in the narrow spell of his ego not only his fellow-man, but also the Creator himself, degrading him to the role of a lever for his egotistic yearning.

But if, rather, they were really to encounter one another, what road had to be followed? The darkness had to become brighter; blind urge had to pass over into a love that sees; and the clever will to possess and develop had to be transfigured into the foolish wisdom that pours itself out. And then a new instruction was issued: instead of going past God’s Word in its descent and pursuing the rash ascent to the Father, we are now to turn around and, along with the Word, go back down the steps we have climbed, find God on the road to the world, on no road other than that by which the Son journeys on towards the Father.  For only love redeems. Yet, what love is God only knows, for God is love. There are not two sorts of love. There is not, alongside God’s love, another, human love. Rather, when God so determines and he proclaims his Word, love then descends, love then flows out into the void, and God has set up his claim and his emblem over every love.

Though having the “Heart of the World” mentioned in this “retreat” is not necessary, we would encourage you at some to purchase this outstanding spiritual classic. 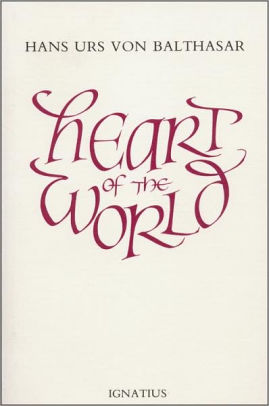 You find the book here

A great Catholic theologian speaks from the heart about the Heart of Christ, in a profound and lyrical meditation on Our Lord’s love for his Bride the Church.

Anthony Lilles, S.T.D. is the St. Patrick’s Seminary & University in Menlo Park, CA.  He has served the Church and assisted in the formation of clergy since 1994, and now previously served in the Archdiocese of Los Angeles as Academic Dean of St. John’s Seminary, associate professor of theology and Academic Advisor of Juan Diego House. The son of a California farmer, married with young adult children, he holds a BA in theology from the Franciscan University of Steubenville with both the ecclesiastical licentiate and doctorate in spiritual theology from the Pontifical University of Saint Thomas Aquinas in Rome (the Angelicum). He was a founding faculty member of Saint John Vianney Seminary in Denver where he also served as academic dean, department chair, director of liturgy and coordinator of spiritual formation for the permanent deacon program. He has recently published Hidden Mountain Secret Garden, Omaha: Discerning Hearts (2012)

1 thought on “Heart of the World – Conference 2 Part 1 – Meditations on the Paschal Mystery with Dr. Anthony Lilles and Kris McGregor”