For more on St. Hildegard von Bingen and her teachings

Proclaiming Saint Hildegard of Bingen,
professed nun of the Order of Saint Benedict,
a Doctor of the Universal Church

1. A “light for her people and her time”: in these words Blessed John Paul II, my Venerable Predecessor, described Saint Hildegard of Bingen in 1979, on the occasion of the eight-hundredth anniversary of the death of this German mystic. This great woman truly stands out crystal clear against the horizon of history for her holiness of life and the originality of her teaching. And, as with every authentic human and theological experience, her authority reaches far beyond the confines of a single epoch or society; despite the distance of time and culture, her thought has proven to be of lasting relevance. 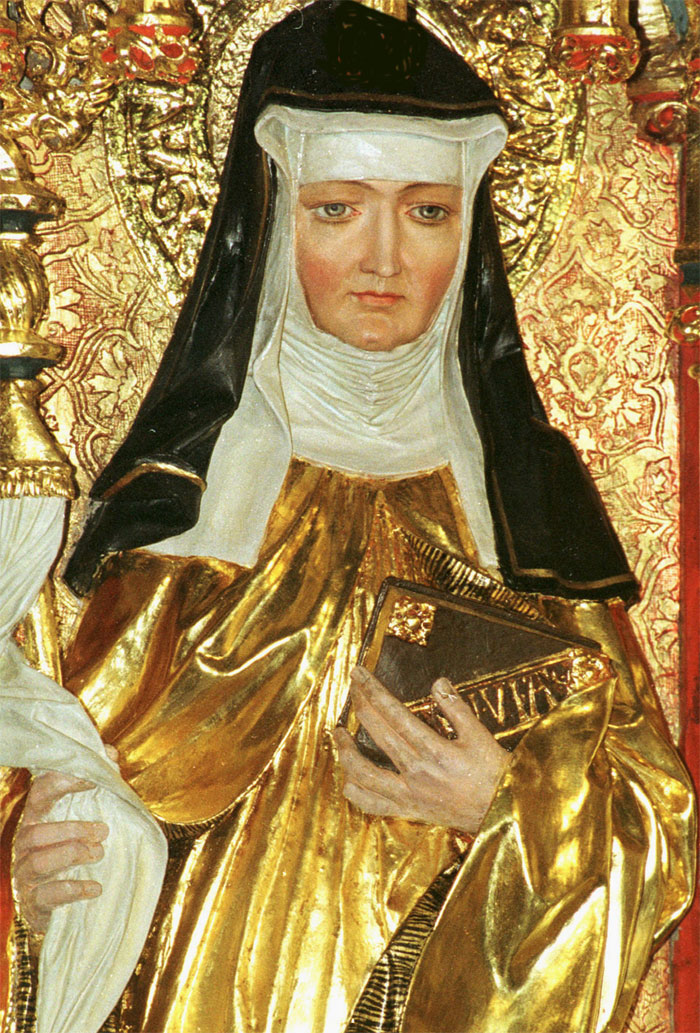 In Saint Hildegard of Bingen there is a wonderful harmony between teaching and daily life. In her, the search for God’s will in the imitation of Christ was expressed in the constant practice of virtue, which she exercised with supreme generosity and which she nourished from biblical, liturgical and patristic roots in the light of the Rule of Saint Benedict. Her persevering practice of obedience, simplicity, charity and hospitality was especially visible.

In her desire to belong completely to the Lord, this Benedictine Abbess was able to bring together rare human gifts, keen intelligence and an ability to penetrate heavenly realities.

2. Hildegard was born in 1098 at Bermersheim, Alzey, to parents of noble lineage who were wealthy landowners. At the age of eight she was received as an oblate at the Benedictine Abbey of Disibodenberg, where in 1115 she made her religious profession. Upon the death of Jutta of Sponheim, around the year 1136, Hildegard was called to succeed her as magistra. Infirm in physical health but vigorous in spirit, she committed herself totally to the renewal of religious life. At the basis of her spirituality was the Benedictine Rule which views spiritual balance and ascetical moderation as paths to holiness. Following the increase in vocations to the religious life, due above all to the high esteem in which Hildegard was held, around 1150 she founded a monastery on the hill of Rupertsberg, near Bingen, where she moved with twenty sisters. In 1165, she established another monastery on the opposite bank of the Rhine. She was the Abbess of both.

Within the walls of the cloister, she cared for the spiritual and material well-being of her sisters, fostering in a special way community life, culture and the liturgy. In the outside world she devoted herself actively to strengthening the Christian faith and reinforcing religious practice, opposing the heretical trends of the Cathars, promoting Church reform through her writings and preaching and contributing to the improvement of the discipline and life of clerics. At the invitation first of Hadrian IV and later of Alexander III, Hildegard practised a fruitful apostolate, something unusual for a woman at that time, making several journeys, not without hardship and difficulty, to preach even in public squares and in various cathedral churches, such as at Cologne, Trier, Liège, Mainz, Metz, Bamberg and Würzburg. The profound spirituality of her writings had a significant influence both on the faithful and on important figures of her time and brought about an incisive renewal of theology, liturgy, natural sciences and music. Stricken by illness in the summer of 1179, Hildegard died in the odour of sanctity, surrounded by her sisters at the monastery of Rupertsberg, Bingen, on 17 September 1179

3. In her many writings Hildegard dedicated herself exclusively to explaining divine revelation and making God known in the clarity of his love. Hildegard’s teaching is considered eminent both for its depth, the correctness of its interpretation, and the originality of its views. The texts she produced are refreshing in their authentic “intellectual charity” and emphasize the power of penetration and comprehensiveness of her contemplation of the mystery of the Blessed Trinity, the Incarnation, the Church, humanity and nature as God’s creation, to be appreciated and respected.

These works were born from a deep mystical experience and propose a perceptive reflection on the mystery of God.

The Lord endowed her with a series of visions from childhood, whose content she dictated to the Benedictine monk Volmar, her secretary and spiritual advisor, and to Richardis von Stade, one of her women religious. But particularly illuminating are the judgments expressed by Saint Bernard of Clairvaux, who encouraged her, and especially by Pope Eugene III, who in 1147 authorized her to write and to speak in public. Theological reflection enabled Hildegard to organize and understand, at least in part, the content of her visions. In addition to books on theology and mysticism, she also authored works on medicine and natural sciences. Her letters are also numerous — about four hundred are extant; these were addressed to simple people, to religious communities, popes, bishops and the civil authorities of her time. She was also a composer of sacred music. The corpus of her writings, for their quantity, quality and variety of interests, is unmatched by any other female author of the Middle Ages.

Her main writings are the Scivias, the Liber Vitae Meritorum and the Liber Divinorum Operum. They relate her visions and the task she received from the Lord to transcribe them. In the author’s view her Letters were no less important; they bear witness to the attention Hildegard paid to the events of her time, which she interpreted in the light of the mystery of God. In addition there are 58 sermons, addressed directly to her sisters. They are her Expositiones Evangeliorum, containing a literary and moral commentary on Gospel passages related to the main celebrations of the liturgical year. Her artistic and scientific works focus mainly on music, in the Symphonia Harmoniae Caelestium Revelationum; on medicine, in the Liber Subtilitatum Diversarum Naturarum Creaturarum and in the Causae et Curae, and on natural sciences in the Physica. Finally her linguistic writings are also noteworthy, such as the Lingua Ignota and the Litterae Ignotae, in which the words appear in an unknown language of her own invention, but are composed mainly of phonemes present in German.

Hildegard’s language, characterized by an original and effective style, makes ample use of poetic expressions and is rich in symbols, dazzling intuitions, incisive comparisons and evocative metaphors.

4. With acute wisdom-filled and prophetic sensitivity, Hildegard focused her attention on the event of revelation. Her investigation develops from the biblical page in which, in successive phases, it remains firmly anchored. The range of vision of the mystic of Bingen was not limited to treating individual matters but sought to offer a global synthesis of the Christian faith. Hence in her visions and her subsequent reflections she presents a compendium of the history of salvation from the beginning of the universe until its eschatological consummation. God’s decision to bring about the work of creation is the first stage on this immensely long journey which, in the light of sacred Scripture, unfolds from the constitution of the heavenly hierarchy until it reaches the fall of the rebellious angels and the sin of our first parents.

This initial picture is followed by the redemptive Incarnation of the Son of God, the activity of the Church that extends in time the mystery of the Incarnation and the struggle against Satan. The definitive Coming of the Kingdom of God and the Last Judgement crown this work.

Hildegard asks herself and us the fundamental question, whether it is possible to know God: This is theology’s principal task. Her answer is completely positive: through faith, as through a door, the human person is able to approach this knowledge. God, however, always retains his veil of mystery and incomprehensibility. He makes himself understandable in creation but, creation itself is not fully understood when detached from God. Indeed, nature considered in itself provides only pieces of information which often become an occasion for error and abuse. Faith, therefore, is also necessary in the natural cognitive process, for otherwise knowledge would remain limited, unsatisfactory and misleading.