For more on St. John Damascene and his teachings

Today I should like to speak about John Damascene, a personage of prime importance in the history of Byzantine Theology, a great Doctor in the history of the Universal Church. Above all he was an eyewitness of the passage from the Greek and Syrian Christian cultures shared by the Eastern part of the Byzantine Empire, to the Islamic culture, which spread through its military conquests in the territory commonly known as the Middle or Near East. John, born into a wealthy Christian family, at an early age assumed the role, perhaps already held by his father, of Treasurer of the Caliphate. Very soon, however, dissatisfied with life at court, he decided on a monastic life, and entered the monastery of Mar Saba, near Jerusalem. This was around the year 700. He never again left the monastery, but dedicated all his energy to ascesis and literary work, not disdaining a certain amount of pastoral activity, as is shown by his numerous homilies. His liturgical commemoration is on the 4 December. Pope Leo XIII proclaimed him Doctor of the Universal Church in 1890. 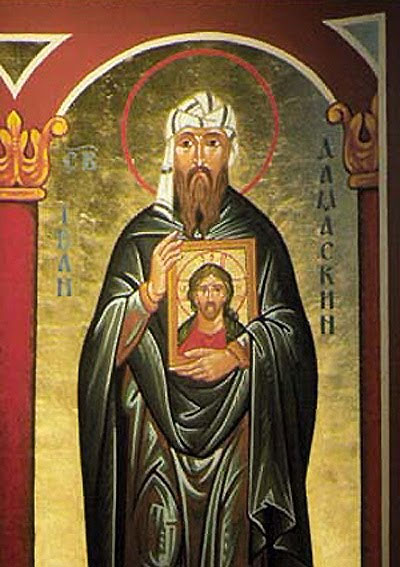 In the East, his best remembered works are the three Discourses against those who calumniate which were condemned after his death by the iconoclastic Council of Hieria (754). These discourses, however, were also the fundamental grounds for his rehabilitation and canonization on the part of the Orthodox Fathers summoned to the Council of Nicaea (787), the Seventh Ecumenical Council. In these texts it is possible to trace the first important theological attempts to legitimise the veneration of sacred images, relating them to the mystery of the Incarnation of the Son of God in the womb of the Virgin Mary.

John Damascene was also among the first to distinguish, in the cult, both public and private, of the Christians, between worship (latreia), and veneration (proskynesis): the first can only be offered to God, spiritual above all else, the second, on the other hand, can make use of an image to address the one whom the image represents. Obviously the Saint can in no way be identified with the material of which the icon is composed. This distinction was immediately seen to be very important in finding an answer in Christian terms to those who considered universal and eternal the strict Old Testament prohibition against the use of cult images. This was also a matter of great debate in the Islamic world, which accepts the Jewish tradition of the total exclusion of cult images. Christians, on the other hand, in this context, have discussed the problem and found a justification for the veneration of images. John Damascene writes, “In other ages God had not been represented in images, being incorporate and faceless. But since God has now been seen in the flesh, and lived among men, I represent that part of God which is visible. I do not venerate matter, but the Creator of matter, who became matter for my sake and deigned to live in matter and bring about my salvation through matter. I will not cease therefore to venerate that matter through which my salvation was achieved. But I do not venerate it in absolute terms as God! How could that which, from non-existence, has been given existence, be God?… But I also venerate and respect all the rest of matter which has brought me salvation, since it is full of energy and Holy graces. Is not the wood of the Cross, three times blessed, matter?… And the ink, and the most Holy Book of the Gospels, are they not matter? The redeeming altar which dispenses the Bread of life, is it not matter?… And, before all else, are not the flesh and blood of Our Lord matter? Either we must suppress the sacred nature of all these things, or we must concede to the tradition of the Church the veneration of the images of God and that of the friends of God who are sanctified by the name they bear, and for this reason are possessed by the grace of the Holy Spirit. Do not, therefore, offend matter: it is not contemptible, because nothing that God has made is contemptible” (cf. Contra imaginum calumniatores, I, 16, ed. Kotter, pp. 89-90). We see that as a result of the Incarnation, matter is seen to have become divine, is seen as the habitation of God. It is a new vision of the world and of material reality. God became flesh and flesh became truly the habitation of God, whose glory shines in the human Face of Christ. Thus the arguments of the Doctor of the East are still extremely relevant today, considering the very great dignity that matter has acquired through the Incarnation, capable of becoming, through faith, a sign and a sacrament, efficacious in the meeting of man with God. John Damascene remains, therefore, a privileged witness of the cult of icons, which would come to be one of the most distinctive aspects of Eastern spirituality up to the present day. It is, however, a form of cult which belongs simply to the Christian faith, to the faith in that God who became flesh and was made visible. The teaching of Saint John Damascene thus finds its place in the tradition of the universal Church, whose sacramental doctrine foresees that material elements taken from nature can become vehicles of grace by virtue of the invocation (epiclesis) of the Holy Spirit, accompanied by the confession of the true faith.