Died: March 12, 604 AD, Rome, Italy
For more on St. Gregory the Great and his teachings

Today I would like to present the figure of one of the greatest Fathers in the history of the Church, one of four Doctors of the West, Pope St Gregory, who was Bishop of Rome from 590 to 604, and who earned the traditional title of Magnus/the Great. Gregory was truly a great Pope and a great Doctor of the Church! He was born in Rome about 540 into a rich patrician family of the gens Anicia, who were distinguished not only for their noble blood but also for their adherence to the Christian faith and for their service to the Apostolic See. Two Popes came from this family: Felix III (483-492), the great-great grandfather of Gregory, and Agapetus (535-536). The house in which Gregory grew up stood on the Clivus Scauri, surrounded by majestic buildings that attested to the greatness of ancient Rome and the spiritual strength of Christianity. The example of his parents Gordian and Sylvia, both venerated as Saints, and those of his father’s sisters, Aemiliana and Tharsilla, who lived in their own home as consecrated virgins following a path of prayer and self-denial, inspired lofty Christian sentiments in him. 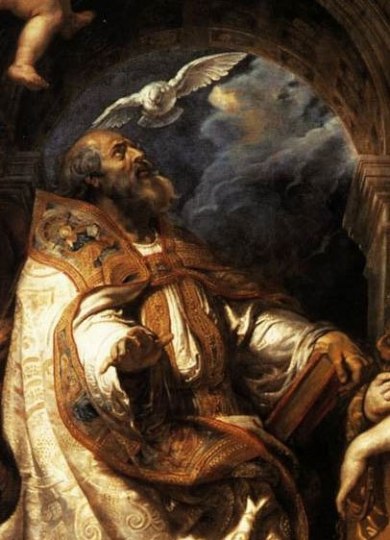 In the footsteps of his father, Gregory entered early into an administrative career which reached its climax in 572 when he became Prefect of the city. This office, complicated by the sorry times, allowed him to apply himself on a vast range to every type of administrative problem, drawing light for future duties from them. In particular, he retained a deep sense of order and discipline: having become Pope, he advised Bishops to take as a model for the management of ecclesial affairs the diligence and respect for the law like civil functionaries . Yet this life could not have satisfied him since shortly after, he decided to leave every civil assignment in order to withdraw to his home to begin the monastic life, transforming his family home into the monastery of St Andrew on the Coelian Hill. This period of monastic life, the life of permanent dialogue with the Lord in listening to his word, constituted a perennial nostalgia which he referred to ever anew and ever more in his homilies. In the midst of the pressure of pastoral worries, he often recalled it in his writings as a happy time of recollection in God, dedication to prayer and peaceful immersion in study. Thus, he could acquire that deep understanding of Sacred Scripture and of the Fathers of the Church that later served him in his work.

But the cloistered withdrawal of Gregory did not last long. The precious experience that he gained in civil administration during a period marked by serious problems, the relationships he had had in this post with the Byzantines and the universal respect that he acquired induced Pope Pelagius to appoint him deacon and to send him to Constantinople as his “apocrisarius” – today one would say “Apostolic Nuncio” in order to help overcome the last traces of the Monophysite controversy and above all to obtain the Emperor’s support in the effort to check the Lombard invaders. The stay at Constantinople, where he resumed monastic life with a group of monks, was very important for Gregory, since it permitted him to acquire direct experience of the Byzantine world, as well as to approach the problem of the Lombards, who would later put his ability and energy to the test during the years of his Pontificate. After some years he was recalled to Rome by the Pope, who appointed him his secretary. They were difficult years: the continual rain, flooding due to overflowing rivers, the famine that afflicted many regions of Italy as well as Rome. Finally, even the plague broke out, which claimed numerous victims, among whom was also Pope Pelagius II. The clergy, people and senate were unanimous in choosing Gregory as his successor to the See of Peter. He tried to resist, even attempting to flee, but to no avail: finally, he had to yield. The year was 590.