VATICAN CITY, 16 FEB 2011 (VIS) – In his general audience today, held in the Paul VI Hall, the Pope focused his attention on St. John of the Cross, “spiritual friend to St. Teresa and, with her, reformer of the Carmelite religious family. Proclaimed a Doctor of the Church by Pius XI in 1926, he is traditionally known as the ‘Doctor mysticus’, the Mystical Doctor”, the Holy Father said.

John was born to a poor family at Fontiveros near the Spanish town of Avila in 1542 and entered the Carmelite order at Medina del Campo. Ordained a priest in 1567, it was on the occasion of his first Mass that he met Teresa, “who explained to him her plan for the reform of the Carmelites”. In his renewal of his religious profession John took the name “of the Cross” and collaborated enthusiastically in the process of reform, something “which brought him great suffering”, and even led to his imprisonment following an unjust accusation. While preparing a journey to Mexico he fell seriously ill and died in December 1591. He was beatified by Clement X in 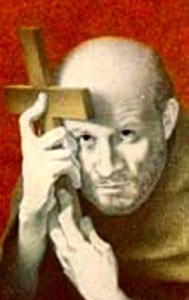 St. John of the Cross, said Benedict XVI, “is considered one of most important lyric poets of Spanish literature. He wrote four major works: ‘Ascent of Mount Carmel’, ‘Dark Night of the Soul‘, ‘Spiritual Canticle’ and ‘Living Flame of Love‘.

“In his ‘Spiritual Canticle’ St. John outlines the soul’s journey of purification”, the Holy Father added. “The ‘Living Flame of Love’ continues in the same line, describing in greater detail the condition of union with God. … ‘Ascent of Mount Carmel’ outlines the spiritual itinerary from the point of view of a progressive purification of the soul, which is necessary in order to scale the heights of Christian perfection, symbolised by the summit of Mount Carmel”.

The Pope continued his catechesis by explaining how “the ‘Dark Night of the Soul’ describes the ‘passive’ aspect; in other words, God’s contribution to the process of purifying the soul. Human effort alone, in fact, is incapable of reaching the deepest roots of a person’s bad inclinations and habits. It can halt them but not eradicate them completely. To do this, we need a special action by God which radically purifies the spirit and disposes it to the union of love with Him“. 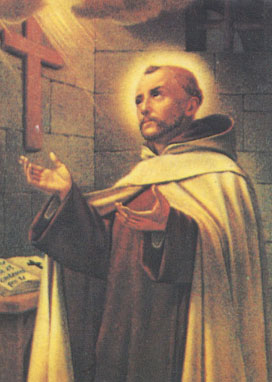 “The rate of increase of faith, hope and charity goes hand in hand with the work of purification and with progressive union with God, until attaining transformation into Him. When this goal is reached, the soul is immersed in Trinitarian life itself. … This is why the Mystical Doctor held that there is no true union of love with God that does not culminate in Trinitarian union”.

The Pope completed his remarks by asking whether the life of St. John of the Cross has anything to say to everyday Christians, or whether it is an example only for the few select souls who can follow the path of purification and mystical ascesis. “The journey with Christ, travelling with Christ … is not an additional weight to the already sufficiently-heavy burden of our lives”, he said. “It is something totally different. … It is a light, a power which helps us carry our everyday burden. … Allowing ourselves to be loved by Christ is the light which helps us to carry the daily burden, and sanctity is not a task we must accomplish on our own, a very difficult task. … Let us ask God to help us become saints, to allow ourselves to be loved by God, which is the vocation and true redemption of us all”.