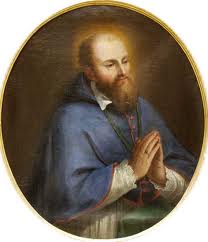 VATICAN CITY, 2 MAR 2011 (VIS) – During today’s general audience, which was held in the Paul VI Hall, the Pope spoke about St. Francis de Sales, bishop and doctor of the Church who lived in the sixteenth and seventeenth centuries.

Born in 1567 to a noble family in the Duchy of Savoy, while still very young Francis, “reflecting on the ideas of St. Augustine and St. Thomas Aquinas, underwent a profound crisis which led him to question himself about his own eternal salvation and about the destiny God had in store for him, experiencing the principle theological questions of his time as an authentic spiritual drama“. The saint “found peace in the radical and liberating truth of God’s love: loving Him without asking anything in return and trusting in divine love; this would be the secret of his life”.

Francis de Sales, the Holy Father explained, was ordained a priest in 1593 and consecrated as bishop of Geneva in 1602, “in a period in which the city was a stronghold of Calvinism. … He was an apostle, preacher, writer, man of action and of prayer; committed to realising the ideals of the Council of Trent, and involved in controversies and dialogue with Protestants. Yet, over and above the necessary theological debate, he also experienced the effectiveness of personal relations and of charity”.

With St. Jane Frances de Chantal he founded the Order of the Visitation, characterised “by a complete consecration to God lived in simplicity and humility“. St. Francis of Sales died in 1622.

In his book “An Introduction to the Devout Life”, the saint “made a call which may have appeared revolutionary at that time: the invitation to belong completely to God while being fully present in the world. … Thus arose that appeal to the laity, that concern for the consecration of temporal things and for the sanctification of daily life upon which Vatican Council II and the spirituality of our time have laid such emphasis”.

Referring then to the saint’s fundamental work, his “Treatise on the Love of God”, the Pope highlighted how “in a period of intense mysticism” it “was an authentic ‘summa’ and at the same time a fascinating literary work. … Following the model of Holy Scripture, St. Francis of Sales speaks of the union between God and man, creating a whole series of images of interpersonal relationships. His God is Father and Lord, Bridegroom and Friend”.

The treatise contains “a profound meditation on human will and a description of how it flows, passes and dies, in order to live in complete abandonment, not only to the will of God, but to what pleases Him, … to His pleasure. At the apex of the union with God, beyond the rapture of contemplative ecstasy, lies that well of concrete charity which is attentive to all the needs of others”.

Benedict XVI concluded his catechesis by noting that “in a time such as our own, which seeks freedom, … we must not lose sight of the relevance of this great master of spirituality and peace who gave his disciples the ‘spirit of freedom’, true freedom, at the summit of which is a fascinating and comprehensive lesson about the truth of love. St. Francis of Sales is an exemplary witness of Christian humanism. With his familiar style, with his parables which sometimes contain a touch of poetry, he reminds us that inscribed in the depths of man is nostalgia for God, and that only in Him can we find true joy and complete fulfilment”. In time of desolation never to make a change; but to be firm and constant in the resolutions and determination in which one was the day preceding such desolation, or in the determination in which he was in the preceding consolation. Because, as in consolation it is rather the good spirit who guides and counsels us, so in desolation it is the bad, with whose counsels we cannot take a course to decide rightly.. The Discernment of Spirits: Setting the Captives Free – Serves as an introduction to the Spiritual Exercises of St. Ignatius of Loyola

The 14 Rules for Discerning Spirits –
“The Different Movements Which Are Caused In The Soul”
as outlined by St. Ignatius of Loyola can be found here

Father Timothy M. Gallagher, O.M.V., was ordained in 1979 as a member of the Oblates of the Virgin Mary, a religious community dedicated to retreats and spiritual formation according to the Spiritual Exercises of St. Ignatius.  Fr. Gallagher is featured on the EWTN series “Living the Discerning Life:  The Spiritual Teachings of St. Ignatius of Loyola”.

For more information on how to obtain copies of Fr. Gallaghers’s various books and audio which are available for purchase, please visit  his  website: www.frtimothygallagher.org

For the other episodes in this series visit
Fr. Timothy Gallagher’s “Discerning Hearts” page