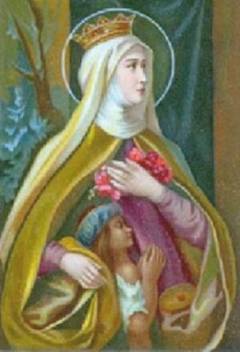 Today I would like to speak to you about one of the women of the Middle Ages who inspired the greatest admiration; she is St Elizabeth of Hungary, also called St Elizabeth of Thuringia.

Elizabeth was born in 1207; historians dispute her birthplace. Her father was Andrew ii, the rich and powerful King of Hungary. To reinforce political ties he had married the German Countess Gertrude of Andechs-Meran, sister of St Hedwig who was wife to the Duke of Silesia. Elizabeth, together with her sister and three brothers, spent only the first four years of her childhood at the Hungarian court. She liked playing, music and dancing; she recited her prayers faithfully and already showed special attention to the poor, whom she helped with a kind word or an affectionate gesture.

Her happy childhood was suddenly interrupted when some knights arrived from distant Thuringia to escort her to her new residence in Central Germany. In fact, complying with the customs of that time, Elizabeth’s father had arranged for her to become a Princess of Thuringia. The Landgrave or Count of this region was one of the richest and most influential sovereigns in Europe at the beginning of the 13th century and his castle was a centre of magnificence and culture.

However, the festivities and apparent glory concealed the ambition of feudal princes who were frequently warring with each other and in conflict with the royal and imperial authorities.

In this context the Landgrave Hermann very willingly accepted the betrothal of his son Ludwig to the Hungarian Princess. Elizabeth left her homeland with a rich dowry and a large entourage, including her personal ladies-in-waiting, two of whom were to remain faithful friends to the very end. It is they who left us the precious information on the childhood and life of the Saint.

They reached Eisenach after a long journey and made the ascent to the Fortress of Wartburg, the strong castle towering over the city. It was here that the betrothal of Ludwig and Elizabeth was celebrated. In the ensuing years, while Ludwig learned the knightly profession, Elizabeth and her companions studied German, French, Latin, music, literature and embroidery. Despite the fact that political reasons had determined their betrothal, a sincere love developed between the two young people, enlivened by faith and by the desire to do God’s will. On his father’s death when Ludwig was 18 years old, he began to reign over Thuringia.

Elizabeth, however, became the object of critical whispers because her behaviour was incongruous with court life. Hence their marriage celebrations were far from sumptuous and a part of the funds destined for the banquet was donated to the poor.

With her profound sensitivity, Elizabeth saw the contradictions between the faith professed and Christian practice. She could not bear compromise. Once, on entering a church on the Feast of the Assumption, she took off her crown, laid it before the Crucifix and, covering her face, lay prostrate on the ground. When her mother-in-law reprimanded her for this gesture, Elizabeth answered: “How can I, a wretched creature, continue to wear a crown of earthly dignity, when I see my King Jesus Christ crowned with thorns?”.

She behaved to her subjects in the same way that she behaved to God. Among the Sayings of the four maids we find this testimony: “She did not eat any food before ascertaining that it came from her husband’s property or legitimate possessions. While she abstained from goods procured illegally, she also did her utmost to provide compensation to those who had suffered violence” (nn. 25 and 37).

She is a true example for all who have roles of leadership: the exercise of authority, at every level, must be lived as a service to justice and charity, in the constant search for the common good.

Elizabeth diligently practiced works of mercy: she would give food and drink to those who knocked at her door, she procured clothing, paid debts, cared for the sick and buried the dead. Coming down from her castle, she often visited the homes of the poor with her ladies-in-waiting, bringing them bread, meat, flour and other food. She distributed the food personally and attentively checked the clothing and mattresses of the poor.

This behaviour was reported to her husband, who not only was not displeased but answered her accusers, “So long as she does not sell the castle, I am happy with her!”. 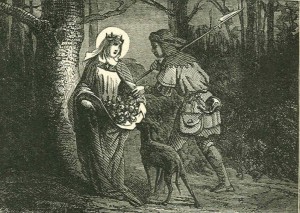 context: while Elizabeth was on her way with her apron filled with bread for the poor, she met her husband who asked her what she was carrying. She opened her apron to show him and, instead of bread, it was full of magnificent roses. This symbol of charity often features in depictions of St Elizabeth.

Elizabeth’s marriage was profoundly happy: she helped her husband to raise his human qualities to a supernatural level and he, in exchange, stood up for his wife’s generosity to the poor and for her religious practices. Increasingly admired for his wife’s great faith, Ludwig said to her, referring to her attention to the poor: “Dear Elizabeth, it is Christ whom you have cleansed, nourished and cared for”. A clear witness to how faith and love of God and neighbour strengthen family life and deepen ever more the matrimonial union.

The young couple found spiritual support in the Friars Minor who began to spread through Thuringia in 1222. Elizabeth chose from among them Friar Rodeger (Rüdiger) as her spiritual director. When he told her about the event of the conversion of Francis of Assisi, a rich young merchant, Elizabeth was even more enthusiastic in the journey of her Christian life.

From that time she became even more determined to follow the poor and Crucified Christ, present in poor people. Even when her first son was born, followed by two other children, our Saint never neglected her charitable works. She also helped the Friars Minor to build a convent at Halberstadt, of which Friar Rodeger became superior. For this reason Elizabeth’s spiritual direction was taken on by Conrad of Marburg.

The farewell to her husband was a hard trial, when, at the end of June in 1227 when Ludwig ivjoined the Crusade of the Emperor Frederick ii. He reminded his wife that this was traditional for the sovereigns of Thuringia. Elizabeth answered him: “Far be it from me to detain you. I have given my whole self to God and now I must also give you”.

However, fever decimated the troops and Ludwig himself fell ill and died in Otranto, before embarking, in September 1227. He was 27 years old. When Elizabeth learned the news, she was so sorrowful that she withdrew in solitude; but then, strengthened by prayer and comforted by the hope of seeing him again in Heaven, she began to attend to the affairs of the Kingdom.

However, another trial was lying in wait for Elizabeth. Her brother-in-law usurped the government of Thuringia, declaring himself to be the true heir of Ludwig and accusing Elizabeth of being a pious woman incapable of ruling. The young widow, with three children, was banished from the Castle of Wartburg and went in search of a place of refuge. Only two of her ladies remained close to her. They accompanied her and entrusted the three children to the care of Ludwig’s friends. Wandering through the villages, Elizabeth worked wherever she was welcomed, looked after the sick, spun thread and cooked.

During this calvary which she bore with great faith, with patience and with dedication to God, a few relatives who had stayed faithful to her and viewed her brother-in-law’s rule as illegal, restored her reputation. So it was that at the beginning of 1228, Elizabeth received sufficient income to withdraw to the family’s castle in Marburg, where her spiritual director, Fra Conrad, also lived. 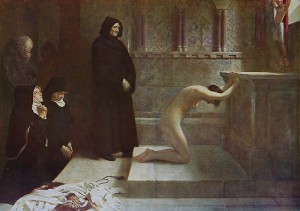 It was he who reported the following event to Pope Gregory ix: “On Good Friday in 1228, having placed her hands on the altar in the chapel of her city, Eisenach, to which she had welcomed the Friars Minor, in the presence of several friars and relatives Elizabeth renounced her own will and all the vanities of the world. She also wanted to resign all her possessions, but I dissuaded her out of love for the poor. Shortly afterwards she built a hospital, gathered the sick and invalids and served at her own table the most wretched and deprived. When I reprimanded her for these things, Elizabeth answered that she received from the poor special grace and humility” (Epistula magistri Conradi, 14-17).

We can discern in this affirmation a certain mystical experience similar to that of St Francis: thePoverello of Assisi declared in his testament, in fact, that serving lepers, which he at first found repugnant, was transformed into sweetness of the soul and of the body (Testamentum, 1-3).

Elizabeth spent her last three years in the hospital she founded, serving the sick and keeping wake over the dying. She always tried to carry out the most humble services and repugnant tasks. She became what we might call a consecrated woman in the world (soror in saeculo) and, with other friends clothed in grey habits, formed a religious community. It is not by chance that she is the Patroness of the Third Order Regular of St Francis and of the Franciscan Secular Order.

In November 1231 she was stricken with a high fever. When the news of her illness spread, may people flocked to see her. After about 10 days, she asked for the doors to be closed so that she might be alone with God. In the night of 17 November, she fell asleep gently in the Lord. The testimonies of her holiness were so many and such that after only four years Pope Gregory ixcanonized her and, that same year, the beautiful church built in her honour at Marburg was consecrated.

Dear brothers and sisters, in St Elizabeth we see how faith and friendship with Christ create a sense of justice, of the equality of all, of the rights of others and how they create love, charity. And from this charity is born hope too, the certainty that we are loved by Christ and that the love of Christ awaits us thereby rendering us capable of imitating Christ and of seeing Christ in others.

St Elizabeth invites us to rediscover Christ, to love him and to have faith; and thereby to find true justice and love, as well as the joy that one day we shall be immersed in divine love, in the joy of eternity with God. Thank you.