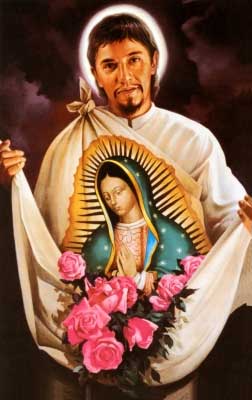 CNA – Born in 1474 in Cuauhtitlán, Mexico, to an Aztec tribe given the name Cuauhtlatoatzin, or “talking eagle.” He belonged to the poorest and most numerous class of the Aztecs, besides that of the slaves. He worked the land and wove mats for a living, and was married although he and his wife had no children.

He converted to Christianity in 1524 and was baptized along with his wife and took the name Juan Diego. He had already been of a mystical character before his baptism, spending long periods of time alone in contemplation.

In 1531, two years after the death of his wife, Maria Lucia, Juan Diego began receiving the famous apparitions of Our Lady of Guadalupe, patron of the Americas, who spoke to him in his native tongue, Nahuatl, and imprinted an image of Herself on his tilma – a poor indian’s cape, and instructed him to have the bishop build a church on the site of the apparition – now the Basilica of Our Lady of Guadalupe, the most visited church in the world, after Saint Peter’s in Rome.

Our Lady of Guadalupe, with Juan Diego’s cooperation, is said to be directly responsible for the 9 million or so conversions to Catholicism by the native Mexican only 20 years after Christianity was introduced to the land by the Spanish.