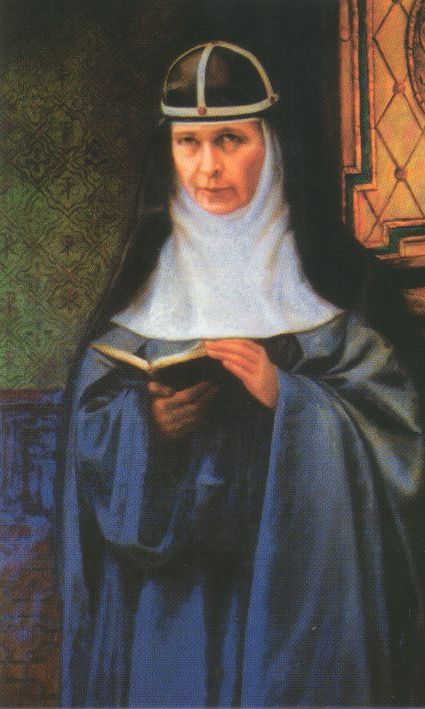 Be sure to visit the St. Bridget Discerning Hearts page!!!

And here is an earlier Discerning Hearts post on St. Bridget!

On the eve of the Great Jubilee in anticipation of the Year 2000 the Venerable Servant of God John Paul II proclaimed St Bridget of Sweden Co-Patroness of the whole of Europe. This morning I would like to present her, her message and the reasons why — still today — this holy woman has much to teach the Church and the world.

We are well acquainted with the events of St Bridget’s life because her spiritual fathers compiled her biography in order to further the process of her canonization immediately after her death in 1373. Bridget was born 70 years earlier, in 1303, in Finster, Sweden, a Northern European nation that for three centuries had welcomed the Christian faith with the same enthusiasm as that with which the Saint had received it from her parents, very devout people who belonged to noble families closely related to the reigning house.

We can distinguished two periods in this Saint’s life.

The first was characterized by her happily married state. Her husband was called Ulf and he was Governor of an important district of the Kingdom of Sweden. The marriage lasted for 28 years, until Ulf’s death. Eight children were born, the second of whom, Karin (Catherine), is venerated as a Saint. This is an eloquent sign of Bridget’s dedication to her children’s education. Moreover, King Magnus of Sweden so appreciated her pedagogical wisdom that he summoned her to Court for a time, so that she could introduce his young wife, Blanche of Namur, to Swedish culture. Bridget, who was given spiritual guidance by a learned religious who initiated her into the study of the Scriptures, exercised a very positive influence on her family which, thanks to her presence, became a true “domestic church”. Together with her husband she adopted the Rule of the Franciscan Tertiaries. She generously practiced works of charity for the poor; she also founded a hospital. At his wife’s side Ulf’s character improved and he advanced in the Christian life. On their return from a long pilgrimage to Santiago de Compostela, which they made in 1341 with other members of the family, the couple developed a project of living in continence; but a little while later, in the tranquillity of a monastery to which he had retired, Ulf’s earthly life ended. This first period of Bridget’s life helps us to appreciate what today we could describe as an authentic “conjugal spirituality”: together, Christian spouses can make a journey of holiness sustained by the grace of the sacrament of Marriage. It is often the woman, as happened in the life of St Bridget and Ulf, who with her religious sensitivity, delicacy and gentleness succeeds in persuading her husband to follow a path of faith. I am thinking with gratitude of the many women who, day after day, illuminate their families with their witness of Christian life, in our time too. May the Lord’s Spirit still inspire holiness in Christian spouses today, to show the world the beauty of marriage lived in accordance with the Gospel values: love, tenderness, reciprocal help, fruitfulness in begetting and in raising children, openness and solidarity to the world and participation in the life of the Church.

The second period of Bridget’s life began when she was widowed. She did not consider another marriage in order to deepen her union with the Lord through prayer, penance and charitable works. Therefore Christian widows too may find in this Saint a model to follow. In fact, upon the death of her husband, after distributing her possessions to the poor — although she never became a consecrated religious — Bridget settled near the Cistercian Monastery of Alvastra. Here began the divine revelations that were to accompany her for the rest of her life. Bridget dictated them to her confessors-secretaries, who translated them from Swedish into Latin and gathered them in eight volumes entitled Revelationes (Revelations). A supplement followed these books called, precisely,Revelationes extravagantes (Supplementary revelations).

St Bridget’s Revelations have a very varied content and style. At times the revelations are presented in the form of dialogues between the divine Persons, the Virgin, the Saints and even demons; they are dialogues in which Bridget also takes part. At other times, instead, a specific vision is described; and in yet others what the Virgin Mary reveals to her concerning the life and mysteries of the Son.

The value of St Bridget’s Revelations, sometimes the object of criticism Venerable John Paul II explained in his Letter Spes Aedificandi: “The Church, which recognized Bridget’s holiness without ever pronouncing on her individual revelations, has accepted the overall authenticity of her interior experience” (n. 5). Indeed, reading these Revelations challenges us on many important topics. For example, the description of Christ’s Passion, with very realistic details, frequently recurs. Bridget always had a special devotion to Christ’s Passion, contemplating in it God’s infinite love for human beings. She boldly places these words on the lips of the Lord who speaks to her: “O my friends, I love my sheep so tenderly that were it possible I would die many other times for each one of them that same death I suffered for the redemption of all” (Revelationes, Book I, c. 59). The sorrowful motherhood of Mary, which made her Mediatrix and Mother of Mercy, is also a subject that recurs frequently in the Revelations.

In receiving these charisms, Bridget was aware that she had been given a gift of special love on the Lord’s part: “My Daughter” — we read in the First Book of Revelations — “I have chosen you for myself, love me with all your heart… more than all that exists in the world” (c. 1). Bridget, moreover, knew well and was firmly convinced that every charism is destined to build up the Church. For this very reason many of her revelations were addressed in the form of admonishments, even severe ones, to the believers of her time, including the Religious and Political Authorities, that they might live a consistent Christian life; but she always reprimanded them with an attitude of respect and of full fidelity to the Magisterium of the Church and in particular to the Successor of the Apostle Peter.

In 1349 Bridget left Sweden for good and went on pilgrimage to Rome. She was not only intending to take part in the Jubilee of the Year 1350 but also wished to obtain from the Pope approval for the Rule of a Religious Order that she was intending to found, called after the Holy Saviour and made up of monks and nuns under the authority of the Abbess. This is an element we should not find surprising: in the Middle Ages monastic foundations existed with both male and female branches, but with the practice of the same monastic Rule that provided for the Abbess’ direction. In fact, in the great Christian tradition the woman is accorded special dignity and — always based on the example of Mary, Queen of Apostles — a place of her own in the Church, which, without coinciding with the ordained priesthood is equally important for the spiritual growth of the Community. Furthermore, the collaboration of consecrated men and women, always with respect for their specific vocation, is of great importance in the contemporary world. In Rome, in the company of her daughter Karin, Bridget dedicated herself to a life of intense apostolate and prayer. And from Rome she went on pilgrimage to various Italian Shrines, in particular to Assisi, the homeland of St Francis for whom Bridget had always had great devotion. Finally, in 1371, her deepest desire was crowned: to travel to the Holy Land, to which she went accompanied by her spiritual children, a group that Bridget called “the friends of God”. In those years the Pontiffs lived at Avignon, a long way from Rome: Bridget addressed a heartfelt plea to them to return to the See of Peter, in the Eternal City. She died in 1373, before Pope Gregory XI returned to Rome definitively. She was buried temporarily in the Church of San Lorenzo in Panisperna in Rome but in 1374 her children, Birger and Karin, took her body back to her homeland, to the Monastery of Vadstena, the headquarters of the Religious Order St Bridget had founded. The order immediately experienced a considerable expansion. In 1391 Pope Boniface IX solemnly canonized her. Bridget’s holiness, characterized by the multiplicity of her gifts and the experiences that I have wished to recall in this brief biographical and spiritual outline, makes her an eminent figure in European history. In coming from Scandinavia, St Bridget bears witness to the way Christianity had deeply permeated the life of all the peoples of this Continent. In declaring her Co-Patroness of Europe, Pope John Paul II hoped that St Bridget — who lived in the 14th century when Western Christianity had not yet been wounded by division — may intercede effectively with God to obtain the grace of full Christian unity so deeply longed for.

Let us pray, dear brothers and sisters, for this same intention, which we have very much at heart, and that Europe may always be nourished by its Christian roots, invoking the powerful intercession of St Bridget of Sweden, a faithful disciple of God and Co-Patroness of Europe. Thank you for your attention.