“The Look of Catholics: Portrayals in Popular Culture from the Great Depression to the Cold War” is a fascinating work by Anthony Burke Smith.  In film, radio, print Catholics contributed significantly to the American Imagination during some of the truly toughest years our nation has faced.  It is really interesting how the country turned to the virtuous communal nature of the Catholic identity to lift itself during this time.  From Leo McCarey’s Oscar-winning “Go My Way” to Archbishop Fulton Sheen to Henry Luce (publisher of Life magazine), Anthony covers a vast array of areas in this study.  I loved it, and I bet so will you!

You can find Anthony’s book at Amazon.com 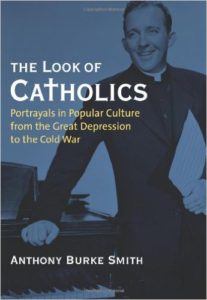 “Smith’s ambitious and exemplary work demonstrates decisively for all time that Catholics were not only integral players in the formation of modern American popular culture but that the role of Catholicism itself in the national popular culture was a major issue in the production of that same culture. . . . A wonderfully exciting book that will be widely hailed as a landmark achievement confirm the author’s stature as the leading scholar of Catholic popular culture, and be consulted by scholars and their students for decades to come.” –James T. Fisher