For more on St. Peter Damian and his teachings

St Peter Damian, who was essentially a man of prayer, meditation and contemplation, was also a fine theologian: his reflection on various doctrinal themes led him to important conclusions for life. Thus, for example, he expresses with clarity and liveliness the Trinitarian doctrine, already using, under the guidance of biblical and patristic texts, the three fundamental terms which were subsequently to become crucial also for the philosophy of the West: processio, relatio and persona (cf. Opusc. XXXVIII: PL CXLV, 633-642; and Opusc. II and III: ibid., 41 ff. and 58 ff). However, because theological analysis of the mystery led him to contemplate the intimate life of God and the dialogue of ineffable love between the three divine Persons, he drew ascetic conclusions from them for community life and even for relations between Latin and Greek Christians, divided on this topic. His meditation on the figure of Christ is significantly reflected in practical life, since the whole of Scripture is centred on him. The “Jews”, St Peter Damian notes, “through the pages of Sacred Scripture, bore Christ on their shoulders as it were” (Sermo XLVI, 15). Therefore Christ, he adds, must be the centre of the monk’s life: “May Christ be heard in our language, may Christ be seen in our life, may he be perceived in our hearts” (Sermo VIII, 5). Intimate union with Christ engages not only monks but all the baptized. Here we find a strong appeal for us too not to let ourselves be totally absorbed by the activities, problems and preoccupations of every day, forgetting that Jesus must truly be the centre of our life. 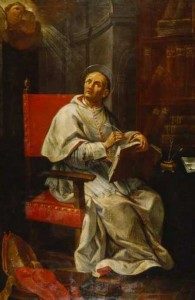