Died: September 30, 420 AD, Bethlehem
For more on St. Jerome and his teachings

From Vatican.va, an excerpt from the teachings of Pope Benedict XVI General Audience 2007

Jerome was born into a Christian family in about 347 A.D. in Stridon. He was given a good education and was even sent to Rome to fine-tune his studies. As a young man he was attracted by the worldly life (cf. Ep 22, 7), but his desire for and interest in the Christian religion prevailed.
He received Baptism in about 366 and opted for the ascetic life. He went to Aquileia and joined a group of fervent Christians that had formed around Bishop Valerian and which he described as almost “a choir of blesseds” (Chron. ad ann. 374). He then left for the East and lived as a hermit in the Desert of Chalcis, south of Aleppo (Ep 14, 10), devoting himself assiduously to study. He perfected his knowledge of Greek, began learning Hebrew (cf. Ep 125, 12), and transcribed codices and Patristic writings (cf. Ep 5, 2). Meditation, solitude and contact with the Word of God helped his Christian sensibility to mature. He bitterly regretted the indiscretions of his youth (cf. Ep. 22, 7) and was keenly aware of the contrast between the pagan mentality and the Christian life: a contrast made famous by the dramatic and lively “vision” – of which he has left us an account – in which it seemed to him that he was being scourged before God because he was “Ciceronian rather than Christian” (cf. Ep. 22, 30).

In 382 he moved to Rome: here, acquainted with his fame as an ascetic and his ability as a scholar, Pope Damasus engaged him as secretary and counsellor; the Pope encouraged him, for pastoral and cultural reasons, to embark on a new Latin translation of the Biblical texts. Several members of the Roman aristocracy, especially noblewomen such as Paula, Marcella, Asella, Lea and others, desirous of committing themselves to the way of Christian perfection and of deepening their knowledge of the Word of God, chose him as their spiritual guide and teacher in the methodical approach to the sacred texts. These noblewomen also learned Greek and Hebrew.

After the death of Pope Damasus, Jerome left Rome in 385 and went on pilgrimage, first to the Holy Land, a silent witness of Christ’s earthly life, and then to Egypt, the favourite country of numerous monks (cf. Contra Rufinum, 3, 22; Ep. 108, 6-14). In 386 he stopped in Bethlehem, where male and female monasteries were built through the generosity of the noblewoman, Paula, as well as a hospice for pilgrims bound for the Holy Land, “remembering Mary and Joseph who had found no room there” (Ep. 108, 14). He stayed in Bethlehem until he died, continuing to do a prodigious amount of work: he commented on the Word of God; he defended the faith, vigorously opposing various heresies; he urged the monks on to perfection; he taught classical and Christian culture to young students; he welcomed with a pastor’s heart pilgrims who were visiting the Holy Land. He died in his cell close to the Grotto of the Nativity on 30 September 419-420. 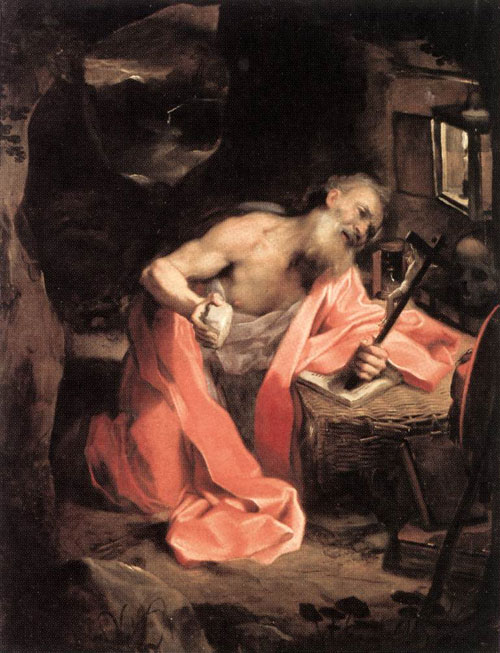 Jerome’s literary studies and vast erudition enabled him to revise and translate many biblical texts: an invaluable undertaking for the Latin Church and for Western culture. On the basis of the original Greek and Hebrew texts, and thanks to the comparison with previous versions, he revised the four Gospels in Latin, then the Psalter and a large part of the Old Testament. Taking into account the original Hebrew and Greek texts of the Septuagint, the classical Greek version of the Old Testament that dates back to pre-Christian times, as well as the earlier Latin versions, Jerome was able, with the assistance later of other collaborators, to produce a better translation: this constitutes the so-called “Vulgate”, the “official” text of the Latin Church which was recognized as such by the Council of Trent and which, after the recent revision, continues to be the “official” Latin text of the Church. It is interesting to point out the criteria which the great biblicist abided by in his work as a translator. He himself reveals them when he says that he respects even the order of the words of the Sacred Scriptures, for in them, he says, “the order of the words is also a mystery” (Ep. 57, 5), that is, a revelation. Furthermore, he reaffirms the need to refer to the original texts: “Should an argument on the New Testament arise between Latins because of interpretations of the manuscripts that fail to agree, let us turn to the original, that is, to the Greek text in which the New Testament was written. “Likewise, with regard to the Old Testament, if there are divergences between the Greek and Latin texts we should have recourse to the original Hebrew text; thus, we shall be able to find in the streams all that flows from the source” (Ep. 106, 2). Jerome also commented on many biblical texts. For him the commentaries had to offer multiple opinions “so that the shrewd reader, after reading the different explanations and hearing many opinions – to be accepted or rejected – may judge which is the most reliable, and, like an expert moneychanger, may reject the false coin” (Contra Rufinum 1, 16).

Jerome refuted with energy and liveliness the heretics who contested the tradition and faith of the Church. He also demonstrated the importance and validity of Christian literature, which had by then become a real culture that deserved to be compared with classical literature: he did so by composing his De Viris Illustribus, a work in which Jerome presents the biographies of more than a hundred Christian authors. Further, he wrote biographies of monks, comparing among other things their spiritual itineraries as well as monastic ideal. In addition, he translated various works by Greek authors. Lastly, in the important Epistulae, a masterpiece of Latin literature, Jerome emerges with the profile of a man of culture, an ascetic and a guide of souls.

What can we learn from St Jerome? It seems to me, this above all; to love the Word of God in Sacred Scripture. St Jerome said: “Ignorance of the Scriptures is ignorance of Christ”. It is therefore important that every Christian live in contact and in personal dialogue with the Word of God given to us in Sacred Scripture. This dialogue with Scripture must always have two dimensions: on the one hand, it must be a truly personal dialogue because God speaks with each one of us through Sacred Scripture and it has a message for each one. We must not read Sacred Scripture as a word of the past but as the Word of God that is also addressed to us, and we must try to understand what it is that the Lord wants to tell us. However, to avoid falling into individualism, we must bear in mind that the Word of God has been given to us precisely in order to build communion and to join forces in the truth on our journey towards God. Thus, although it is always a personal Word, it is also a Word that builds community, that builds the Church. We must therefore read it in communion with the living Church. The privileged place for reading and listening to the Word of God is the liturgy, in which, celebrating the Word and making Christ’s Body present in the Sacrament, we actualize the Word in our lives and make it present among us. We must never forget that the Word of God transcends time. Human opinions come and go. What is very modern today will be very antiquated tomorrow. On the other hand, the Word of God is the Word of eternal life, it bears within it eternity and is valid for ever. By carrying the Word of God within us, we therefore carry within us eternity, eternal life.

I thus conclude with a word St Jerome once addressed to St Paulinus of Nola. In it the great exegete expressed this very reality, that is, in the Word of God we receive eternity, eternal life. St Jerome said: “Seek to learn on earth those truths which will remain ever valid in Heaven” (Ep. 53, 10).