# 2712 CCC
“Contemplative Prayer is the prayer of the child of God, of the forgiven
sinner who agrees to welcome the love by which he is loved and who
wants to respond to it by loving even more. But he knows that the love he
is returning is poured out by the Spirit in his heart, for everything is grace
from God.”

Are you called to forgive? True forgiveness:
• Is a decision
• Is unconditional
• Is showing mercy even when the act was deliberate
• Is taking the other where he/she is
• Is taking the risk of getting hurt again
• Is accepting an apology
• Is choosing to love

Having been forgiven of our sinfulness, we are called to forgive others.

Msgr. John A. Esseff is a Roman Catholic priest in the Diocese of Scranton. He served as a retreat director and confessor to St. Teresa of Calcutta. He continues to offer direction and retreats for the sisters of the missionaries of charity.  He has lived in areas around the world, serving in the Pontifical missions, a Catholic organization established by St. Pope John Paul II to bring the Good News to the world especially to the poor. He is a founding member of the Pope Leo XIII Institute. He continues to serve as a retreat leader and director to bishops, priests and sisters and seminarians, and other religious leaders. 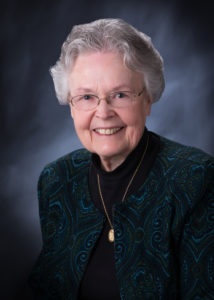 Sister Cor Immaculatum Heffernan, IHM is a member of the Sisters, Servants of the Immaculate Heart of Mary, Scranton, PA. “ She holds several degrees: a Bachelor of Arts in English/Art and a Master of Science degree in Counseling, both from Marywood; a Master of Arts degree in Sculpture from the University of Notre Dame; and a Master of Fine Arts degree in Illustration from Syracuse University. Her multi-faceted life is in itself a masterpiece: she is a teacher, a mentor, and a consultant; she is a sculptor, a harpist, a calligrapher, and a creator of mosaics; she is a counselor, a spiritual director, and above all, she is a servant of God to others”.