The Annunciation of the Blessed Virgin Mary

The Visitation of The Blessed Virgin Mary to Elizabeth

The Nativity of Our Lord and Savior, Jesus Christ

The Presentation at the Temple

The Finding of the Child Jesus in the Temple 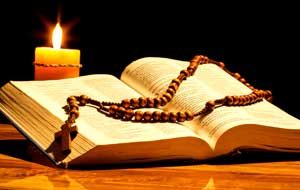 The Baptism of Jesus in the Jordan

The Miracle at the Wedding Feast of Cana

The Proclamation of the Kingdom of God

The Transfiguration of Jesus

The Institution of the Holy Eucharist

The Agony in the Garden

The Scourging at the Pillar

The Crowning with Thorns

The Carrying of the Cross

The Crucifixion of Jesus Christ

The Resurrection of Jesus Christ

The Ascension of Jesus Christ into Heaven

The Descent of the Holy Spirit

The Assumption of the Blessed Virgin Mary

The Coronation of Mary Queen of Heaven

Excerpt from THE JERUSALEM BIBLE, copyright (c) 1966 by Darton, Longman and Todd, Ltd. and Doubleday, a division of Penguin Random House, Inc. Reprinted by Permission.