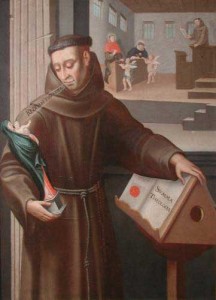 Blessed John Duns Scotus, the teacher of “God’s closeness”.  I love the homily below on this great theologian and lover of the Blessed Mother.

CNA- Pope Benedict XVI  taught about Franciscan priest and teacher  Blessed John Duns Scotus, in one of his Wednesday audiences in July of 2010.  The Holy Father remembered his loyalty and devotion to Christ, the Church and the Successor of St. Peter, as well as his contributions to Christian thought.

During his catechesis, the Pope recalled the life of the medieval Scottish priest and theologian, Blessed John Duns Scotus. He spoke of how the Franciscan, who taught at Oxford, Cambridge, and later in Paris, left France instead of betraying Pope Boniface VIII who was in conflict with King Phillip IV.

This fact, said the Pope, “invites us to remember how many times in the history of the Church, believers have found hostility and promptly even persecution because of their loyalty and devotion to Christ, to the Church and to the Pope.

“We all look with admiration to these Christians, that teach us to protect as a precious inheritance the faith in Christ and the communion with the Successor of Peter and, therefore, with the Universal Church.”

Continuing on the life of the 13th century Franciscan, the Pope said that Blessed Scotus provided three major contributions to Christian thought. The first gift is his “great Christocentric vision” that in the Incarnation “every creature, in and through Christ, is called to be perfected in grace and to glorify God forever.” The second contribution is the theory which led to the dogma “that Our Lady’s preservation from original sin was a privilege granted in view of her Son’s redemptive passion and death.” And finally, Pope Benedict noted his “great attention to the issue of human freedom”as one of his gifts to Christian thought.

Turning to a passage from Pope John Paul II’s address at Blessed Scotus’ 1993 beatification ceremony, Pope Benedict indicated that it “summarize(s) the notable contribution that Duns Scotus made to the history of theology.” That day, the late Pope remembered the medieval priest and theologian as “the cantor of the incarnate Word and defender of the Immaculate Conception of Mary.”

Pope Benedict XVI concluded Wednesday’s audience by saying that the Franciscan “teaches us that the essential thing in our lives is to believe that God is close to us and loves us in Jesus Christ, and to cultivate, then, a profound love for Him and His Church.

“We are the witnesses of that love on this earth,” he said – CNA