God’s temple in heaven was opened,
and the ark of his covenant could be seen in the temple.

A great sign appeared in the sky, a woman clothed with the sun,
with the moon under her feet,
and on her head a crown of twelve stars.
She was with child and wailed aloud in pain as she labored to give birth.
Then another sign appeared in the sky;
it was a huge red dragon, with seven heads and ten horns,
and on its heads were seven diadems.
Its tail swept away a third of the stars in the sky
and hurled them down to the earth.
Then the dragon stood before the woman about to give birth,
to devour her child when she gave birth.
She gave birth to a son, a male child,
destined to rule all the nations with an iron rod.
Her child was caught up to God and his throne.
The woman herself fled into the desert
where she had a place prepared by God.

Then I heard a loud voice in heaven say:
“Now have salvation and power come,
and the Kingdom of our God
and the authority of his Anointed.”

From the Office of Readings: 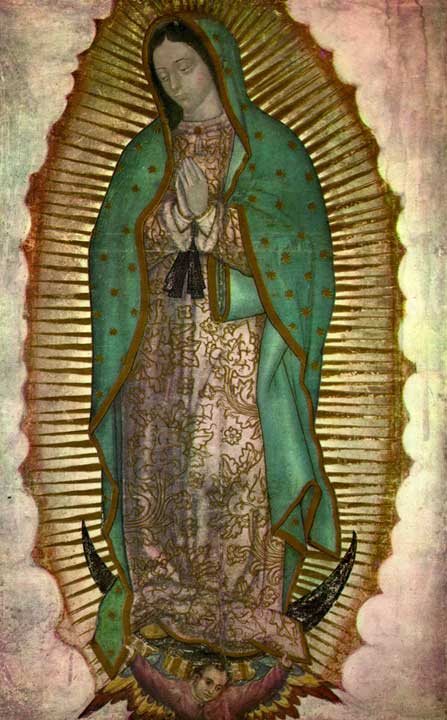 From a report by Don Antonio Valeriano, a Native American author of the sixteenth century
(Nicon Mopohua, 12th ed., 3-9, 21)

The Voice of the Turtledove has been heard in our land

At daybreak one Saturday morning in 1531, on the very first days of the month of December, an Indian named Juan Diego was going from the village where he lived to Tlatelolco in order to take part in divine worship and listen to God’s commandments. When he came near the hill called Tepeyac, dawn had already come, and Juan Diego heard someone calling him from the very top of the hill: “Juanito, Juan Dieguito.”

He went up the hill and caught sight of a lady of unearthly grandeur whose clothing was as radiant as the sun. She said to him in words both gentle and courteous: “Juanito, the humblest of my children, know and understand that I am the ever virgin Mary, Mother of the true God through whom all things live. It is my ardent desire that a church be erected here so that in it I can show and bestow my love, compassion, help, and protection to all who inhabit this land and to those others who love me, that they might call upon and confide in me. Go to the Bishop of Mexico to make known to him what I greatly desire. Go and put all your efforts into this.”

When Juan Diego arrived in the presence of the Bishop, Fray Juan de Zumarraga, a Franciscan, the latter did not seem to believe Juan Diego and answered: “Come another time, and I will listen at leisure.”

Juan Diego returned to the hilltop where the Heavenly Lady was waiting, and he said to her: “My Lady, my maiden, I presented your message to the Bishop, but it seemed that he did not think it was the truth. For this reason I beg you to entrust your message to someone more illustrious who might convey it in order that they may believe it, for I am only an insignificant man.”

She answered him: “Humblest of my sons, I ask that tomorrow you again go to see the Bishop and tell him that I, the ever virgin holy Mary, Mother of God, am the one who personally sent you.”

But on the following day, Sunday, the Bishop again did not believe Juan Diego and told him that some sign was necessary so that he could believe that it was the Heavenly Lady herself who sent him. And then he dismissed Juan Diego.

On Monday Juan Diego did not return. His uncle, Juan Bernardino, became very ill, and at night asked Juan to go to Tlatelolco at daybreak to call a priest to hear his confession.

Juan Diego set out on Tuesday, but he went around the hill and passed on the other side, toward the east, so as to arrive quickly in Mexico City and to avoid being detained by the Heavenly Lady. But she came out to meet him on that side of the hill and said to him: “Listen and understand, my humblest son. There is nothing to frighten and distress you. Do not let your heart be troubled, and let nothing upset you. Is it not I, your Mother, who is here? Are you not under my protection? Are you not, fortunately, in my care? Do not let your uncle’s illness distress you. It is certain that he has already been cured. Go up to the hilltop, my son, where you will find flowers of various kinds. Cut them, and bring them into my presence.”

When Juan Diego reached the peak, he was astonished that so many Castilian roses had burst forth at a time when the frost was severe. He carried the roses in the folds of his tilma (mantle) to the Heavenly Lady. She said to him: “My son, this is the proof and the sign which you will bring to the Bishop so that he will see my will in it. You are my ambassador, very worthy of trust.”

Juan Diego set out on his way, now content and sure of succeeding. On arriving in the Bishop’s presence, he told him: “My lord, I did what you asked. The Heavenly Lady complied with your request and fulfilled it. She sent me to the hilltop to cut some Castilian roses and told me to bring them to you in person. And this I am doing, so that you can see in them the sign you seek in order to carry out her will. Here they are; receive them.”

He immediately opened up his white mantle, and as all the different Castilian roses scattered to the ground, there was drawn on the cloak and suddenly appeared the precious image of the ever virgin Mary, Mother of God, in the same manner as it is today and is kept in her shrine of Tepeyac.

The whole city was stirred and came to see and admire her venerable image and to offer prayers to her; and following the command which the same Heavenly Lady gave to Juan Bernardino when she restored him to health, they called her by the name that she herself had used: “the ever virgin holy Mary of Guadalupe.”