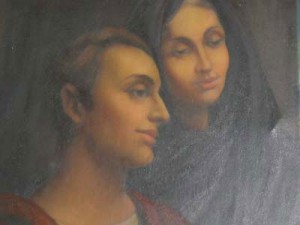 St. Monica (331-387) a “shining light of Christ” example of perserverance in prayer!  We have her as an outstanding model of never giving up…what a gift to us!  Today we can turn to her and see what sticking to it can do, but did you ever think, “Who was her example?”  She didn’t know how the story of her son, St. Augustine would turn out.  She didn’t know that he would be transformed by grace into one of the greatest Doctors of the Church  who ever lived. Monica must have become frustrated, and at times filled with anxiety and maybe even  a degree of despair, but she persevered through it all!  She surely suffered emotionally for her lost son, but she never gave up her hope in God and faith in His promises…the energy of her love for her son fueled her prayer and grace transformed his seeking heart.  It took 30 years, but it happened.

A few months after his conversion, Augustine, Monica and Adeodatus (her other son), set out to return to Africa, but Monica died at Ostia, the ancient port city of Rome, and she was buried there. Some pictures show her so old, but when you think of it, she was only 56 when she died. Augustine was so deeply moved by his mother’s death that he was inspired to write his Confessions, “So be fulfilled what my mother desired of me–more richly in the prayers of so many gained for her through these confessions of mine than by my prayers alone” (Book IX.13.37)

An account of Monica’s early life, her childhood, marriage, her final days and her death, is given in Confessions Book IX, 8-12. He expresses his gratitude for her life:

“I will not speak of her gifts, but of thy gift in her; for she neither made herself nor trained herself. Thou didst create her, and neither her father nor her mother knew what kind of being was to come forth from them. And it was the rod of thy Christ, the discipline of thy only Son, that trained her in thy fear, in the house of one of thy faithful ones who was a sound member of thy Church” (IX.8.7).

Centuries later, Monica’s body was brought to Rome, and eventually her relics were interred in a chapel left of the high altar of the Church of St. Augustine in Rome (see below). 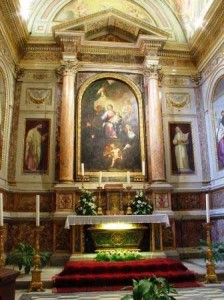 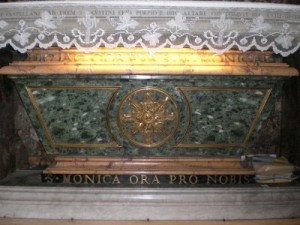 1 thought on “St. Monica, who never gave up hope, pray for us who do – Discerning Hearts”