My good friend Omar Gutierrez describes the ache and the joy in our hearts better than I ever good…Rob, May the choir of angels bring you home…pray for us!

From Regnum Novum – Some readers may have heard of the passing of Deacon Robert Jergovic, a Deacon of the Archdiocese of Omaha. Apparently, Deacon Greg Kandra shared the prayer request for Rob on his blog The Deacon’s Bench and has since then reported that the request has received more responses and activity than any other. The original post received over 400 facebook likes. As he noted, this is a testament to the man that Deacon Rob was.

I only had the pleasure of meeting him and his wife once. My wife and I were graced with sharing a meal with them at a mutual friend’s inviting home. We were taken with Rob and Lisa, with their faith, with their attitude about life, their quiet surety. Who wouldn’t be? After five kids they adopted two girls from China and are in the process of adopting another girl who is deaf. These are “kingdom people” folks. Rob struck me as just such a self-possessed man of faith…not just sincere, but good. Sometimes that is the only word to use. It is “good.” He was “good.”

After his heart attack, the community here in Omaha truly came out in prayerful support of him and his family. One evening, many gathered to pray the rosary for him, and not just one mystery but all four. When the young priest came out to lead us, a priest himself full of God’s grace, he said that we prayed for Our Lady’s intercession and that of John Paul II’s and that we prayed for “a miracle.”

The word and the frankness of the intention jarred me at first. How radical is that, after all… to pray for a miracle. Emotions welled up within me. They were mixed. On one hand I was uncomfortable with praying for something so…well…big. On the other hand I was encouraged by the faith of the priest and of those there. 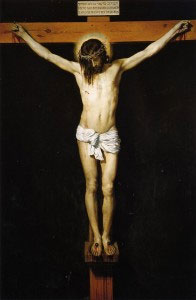 As we began the Joyful Mysteries, it didn’t take me long to note all the wondrous things of salvation history. An angel appears to a virgin, who conceives a child without knowing man. An old woman becomes pregnant and carries a healthy boy to term. Wise men from afar travel miles to see the king who is a baby, and angels appear to the simple shepherds as the world slept. What is not possible with such a God? If it were His will…

“Would,” I then thought to myself as I prayed, “would God be any less amazing if Deacon Rob did not pull through? Would God have failed if this good man were to pass away?” The thought brought me back down to earth a bit. “What does one do when a good man passes?” But then something else occurred to me.

The story that is told in the rosary is the story of our faith, a faith with a series of miracles that result in one great miracle. You see, all along the way of Christ’s life, preaching, suffering, resurrection, and the moments of his ascension and the work of the Spirit, all of it was meant to provide me and you and Deacon Rob with the mind-numbingly glorious miracle of the chance to be with Him… in heaven… forever. I mean forever!

The miracle we prayed for that evening was real. It was a miracle for Rob’s healing, believe me I prayed for that, but the miracle I prayed for was also that he could meet our Savior whom he loved so dearly and hear those words, “Well done, good and faithful servant.” That’s a miracle too, a stupendous miracle. I am confident that Rob will hear those words, if he hasn’t already. He was that good of a man. I am not one for sudden canonizations, but Rob was special.

My heart goes out to his family, to all those who are so close to him and who have lost a dear friend. One person even prayed that they might pass instead of Rob. We’ve lost a good man, a great deacon. I would ask that everyone continue to pray for them.

Though I only shared bread with him once, Deacon Robert Jergovic has made an impact on me and my family.  If nothing else, he has made me better appreciate the diaconate. And I will always remember that when a good man like him passes away a different sort of miracle makes itself present; for Rob died in a state of grace, in love with Jesus, in union with the Church, surrounded by those who loved him and whom he loved; and he is on his way to the fullness of life he’s yearned for. After all, he gets to be with Him, everybody…with Jesus forever and ever… and it’s a wonderful life… and, miracle of miracles, someday we might all get to be with Rob and see for ourselves what it’s like too. May God hold you close Rob, now and forever… goodbye. We love you.