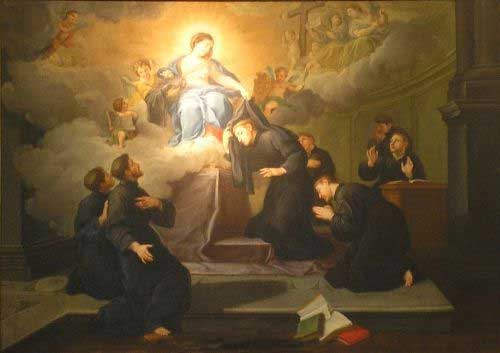 Today is the Church remembers the Seven Founders of the Order of Servites from the 13th Century.

In the mid-13th Century, morals were low and religion seemed nearly meaningless in the political city of Florence. In 1223, seven men from that city decided to form into a small group and go off to a silent place to serve God direct. The Order was founded that day on the Feast of the Assumption as Mary appeared to the seven men. Two of them were widowers and two were still married and brought their families to live together in faith.

They meant to live in solitude, but the group was continually disturbed by visitors. They all left Florence and went to Monte Senario. In 1244, under the direction of St. Peter of Verona, O.P., this group adopted a religious habit similar to the Dominicans and chose to live in accord with the Rule of St. Augustine. They adopted the name of the Servants of Mary.

The men were beatified on December 1, 1717 and canonized in 1887. The original founders were the following: