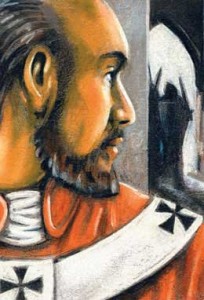 And what would happen next………
. 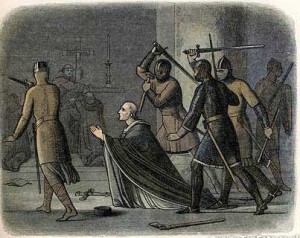 A strong man who wavered for a moment, but then learned one cannot come to terms with evil and so became a strong churchman, a martyr and a saint—that was Thomas Becket, archbishop of Canterbury, murdered in his cathedral on December 29, 1170.

His career had been a stormy one. While archdeacon of Canterbury, he was made chancellor of England at the age of 36 by his friend King Henry II. When Henry felt it advantageous to make his chancellor the archbishop of Canterbury, Thomas gave him fair warning: he might not accept all of Henry’s intrusions into Church affairs. Nevertheless, he was made archbishop (1162), resigned his chancellorship and reformed his whole way of life!

Troubles began. Henry insisted upon usurping Church rights. At one time, supposing some conciliatory action possible, Thomas came close to compromise. He momentarily approved the Constitutions of Clarendon, which would have denied the clergy the right of trial by a Church court and prevented them from making direct appeal to Rome. But Thomas rejected the Constitutions, fled to France for safety and remained in exile for seven years. When he returned to England, he suspected it would mean certain death. Because Thomas refused to remit censures he had placed upon bishops favored by the king, Henry cried out in a rage, “Will no one rid me of this troublesome priest!” Four knights, taking his words as his wish, slew Thomas in the Canterbury cathedral.

Thomas Becket remains a hero-saint down to our own times. From Saint of the Day

For a greater telling of this saint’s life – EWTN Library

Prayer for St. Thomas a Becket

Taken from the Roman Missal.

O God, for the sake of whose Church the glorious Bishop Thomas fell by the sword of ungodly men: grant, we beseech Thee, that all who implore his aid, may obtain the good fruit of his petition. Through our Lord Jesus Christ, Who livest and reignest with Thee in the unity of the Holy Spirit, forever and ever. Amen.

1 thought on “St. Thomas Becket, loyal son of the Church, martyr and saint”