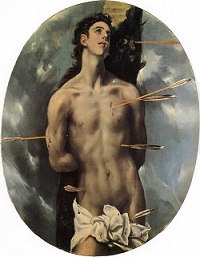 St. Sebastian was a captain of the guard in the Roman military. When the Emperor Diocletian turned on the Christians and began what would be called the “Great Persecution”, Sebastian refused to harm the followers of Christ.

During Diocletian’s persecution of the Christians, Sebastian visited them in prison, bringing supplies and comfort. Reported to have healed the wife of a brother soldier by making the Sign of the Cross over her.  He converted soldiers and a governor to Christianity. Diocletian reproached Sebastian for his supposed betrayal, and he commanded him to be led to the field and there to be bounden to a stake to be shot at. “And the archers shot at him till he was as full of arrows as an urchin,” leaving him there for dead. Miraculously, the arrows did not kill him. The widow of Castulus, Irene of Rome (later St. Irene), went to retrieve his body to bury it, and found he was still alive. She brought him back to her house and nursed him back to health. The other residents of the house doubted he was a Christian. One of those was a girl who was blind. Sebastian asked her “Do you wish to be with God?”, and made the sign of the Cross on her head. “Yes”, she replied, and immediately regained her sight. Sebastian then stood on a step and harangued Diocletian as he passed by; the emperor had him beaten to death and his body thrown in a privy. But in an apparition Sebastian told a Christian widow where they might find his body undefiled and bury it “at the catacombs by the apostles.”

Because Sebastian had been thought to have been killed by the arrows, and yet was not, and then later was killed by the same emperor who had ordered him shot, he is sometimes known as the saint who was martyred twice. – wiki