During the Catecheses of these Wednesdays I am commenting on several important people in the life of the Church from her origins. Today I would like to reflect on one of the most significant figures of the 11th century, St Peter Damian, a monk, a lover of solitude and at the same time a fearless man of the Church, committed personally to the task of reform, initiated by the Popes of the time. He was born in Ravenna in 1007, into a noble family but in straitened circumstances. He was left an orphan and his childhood was not exempt from hardships and suffering, although his sister Roselinda tried to be a mother to him and his elder brother, Damian, adopted him as his son. For this very reason he was to be called Piero di Damiano, Pier Damiani [Peter of Damian, Peter Damian]. He was educated first at Faenza and then at Parma where, already at the age of 25, we find him involved in teaching. As well as a good grounding in the field of law, he acquired a refined expertise in the art of writing the ars scribendi and, thanks to his knowledge of the great Latin classics, became “one of the most accomplished Latinists of his time, one of the greatest writers of medieval Latin” 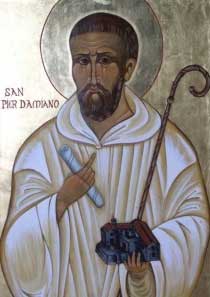 He distinguished himself in the widest range of literary forms: from letters to sermons, from hagiographies to prayers, from poems to epigrams. His sensitivity to beauty led him to poetic contemplation of the world. Peter Damian conceived of the universe as a never-ending “parable” and a sequence of symbols on which to base the interpretation of inner life and divine and supra-natural reality. In this perspective, in about the year 1034, contemplation of the absolute of God impelled him gradually to detach himself from the world and from its transient realties and to withdraw to the Monastery of Fonte Avellana. It had been founded only a few decades earlier but was already celebrated for its austerity. For the monks’ edification he wrote the Life of the Founder, St Romuald of Ravenna, and at the same time strove to deepen their spirituality, expounding on his ideal of eremitic monasticism.

One detail should be immediately emphasized: the Hermitage at Fonte Avellana was dedicated to the Holy Cross and the Cross was the Christian mystery that was to fascinate Peter Damian more than all the others. “Those who do not love the Cross of Christ do not love Christ”, he said (Sermo XVIII, 11, p. 117); and he described himself as “Petrus crucis Christi servorum famulus Peter, servant of the servants of the Cross of Christ” (Ep, 9, 1). Peter Damian addressed the most beautiful prayers to the Cross in which he reveals a vision of this mystery which has cosmic dimensions for it embraces the entire history of salvation: “O Blessed Cross”, he exclaimed, “You are venerated, preached and honoured by the faith of the Patriarchs, the predictions of the Prophets, the senate that judges the Apostles, the victorious army of Martyrs and the throngs of all the Saints” (Sermo XLVII, 14, p. 304). Dear Brothers and Sisters, may the example of St Peter Damian spur us too always to look to the Cross as to the supreme act God’s love for humankind of God, who has given us salvation.

This great monk compiled a Rule for eremitical life in which he heavily stressed the “rigour of the hermit”: in the silence of the cloister the monk is called to spend a life of prayer, by day and by night, with prolonged and strict fasting; he must put into practice generous brotherly charity in ever prompt and willing obedience to the prior. In study and in the daily meditation of Sacred Scripture, Peter Damian discovered the mystical meaning of the word of God, finding in it nourishment for his spiritual life. In this regard he described the hermit’s cell as the “parlour in which God converses with men”. For him, living as a hermit was the peak of Christian existence, “the loftiest of the states of life” because the monk, now free from the bonds of worldly life and of his own self, receives “a dowry from the Holy Spirit and his happy soul is united with its heavenly Spouse” (Ep 18, 17; cf. Ep 28, 43 ff.). This is important for us today too, even though we are not monks: to know how to make silence within us to listen to God’s voice, to seek, as it were, a “parlour” in which God speaks with us: learning the word of God in prayer and in meditation is the path to life.

St Peter Damian, who was essentially a man of prayer, meditation and contemplation, was also a fine theologian: his reflection on various doctrinal themes led him to important conclusions for life.

Dear brothers and sisters, it is a great grace that the Lord should have raised up in the life of the Church a figure as exuberant, rich and complex as St Peter Damian. Moreover, it is rare to find theological works and spirituality as keen and vibrant as those of the Hermitage at Fonte Avellana. St Peter Damian was a monk through and through, with forms of austerity which to us today might even seem excessive. Yet, in that way he made monastic life an eloquent testimony of God’s primacy and an appeal to all to walk towards holiness, free from any compromise with evil. He spent himself, with lucid consistency and great severity, for the reform of the Church of his time. He gave all his spiritual and physical energies to Christ and to the Church, but always remained, as he liked to describe himself, Petrus ultimus monachorum servus, Peter, the lowliest servant of the monks.