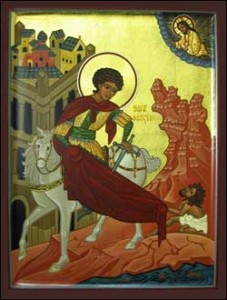 Born in 321 AD, in what is modern day France, St Martin began his life journey as a pagan, converted to Christianity, ascended through church ranks to become Bishop of Tours and ultimately achieved sainthood.

Martin was forced into the army by his father at age 15. But he disliked military life, and led a monk-like existence as an officer, as he wanted to become a Christian, then a new religion in his land.

One severe winter’s day, army officer Martin saw a poor man at the city gates of Amiens, shivering with cold and begging for food. Having no money, Martin took off his warm woolen cloak, cut it in half with his sword and gave half to the beggar. That night Martin dreamt of Christ surrounded by angels, and wearing the half-cloak Martin had given the beggar, and He said, “See, this is the cloak in which Martin, the heathen, has covered me”.

Shortly after Martin was baptized a Christian. Because of that, and because he’d already spent five long years fighting invaders from Germany, he asked for his release from the army. “Up to now, I have served you as a soldier; let me now serve Christ”.

Free to pursue a new life as a disciple of St Hilary of Poitiers, Martin’s path was to remain challenged. He developed a community of disciples, abstaining from worldly comforts and riches. In 371 AD, the city of Tours wanted him as their bishop. A small pocket of opposition said he was not refined enough. But clergy and majority rule prevailed over such criticism, and Martin as consecrated as bishop. At first he ruled a pagan diocese. But with each year, his increasingly far-flung congregation grew through his visits by boat, donkey and on foot.

When he died, aged eighty, on November 9 401 AD, Martin’s body was carried by boat to Tours for burial. It is said the boat moved without oars or sail, accompanied by the sound of heavenly music, and that trees along the river, bare and ready for winter, burst into blossom at his passing.

Prayer to Continue to Fight for God

Lord, if your people still have need of my services, I will not avoid the toil. Your will be done. I have fought the good fight long enough. Yet if you bid me continue to hold the battle line in defense of your camp, I will never beg to be excused from failing strength. I will do the work you entrust to me. While you command, I will fight beneath your banner.    Amen
~~by St Martin of Tours