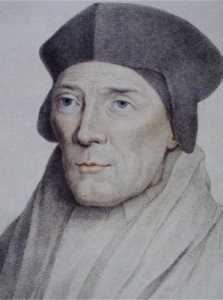 from the Catholic Information Network on St. John Fisher

John Fisher, born at Beverley, Yorkshire, was the son of a prosperous mercer who died in 1477. About 1482 the boy’s mother sent him to Cambridge University where he distinguished himself as a scholar. He was ordained in 1491 on the title of his Fellowship of Michaelhouse (now incorporated in Trinity College). After studying theology for ten years, he took his D.D. in 1501, and was later recognized as one of the leading theologians of Europe.

His university soon discovered his gifts as an administrator; he held in turn the offices of proctor, vice-chancellor and chancellor, and in 1514 he received the unique distinction of being elected chancellor for life. It was in the course of his university duties that, in 1494, he first met the Lady Margaret Beaufort, mother of Henry VII. He became her confessor and advised her on the charitable uses of her great wealth. It was at his suggestion that a preachership was endowed at Cambridge and Readerships in Divinity in both universities. He was largely responsible for her decision to refound and endow Godshouse as Christ’s College, and, after her death in 1509, he carried out her wishes in founding St. John’s College, to which he transferred lands given to him by the Lady Margaret.

He was made bishop of Rochester in 1504, and he ruled that poorest of sees for thirty years; he was a truly pastoral bishop, encouraging his priests by his manner of life and by his interest in their welfare. He was a noted and assiduous preacher, and he did all he could to provide well-instructed priests who could preach to the people.

It was due to his influence that Erasmus was brought to Cambridge as lecturer in Greek. He and Sir Thomas More became close friends of John Fisher, and there is a record of the three being together at Rochester in 1516. Sir Thomas More became High Steward of Cambridge University in 1525. He and John Fisher had been drawn closer together at this period by the call to combat the Lutheran heresy. The bishop wrote his Confutatio (1523) in Latin, a book for theologians by a theologian, which had a wide circulation on 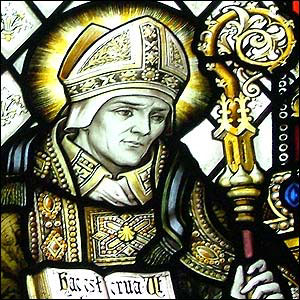 the continent; the layman wrote his Dialogue Concerning Heresies (1528) in English for the common reader. It may be noted that in his sermons and writings against heretics, John Fisher never used the abusive language of contemporary controversy; he relied on reason and persuasion to bring back the prodigals.

The year 1527 was fateful to England, for it was then that Henry VIII took the first steps towards seeking the annulment of his marriage with Catherine of Aragon. She had married his elder brother Arthur in 1501; he died six months later. Catherine always maintained that the marriage had not been consummated. A papal dispensation allowed Henry VIII to marry his brother’s widow in 1509. The lack of a male heir turned his thoughts to the dissolution of his marriage; he argued that the papal dispensation had no validity. Cardinal Wosley was instructed to seek the opinion of John Fisher, whose prestige as a man of holy life and of great learning gave exceptional weight to his views. After studying the problem thoroughly he came to the conclusion that the papal dispensation was valid, and therefore that Henry and Catherine were man and wife in the eyes of the church. From that position he never moved in spite of the pressure brought to bear on him by king and cardinal. He was not content with passive opposition, but in the legatine court set up to try the issue, and from the pulpit, he defended the queen, although he knew that Henry regarded opposition to his will as a form of treason.

An attempt to implicate John Fisher in the fate of the Nun of Kent failed; she had prophesied against the king. A more certain weapon was provided by the Act of Succession of 1534. This declared the king’s marriage to Catherine void, and his subsequent marriage to Anne Boleyn to be lawful; the succession was settled on her children. All had to take an oath accepting the whole Act. When the oath was tendered to 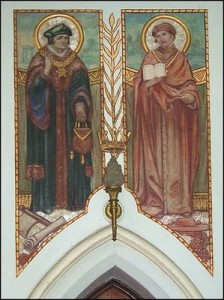 John Fisher he refused to take it; so did Sir Thomas More. Both were prepared to accept the succession as determined by Parliament, but not that part of the Act which implied a denial of the pope’s authority, inasmuch as it declared the papal dispensation invalid.

On April 17th, 1534 Bishop John Fisher and Sir Thomas More were committed to the Tower. They were kept apart.

John Fisher was sixty-five years of age when he was imprisoned; he was suffering from a wasting sickness and was clearly nearing his end. Nothing shows the king’s vindictiveness more than his relentless persecution of this aged man stricken by a fatal illness. On May 20th, 1535, the pope created John Fisher Cardinal-priest of the title of St. Vitalis. This so infuriated the king that he hurried forward the proceedings against the new cardinal.

The Supremacy Act and a new Statute of Treason were passed while John Fisher and Sir Thomas More were in the Tower. Treason was now made to cover anything said against the king’s titles, so that to refuse to recognize him as Supreme Head of the church of England became treason. Neither of the prisoners would give him that recognition, for to do so was to deny the authority of the pope. Each, however, was careful not to put that refusal in words that could be used against them; they begged to be excused. Many attempts were made to get them to say the fateful words. At length Richard Rich, the solicitor-general, visited John Fisher in the Tower and told him that the king ‘for the satisfaction of his own conscience’ wished to know the bishop’s opinion on the Supremacy; Rich assured the prisoner that whatever he said would not be used against him but would remain private to the king. Thereupon John Fisher declared ‘that the King was not, nor could be, by the law of God, Supreme Head of the church of England.’ As a priest he could not refuse to answer a question of conscience, but he had fallen into a trap, and the words he had spoken were used against him at his trial on June 17th, 1535. In spite of his protest at this breach of trust, he was condemned as a traitor.

He was beheaded on Tower Hill on June 22nd, 1535. His naked corpse was left on the scaffold all day until it was hastily buried without ceremony in the nearby churchyard of All Hallows. His head was displayed on London Bridge until July 6th when it was thrown into the Thames to give place to the head of his fellow martyr. Sir Thomas More was buried within the church of St. Peter ad Vincula within the Tower; at the same time, the remains of John Fisher were removed to the same resting place.

John Fisher and Thomas More were beatified in 1886 and canonized in 1935. Their feast is kept jointly.