In my book, every missionary is great.  It takes a great amount of courage and zeal, along with a great deal of faith, hope, and love, to proclaim Christ 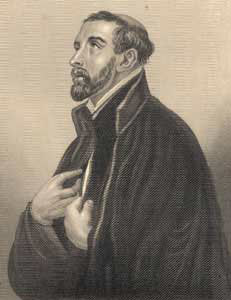 crucified to the world no matter what age you live in, no matter where you travel…whether next door or to a far away land.  One of those who has inspired so many is St. Francis Xavier.  Omar Gutierrez does another fine job bringing this saint’s witness deeper into our hearts….

For the Love of Neighbor…

by Omar F. A. Gutierrez 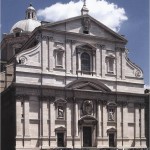 Along a rather busy street in Rome, as one walks along with various-colored motorini passing by in the typical Italian nonchalance, there stands a rather impressive façade of a Church. Churches in Rome are not rarities. Edifices of worship, shrines and even bits of images of the Blessed Virgin dot the city’s corners and crevices throughout. Here, though, with buildings rising tightly upward, is a church with a piazza that stands resolute. The Church is named after Jesus and is referred to by the Italian Gesù.

Inside the Gesù, amidst the distracting busyness of the Baroque interior, one will find the remains of St. Ignatius of Loyola, the punctilious and perceptive Spaniard who founded the order known as the Society of Jesus, the Jesuits. Across the nave, though, is an oddly obvious glass display case gilt with gold and silver. Above this floats the golden form of an angel whose wings and flowing robes give a good deal of attention to the case, for inside the case, in that only-too-Catholic fashion, is… a forearm. 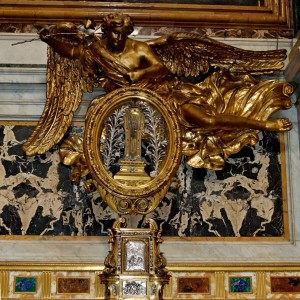 The forearm belonged, or I suppose I should say that it still belongs to another Spaniard who met St. Ignatius at the University of Paris whilst the two of them studied theology. The forearm is on display not in mere virtue of its owner’s friendship with Ignatius. It is on display because its owner, St. Francis Xavier, was one of the most successful missionaries in the history of Christianity. That forearm, black and no doubt by now quite brittle, baptized more souls than perhaps any since the early baptisms of thousands one reads about in the Scriptures.

St. Francis Xavier was born in 1506. When he met St. Ignatius of Loyola, it did not take long for him and five others to join Ignatius in 1534 and be those magnificent seven souls to start the Jesuit order that would transform the world. Nor did it take long, after their order had found some grounding, for St. Francis to be sent by St. Ignatius to go and preach to the world, as Jesus had commanded. St. Francis and his companions, Fr. Paul of Camarino and Francis Mansilhas, sailed from Portugal for India in 1541.

The story of his work in India is dazzling. Certainly Christianity had already been in parts of India, and been there for over a thousand years. However, large swaths of the land were still not evangelized, and anyway the Christians there needed the catechetical and spiritual support of ones like St. Francis, who traveled extensively regardless of danger, time, or geography. What is more astonishing is that the zeal which St. Francis held in that fiery heart of his was not quenched by the successes of India, Ceylon, and the nearby regions. St. Francis heard of a land in which Christianity had never come, Japan, and was compelled to do something about it.

In 1549, he and some companions set out for Japan and landed in Kagoshima. In a year they had 100 converts. Considering this a pittance, Francis pressed onward. At Hirado he was well received and converts came in the droves. His forearm tired at the effort of so many baptisms. Still he pressed on. By the time he left Japan in 1551 at least 2,000 Japanese had been baptized. But there were more lands to be given the Gospel. 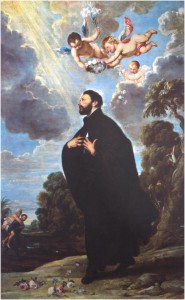 n August of 1552, St. Francis was off again, this time to China. Unfortunately, he fell ill there and died a short time after, on December 3, 1552.

Some of the marks of St. Francis’ story are truly wonderful to relate, not the least of these is the sheer number of baptisms he performed during his eleven years of service in Asia. Modern estimates of his work put him at about 30,000 baptisms. To put that in perspective a bit, that means that St. Francis Xavier would have baptized between 7 and 8 people every day for eleven straight years.

Though he worked to learn the many languages of the lands in which he preached, of course keeping in mind that he would have already known Basque, Spanish, Latin, French, Italian, and Portuguese, he did not have the gift of tongues. The languages he picked up on in India and elsewhere were the result of grueling work on his part. He was not gifted as some are with languages. He had to work hard. This therefore meant that he got creative. He used art a good deal in the attempt to communicate the fundamentals of the faith and as a tool to remember creeds. He also met the people “where they were at,” as the saying goes these days. To the Indians he lived as they did in extreme poverty, eating only rice and water, sleeping on the ground in a hut. In Japan, this would not do. So he dressed richly and presented the local magistrate with fine gifts. This was well received, and he gained instant respect and thus an audience with attentive ears.

Just a couple of last points about St. Francis: first, his travels throughout the world included missionary work not just for the unbaptized but almost especially to already baptized Catholics. Imagine you’ve just sailed the seas for over a year in order to do work in a land far stranger to you than any you’ve ever visited. Upon arriving you discover that the port town is largely Christian. But then you witness what Fr. Butler will describe as the “ambition, avarice, usury, and debauchery” of the Christians there.

The sacraments were neglected, there were not four preachers and no priests outside the walls of Goa; when slaves were atrociously beaten, their masters counted the blows on the beads of their rosaries.

Fr. H. J. Colerdige, S.J. one of the biographers of St. Francis relates the following,

There has probably never yet been a zealous European missionary in any part of the heathen world in which Christians from his own country have been settled, or which they have occasionally visited for purposes of commerce, who has not found among them the worst enemies to his work. No exception can be made as to this lamentable truth in favour of Catholic nations: Spaniards, Frenchmen, Portuguese have as much to answer for in this respect as Dutchmen and Englishmen.

In other words, no Christian missionary has been spared the embarrassment of having to explain to the prospective flock the atrocious behavior of Christians. St. Francis had clearly a lot to do for the Christians already there in Goa. Normally, we…normally I would have thrown in the towel at that point. What is the purpose of preaching the Gospel when the very people who are supposed to be living it are behaving so poorly? Have you not asked yourself thi 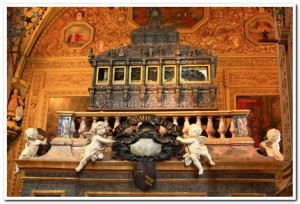 The rest of St. Francis Xavier in the Basilica of Bom Gesu in Goa, India

I dare say that we’ve all experienced something like this in our lives. Have we heard the line that the Church is in more danger of corruption from Catholics within than from non-Catholics without? There is something true in that saying I think. Yet St. Francis pressed on. His dedication to Christ Jesus was so deeply ingrained in him, that he did not need to know that all Catholics would behave properly for him to fulfill his vocation. All he needed to do was to listen to God, to press on living for Him.

Lastly, I don’t want to suggest that St. Francis was callously dismissive of the atrocities he found. Of them he wrote that they became “a permanent bruise on my soul.” He allowed the love for Christ to inform his care for his neighbor, over against those of his own faith. He wrote once, when an Indian was abducted for the slave trade,

Would the Portuguese be pleased if one of the Hindus were to take a Portuguese by force and carry him up country? The Indians must have the same feelings.

This ability of St. Francis Xavier to be driven by his compassion for his 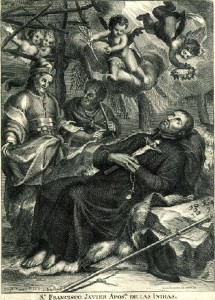 neighbor well enough to see beyond the natural affinities of nation, ethnicity, and faith… this ability to defend the rights of these downtrodden strangers, only brings me to wonder how we can be Catholic, today in the U.S., and not desire for ourselves more largeness of heart for the immigrant. Immigration is too large an issue to enter into here, but given the life of St. Francis presented above, how do we really think he would behave in our current time? Would he deny prenatal care to a woman because her proximity is illegal? Would he demand his neighbor produce proof of eligibility before offering them something as simple as shelter from the storm? No, St. Francis Xavier wouldn’t, not the great missionary, not the grand heart, not the forearm that helped to reconcile strangers in his valley of tears to the God of our homeland in the heavens.

Perhaps, then, take time this day of St. Francis Xavier and consider the immigrant in our midst, the stranger in a strange land. If you find your heart hardened by the vituperative rhetoric that so dominates our political culture, then I ask you only to pray to St. Francis the Spaniard, St. Francis the missionary, St. Francis the lover who allowed that love to bring Jesus to the world. Perhaps we might raise a forearm, glass in hand of course, and toast with a friend the same love that saved a wretch like me.

In that spirit: St. Francis Xavier…pray for us!

Thanks Omar for another great post!!!  visit Regnum Novum for more by Omar