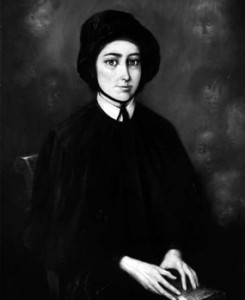 (The following wonderful reflection on the life of St. Elzabeth Ann Seton is from Fr. Mark Kirby

which can be found on his website  Vultus Christi ….I highly encourage you to check it out!!!
Dom Mark Daniel Kirby is Prior of the Diocesan Benedictine Monastery of Our Lady of the Cenacle in Tulsa, Oklahoma.His Excellency Bishop Edward J. Slattery of the Roman Catholic Diocese of Tulsa established the monastery in 2009 with the distinctive mission of Eucharistic Adoration for the sanctification of priests.) 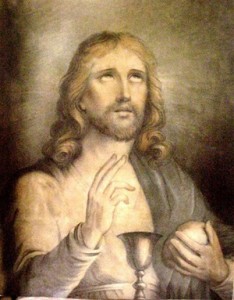 William Magee Seton gave this lithograph of Christ the Redeemer to his beloved wife, Elizabeth Ann Seton, sometime between 1774 and 1803. Its Eucharistic theme prophetically reflected the profound devotion to the Most Holy Eucharist that would characterize her piety as a Catholic.

Below is a photograph of a copy of a variant of the Memorare handwritten by Elizabeth Ann Seton. At the end of text she added the touching plea, “Love me, my Mother.

The conversion of Elizabeth Ann Bayley Seton began in 1803 while she, a twenty-nine year old widow with one of her five children, were the guests of the Filicchi family in Livorno, or Leghorn, Italy. The Catholic Filicchis, Antonio and his wife Amabilia, offered her a gracious hospitality and unfailing emotional support in a time of crisis. 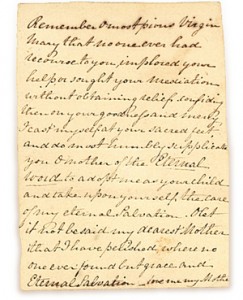 The Motherhood of the Blessed Virgin

In one of Signora Filicchi’s prayer books, Mrs. Seton came upon the text of Saint Bernard’s Memorare; she found in the Virgin Mary the tenderness and the pity of a mother. “That night,” she writes, “I cried myself to sleep in her heart.”

The Filicchi home contained a private chapel where the Blessed Sacrament was reserved. Elizabeth was drawn to the tabernacle. Even before her mind had been instructed in the mysteries of the Catholic faith, her heart recognized the living presence of the Lord in the Most Holy Eucharist. Her American Protestant sensibility was perplexed and, yet, she could not deny her heart’s fascination with the Lamb of God hidden beneath the sacramental veils. 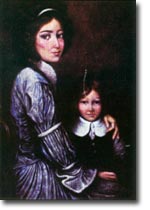 Elizabeth’s long personal memoir, The Italian Journal, recounts the intimate details of her inner struggle and conversion to Catholicism. Elizabeth and her ten year old daughter, Anna Maria, returned to New York on June 3, 1804, accompanied by Antonio Filicchi — a man to whom Elizabeth had become deeply attached. He had become for her a friend and a spiritual counselor.

Reception into the Catholic Church

In spite of the hostility of her family and the sneering disapproval of New York society, Mrs. Seton made her profession of faith as a Catholic in the old Saint Peter’s Church on Barclay Street in Lower Manhattan on March 14, 1805. The Reverend Matthew O’Brien received her into the Catholic Church. She returned home feeling, in her own words, “light of heart and cool of head, the first time these many months.” She asked Our Lord to wrap her heart “deep in His open side,” or “lock it up forever in His little Tabernacle.” Two weeks later, she received her First Holy Communion. The Divine Dweller of the tabernacle came to dwell in her heart.

The rest of Elizabeth Ann Seton’s life is well known: her sufferings from the rampant anti-Catholic prejudice in New York; her move to Baltimore; the beginnings of an American Sisterhood modeled after Saint Vincent de Paul’s Daughters of Charity.

What Dost Thou Seek?

In more than one way, the spiritual journey of Saint Elizabeth Ann Seton resembles that of the two disciples of John the Baptist in the Fourth Gospel. Magnetized by the mystery of the tabernacle, it was as if she heard an inward voice saying, “Elizabeth, behold the Lamb of God.” Jesus, turning His Eucharistic Face to her, said, “What dost thou seek?” “Master,” she answered, “where dwellest thou?” And He replied with an infusion of the love of His Eucharistic Heart, saying, “Come and see.”

Elizabeth obeyed. She came to the one, holy, catholic, and apostolic Church. She submitted to the authority, teaching, and care of the Successor of Peter and of the bishops in communion with him. In the words of the Gospel, “She came, and saw where He abode, and she stayed with Him that day,” and not that day alone, but every day until her death at the age of forty-six on January 4, 1821.

It is time for American Catholics, ever inclined to activism, to recognize that Elizabeth Ann Seton was, more than anything else, a Eucharistic soul. She was converted by the Eucharist. Her first instructions in the Catholic faith emanated from the silence of the tabernacle. As she went forward, following the Lamb of God wheresoever it pleased Him to lead her, Eucharistic adoration marked her spiritual journey more and more until, in the final years of her life, she was often seen in ecstatic adoration of the Real Presence.

The Errors of Americanism

Paradoxically, it is this thoroughly American saint, who, by her devotion to the Mother of God, her 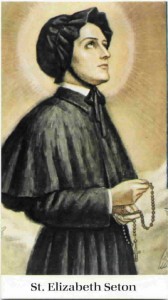 attachment to the Mystery of the Eucharist, and her obedience to the Chair of Peter, offers the antidote to the errors of “Americanism,” condemned by Pope Leo XIII in 1899.
“The underlying principle of these new opinions, declared the Pope, is that, in order to more easily attract those who differ from her, the Church should shape her teachings more in accord with the spirit of the age and relax some of her ancient severity and make some concessions to new opinions. Many think that these concessions should be made not only in regard to ways of living, but even in regard to doctrines which belong to the deposit of the faith. They contend that it would be opportune, in order to gain those who differ from us, to omit certain points of her teaching which are of lesser importance, and to tone down the meaning which the Church has always attached to them. It does not need many words, beloved son, to prove the falsity of these ideas if the nature and origin of the doctrine which the Church proposes are recalled to mind.”

Bound in Fellowship With the Chair of Peter

In the same letter, addressing the problems of Americanism, Pope Leo XIII, offers what is, to my mind, a most fitting commentary on Elizabeth Ann Seton’s conversion to the Church built upon the rock of Peter:
“The true church is one, as by unity of doctrine, so by unity of government, and she is catholic also. Since God has placed the center and foundation of unity in the chair of Blessed Peter, she is rightly called the Roman Church, for “where Peter is, there is the church.” Wherefore, if anybody wishes to be considered a real Catholic, he ought to be able to say from his heart the selfsame words which Jerome addressed to Pope Damasus: “I, acknowledging no other leader than Christ, am bound in fellowship with Your Holiness; that is, with the chair of Peter. I know that the church was built upon him as its rock, and that whosoever gathereth not with you, scattereth.” –Vultus Christi