St. Cecilia, her story is an extraordinary one of faithfulness, commitment, and love. Some would have you believe it was all “legend,” but the discovery of her incorrupt body in 1599 would bear otherwise. It seems to me the Lord is encouraging us to believe the witness of this courageous virgin martyr.

In St. Cecilia’s in Rome,  I had one of the most peaceful and prayerful experiences while on pilgrimage to the “City of the Saints.”

It is said that Saint Cecilia was born of a patrician family in Rome and raised as a Christian. She wore a coarse horsehair garment beneath her clothes of rank, fasted, and vowed herself to God. 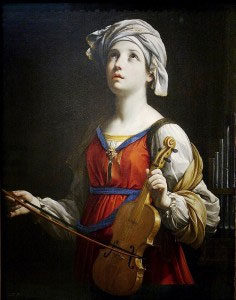 Against her will, she was married by her father to a young, pagan patrician named Valerian. While everyone sang and danced at their wedding, Cecilia sat apart, saying only the Psalms. Valerian turned out to be a man of great understanding. On their wedding night, she told Valerian, “I have an angel of God watching over me. If you touch me in the way of marriage, he will be angry, and you will suffer. But if you respect my maidenhood, he will love you as he loves me.”

Valerian replied, “Show me this angel.” She told him that if he believed in the living and one true God and was baptized, he would see the angel. Thus, she persuaded Valerian to respect her vow of virginity.

He was impressed and attracted by his wife’s Christian graces, and so Valerian was baptized by Pope Saint Urban (which would be c. 222-230). When he returned to Cecilia, he found her standing by the side of an angel as she promised. The angel told him: “I have a crown of flowers for each of you. They have been sent from paradise as a sign of the life you are both to lead. If you are faithful to God, He will reward you with the everlasting perfumes of heaven.”

The angel then crowned Cecilia with roses and Valerian with a wreath of lilies. The delightful fragrance of the flowers filled the whole house. At this point, Valerian’s brother, Tiburtius, appeared. He, too, was offered salvation if he would renounce false gods. Cecilia converted him, and he was baptized. 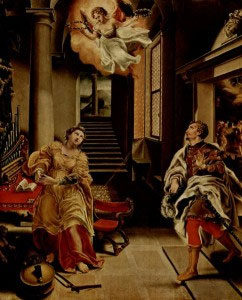 From that time the two young men dedicated themselves to good works. Because of their ardor in burying the bodies of martyred Christians, they were arrested. The prefect Almachius told them that if they would sacrifice to the gods, they could go free. They refused, and Valerian rejoiced when he was handed over to be scourged.

The prefect wanted to give them another chance, but his assessor warned him that they would simply use the interim to give away their possessions so that they couldn’t be confiscated. They were beheaded in Pagus Triopius, four miles from Rome. With them was an officer named Maximus, who had declared himself a Christian after witnessing their fortitude.

Cecilia buried the three and then decided to turn her home into a place of worship. Her religion was discovered, and she was asked to refute her faith. She converted those who were sent to convince her to sacrifice to the gods. When Pope Urban visited her at home, he baptized over 400 people.

In court, Almachius debated with her for some time. She was sentenced to be suffocated to death in the bathroom of her house. The furnace was fed seven times its normal amount of fuel, but the steam and heat failed to stifle her. A soldier sent to behead her struck at her neck three times, and she was left dying on the floor. She 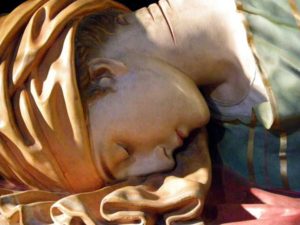 lingered for three days, during which time the Christians thronged to her side, and she formally made over her house to Urban and committed her household to his care.

She was buried next to the papal crypt in the catacombs of Saint Callixtus. In 817, Pope Saint Paschal I discovered her grave, which had been concealed 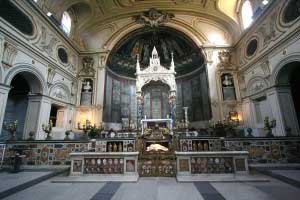 from the Lombard invader Aistulf in 756, and translated her body to beneath the main altar of what was later called the titulus Sanctae Caeciliae, which translates as “the church founded by a lady named Cecilia.” In 1599, during the renovation of the church, Cardinal Sfondrati opened her tomb and found her holy remains incorrupt. Even the green and gold of her rich robe had not been injured by time. Thousands had the privilege of seeing her in her coffin, and many have been blessed by miracles. The body disintegrated quickly after meeting with the air. 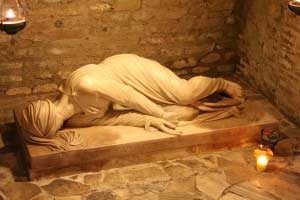 sword. A replica of this statue occupies the original resting place of the saint in the Catacomb of Callixtus. Other artists were allowed to paint pictures of her after her tomb was opened.

Until the middle ages, Pope Saint Gregory had been the patron of music and musicians, but when the Roman Academy of Music was established in 1584, it was put under the protection of Saint Cecilia; thus, her patronage of music originated. Dryden wrote a “Song for Saint Cecilia Day” and Pope an “Ode for Music on Saint Cecilia Day.”

Valerian, Tiburtius, and Maximus are historical characters; they were Roman martyrs, buried in the cemetery of Praetextatus, but nothing else is known of them. Her story was the basis for the Second Nun’s Tale in Chaucer’s Canterbury Tales.

St. Cecilia is regarded as the patroness of music [because of the story that she heard heavenly music in her heart when she was married], and is represented in art with an organ or organ-pipes in her hand.– From The Lives of the Saints by the Rev. S. Baring-Gould, M.A., published in 1914 in Edinburgh.

Dear Saint Cecilia, one thing we know for certain about you is that you became a heroic martyr in fidelity to your divine Bridegroom.

We do not know that you were a musician but we are told that you heard Angels sing.

Inspire musicians to gladden the hearts of people by filling the air with God’s gift of music and reminding them of the divine Musician who created all beauty.