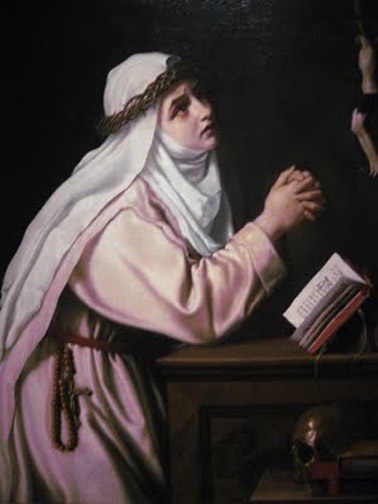 When the fame of her holiness spread, she became the protagonist of an intense activity of spiritual 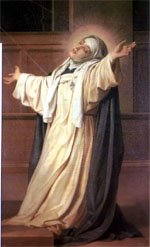 guidance for people from every walk of life: nobles and politicians, artists and ordinary people, consecrated men and women and religious, including Pope Gregory xi who was living at Avignon in that period and whom she energetically and effectively urged to return to Rome.

The teaching of Catherine, who learned to read with difficulty and learned to write in adulthood, is contained in the Dialogue of Divine Providence or Libro della Divina Dottrina, a masterpiece of spiritual literature, in her Epistolario and in the collection of her Prayers.

Her teaching is endowed with such excellence that in 1970 the Servant of God Paul VI declared her a Doctor of the Church, a title that was added to those of Co-Patroness of the City of Rome — at the wish of Bl. Pius ix — and of Patroness of Italy — in accordance with the decision of Venerable Pius XII. 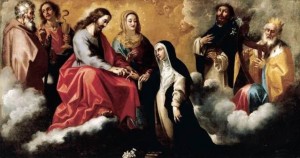 In a vision that was ever present in Catherine’s heart and mind Our Lady presented her to Jesus who gave her a splendid ring, saying to her: “I, your Creator and Saviour, espouse you in the faith, that you will keep ever pure until you celebrate your eternal nuptials with me in Heaven” (Bl. Raimondo da Capua, S. Caterina da Siena, Legenda maior, n. 115, Siena 1998). This ring was visible to her alone. In this extraordinary episode we see the vital centre of Catherine’s religious sense, and of all authentic spirituality: Christocentrism. For her Christ was like the spouse with whom a relationship of intimacy, communion and faithfulness exists; he was the best beloved whom she loved above any other good. This profound union with the Lord is illustrated by another episode in the life of this outstanding mystic: the exchange of hearts. According to Raymond of Capua who passed on the confidences Catherine received, the Lord Jesus appeared to her “holding in his holy hands a human heart, bright red and shining”. He opened her side and put the heart within her saying: “Dearest daughter, as I took your heart away from you the other day, now, you see, I am giving you mine, so that you can go on living with it for ever” (ibid.). Catherine truly lived St. Paul’s words, “It is no longer I who live, but Christ who lives in me” (Gal 2:20).

Like the Sienese Saint, every believer feels the need to be conformed with the sentiments of the heart of Christ to love God and his neighbour as Christ himself loves. And we can all let our hearts be transformed and learn to love like Christ in a familiarity with him that is nourished by prayer, by meditation on the Word of God and by the sacraments, above all by receiving Holy Communion frequently and with devotion. Catherine also belongs to the throng of Saints devoted to the Eucharist with which I concluded my Apostolic Exhortation Sacramentum Caritatis (cf. n. 94). Dear brothers and sisters, the Eucharist is an extraordinary gift of love that God continually renews to nourish our journey of faith, to strengthen our hope and to inflame our charity, to make us more and more like him.

A true and authentic spiritual family was built up around such a strong and genuine personality; people fascinated by the moral authority of this young woman with a most exalted lifestyle were at times also impressed by the mystical phenomena they witnessed, such as her frequent ecstasies. Many put themselves at Catherine’s service and above all considered it a privilege to receive spiritual guidance from her. They called her “mother” because, as her spiritual children, they drew spiritual nourishment from her. Today too the 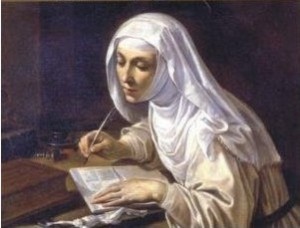 Church receives great benefit from the exercise of spiritual motherhood by so many women, lay and consecrated, who nourish souls with thoughts of God, who strengthen the people’s faith and direct Christian life towards ever loftier peaks. “Son, I say to you and call you”, Catherine wrote to one of her spiritual sons, Giovanni Sabbatini, a Carthusian, “inasmuch as I give birth to you in continuous prayers and desire in the presence of God, just as a mother gives birth to a son” (Epistolario, Lettera n. 141: To Fr Giovanni de’ Sabbatini). She would usually address the Dominican Fr Bartolomeo de Dominici with these words: “Most beloved and very dear brother and son in Christ sweet Jesus”.

Another trait of Catherine’s spirituality is linked to the gift of tears. They express an exquisite, profound sensitivity, a capacity for being moved and for tenderness. Many Saints have had the gift of tears, renewing the emotion of Jesus himself who did not hold back or hide his tears at the tomb of his friend Lazarus and at the grief of Mary and Martha or at the sight of Jerusalem during his last days on this earth. According to Catherine, the tears of Saints are mingled with the blood of Christ, of which she spoke in vibrant tones and with symbolic images that were very effective: “Remember Christ crucified, God and man….. Make your aim the Crucified Christ, hide in the wounds of the Crucified Christ and drown in the blood of the Crucified Christ” (Epistolario, Lettera n. 21: Ad uno il cui nome si tace [to one who remains anonymous]). Here we can understand why, despite her awareness of the human shortcomings of priests, Catherine always felt very great reverence for them: through the sacraments and the word they dispense the saving power of Christ’s Blood. The Sienese Saint always invited the sacred ministers, including the Pope whom she called “sweet Christ on earth”, to be faithful to their responsibilities, motivated always and only by her profound and constant love of the Church. She said 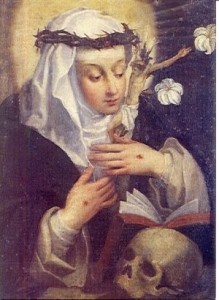 before she died: “in leaving my body, truly I have consumed and given my life in the Church and for the Holy Church, which is for me a most unique grace” (Raimondo da Capua, S. Caterina da Siena, Legenda maior, n. 363). Hence we learn from St Catherine the most sublime science: to know and love Jesus Christ and his Church. In the Dialogue of Divine Providence, she describes Christ, with an unusual image, as a bridge flung between Heaven and earth. This bridge consists of three great stairways constituted by the feet, the side and the mouth of Jesus. Rising by these stairways the soul passes through the three stages of every path to sanctification: detachment from sin, the practice of the virtues and of love, sweet and loving union with God.

Dear brothers and sisters, let us learn from St Catherine to love Christ and the Church with courage, intensely and sincerely. Therefore let us make our own St Catherine’s words that we read in the Dialogue of Divine Providence at the end of the chapter that speaks of Christ as a bridge: “out of mercy you have washed us in his Blood, out of mercy you have wished to converse with creatures. O crazed with love! It did not suffice for you to take flesh, but you also wished to die!… O mercy! My heart drowns in thinking of you: for no matter where I turn to think, I find only mercy” (chapter 30, pp. 79-80). Thank you.

0 thoughts on “St. Catherine of Siena, our spiritual “mamma”, teach us to love Christ and the Church with courage”