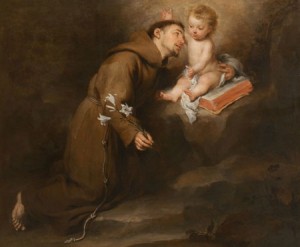 Saint Anthony of Padua from vatican.va

Two weeks ago I presented St Francis of Assisi. This morning I would like to speak of another saint who belonged to the first generation of the Friars Minor: Anthony of Padua, or of Lisbon, as he is also called with reference to his native town. He is one of the most popular Saints in the whole Catholic Church, venerated not only in Padua, where a splendid Basilica has been built that contains his mortal remains, but also throughout the world. Dear to the faithful are the images and statues that portray him with the lily a symbol of his purity or with the Child Jesus in his arms, in memory of a miraculous apparition mentioned in several literary sources.

With his outstanding gifts of intelligence, balance, apostolic zeal and, primarily, mystic fervour, Anthony contributed significantly to the development of Franciscan spirituality.

He was born into a noble family in Lisbon in about 1195 and was baptized with the name of Fernando. He entered the Canons who followed the monastic Rule of St Augustine, first at St Vincent’s Monastery in Lisbon and later at that of the Holy Cross in Coimbra, a renowned cultural centre in Portugal. He dedicated himself with interest and solicitude to the study of the Bible and of the Church Fathers, acquiring the theological knowledge that was to bear fruit in his teaching and preaching activities. The event that represented a decisive turning point on his life happened in Coimbra. It was there, in 1220, that the relics were exposed of the first five Franciscan missionaries who had gone to 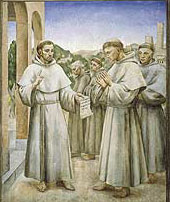 Morocco, where they had met with martyrdom. Their story inspired in young Fernando the desire to imitate them and to advance on the path of Christian perfection. Thus he asked to leave the Augustinian Canons to become a Friar Minor. His request was granted and, having taken the name of Anthony, he too set out for Morocco, but divine Providence disposed otherwise. After an illness he was obliged to return to Italy and, in 1221, participated in the famous “Chapter of the Mats” in Assisi, where he also met St Francis. He then lived for a period in complete concealment in a convent at Forlì in northern Italy, where the Lord called him to another mission. Invited, in somewhat casual circumstances, to preach on the occasion of a priestly ordination, he showed himself to be endowed with such knowledge and eloquence that the Superiors assigned him to preaching. Thus he embarked on apostolic work in Italy and France that was so intense and effective that it induced many people who had left the Church to retrace their footsteps. Anthony was also one of the first if not the first theology teachers of the Friars Minor. He began his teaching in Bologna with the blessing of St Francis who, recognizing Anthony’s virtues, sent him a short letter that began with these words: “I would like you to teach the brethren theology”. Anthony laid the foundations of Franciscan theology which, cultivated by other outstanding thinkers, was to reach its apex with St Bonaventure of Bagnoregio and Bl. Duns Scotus.

Having become Provincial Superior of the Friars Minor in northern Italy, he continued his ministry of 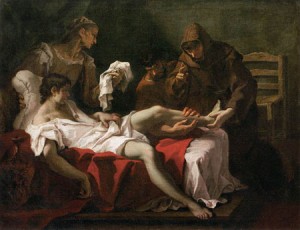 preaching, alternating it with his office of governance. When his term as Provincial came to an end, he withdrew to a place near Padua where he had stayed on various other occasions. Barely a year later, he died at the city gates on 13 June 1231. Padua, which had welcomed him with affection and veneration in his lifetime, has always accorded him honour and devotion. Pope Gregory IX himself, having heard him preach, described him as the “Ark of the Testament” and subsequent to miracles brought about through his intercession canonized him in 1232, only a year after his death.

In the last period of his life, Anthony put in writing two cycles of “Sermons”, entitled respectively “Sunday Sermons” and “Sermons on the Saints” destined for the Franciscan Order’s preachers and teachers of theological studies. In these Sermons he commented on the texts of Scripture presented by the Liturgy, using the patristic and medieval interpretation of the four senses: the literal or historical, the allegorical or Christological, the tropological or moral, and the anagogical, which orients a person to eternal life. Today it has been rediscovered that these senses are dimensions of the one meaning of Sacred Scripture and that it is right to interpret Sacred Scripture by seeking the four dimensions of its words. St Anthony’s sermons are theological and homiletical texts that echo the live preaching in which Anthony proposes a true and proper itinerary of Christian life. The richness of spiritual teaching contained in the “Sermons” was so great that in 1946 Venerable Pope Pius XII proclaimed Anthony a Doctor of the Church, attributing to him the title “Doctor Evangelicus”, since the freshness and beauty of the Gospel emerge from these writings. We can still read them today with great spiritual profit.

In these Sermons St Anthony speaks of prayer as of a loving relationship that impels man to speak gently with the Lord, creating an ineffable joy that sweetly enfolds the soul in prayer. Anthony reminds us that prayer requires an atmosphere of silence, which does not mean distance from external noise but rather is an interior experience that aims to remove the distractions caused by a soul’s anxieties, thereby creating silence in the soul itself. According to this prominent Franciscan Doctor’s teaching, prayer is structured in four indispensable attitudes which in Anthony’s Latin are defined as obsecratio, oratio, postulatio, gratiarum actio. We might translate them in the following manner. The first step in prayer is confidently opening one’s heart to God; this is not merely accepting a word but opening one’s heart to God’s presence. Next, is speaking with him affectionately, seeing him present with oneself; then a very natural thing presenting our needs to him; and lastly, praising and thanking him. 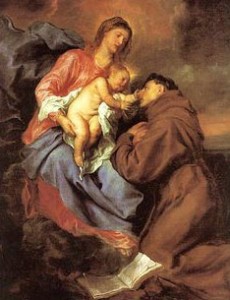 In St Anthony’s teaching on prayer we perceive one of the specific traits of the Franciscan theology that he founded: namely the role assigned to divine love which enters into the sphere of the affections, of the will and of the heart, and which is also the source from which flows a spiritual knowledge that surpasses all other knowledge. In fact, it is in loving that we come to know.

It is only the prayerful soul that can progress in spiritual life: this is the privileged object of St Anthony’s preaching. He is thoroughly familiar with the shortcomings of human nature, with our tendency to lapse into sin, which is why he continuously urges us to fight the inclination to avidity, pride and impurity; instead of practising the virtues of poverty and generosity, of humility and obedience, of chastity and of purity. At the beginning of the 13th century, in the context of the rebirth of the city and the flourishing of trade, the number of people who were insensitive to the needs of the poor increased. This is why on various occasions Anthony invites the faithful to think of the true riches, those of the heart, which make people good and merciful and permit them to lay up treasure in Heaven. “O rich people”, he urged them, “befriend… the poor, welcome them into your homes: it will subsequently be they who receive you in the eternal tabernacles in which is the beauty of peace, the confidence of security and the opulent tranquillity of eternal satiety” (ibid., p. 29).

Is not this, dear friends, perhaps a very important teaching today too, when the financial crisis and 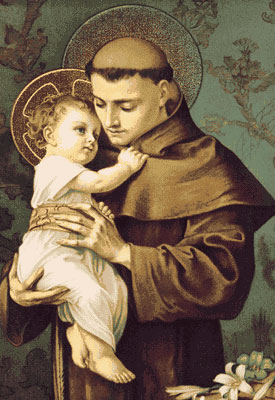 serious economic inequalities impoverish many people and create conditions of poverty? In my Encyclical Caritas in Veritate I recall: “The economy needs ethics in order to function correctly not any ethics whatsoever, but an ethics which is people-centred” (n. 45).

Anthony, in the school of Francis, always put Christ at the centre of his life and thinking, of his action and of his preaching. This is another characteristic feature of Franciscan theology: Christocentrism. Franciscan theology willingly contemplates and invites others to contemplate the mysteries of the Lord’s humanity, the man Jesus, and in a special way the mystery of the Nativity: God who made himself a Child and gave himself into our hands, a mystery that gives rise to sentiments of love and gratitude for divine goodness.

Not only the Nativity, a central point of Christ’s love for humanity, but also the vision of the Crucified One inspired in Anthony thoughts of gratitude to God and esteem for the dignity of the human person, so that all believers and non-believers might find in the Crucified One and in his image a life-enriching meaning. St Anthony writes: “Christ who is your life is hanging before you, so that you may look at the Cross as in a mirror. There you will be able to know how mortal were your wounds, that no medicine other than the Blood of the Son of God could heal. If you look closely, you will be able to realize how great your human dignity and your value are…. Nowhere other than looking at himself in the mirror of the Cross can man better understand how much he is worth” (Sermones Dominicales et Festivi III, pp. 213-214).

In meditating on these words we are better able to understand the importance of the image of the Crucified One for our culture, for our humanity that is born from the Christian faith. Precisely by looking at the Crucified One we see, as St Anthony says, how great are the dignity and worth of the human being. At no other point can we understand how much the human person is worth, precisely because God makes us so important, considers us so important that, in his opinion, we are worthy of his suffering; thus all human dignity appears in the mirror of the Crucified One and our gazing upon him is ever a source of acknowledgement of human dignity.

Dear friends, may Anthony of Padua, so widely venerated by the faithful, intercede for the whole Church and especially for those who are dedicated to preaching; let us pray the Lord that he will help us learn a little of this art from St Anthony. May preachers, drawing inspiration from his example, be effective in their communication by taking pains to combine solid and sound doctrine with sincere and fervent devotion. In this Year for Priests, let us pray that priests and deacons will carry out with concern this ministry of the proclamation of the word of God, making it timely for the faithful, especially through liturgical homilies. May they effectively present the eternal beauty of Christ, just as Anthony recommended: “If you preach Jesus, he will melt hardened hearts; if you invoke him he will soften harsh temptations; if you think of him he will enlighten your mind; if you read of him he will satifsfy your intellect” (Sermones Dominicales et Festivi III, p. 59).

1 thought on “St. Anthony of Padua: only the prayerful soul can progress in spiritual life”