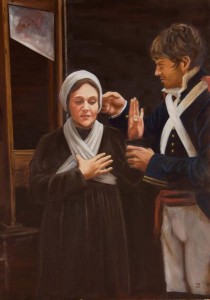 From the Daughter of Charity of St. Vincent de Paul website:

“The lives of the saints are not limited to their earthly biographies but also include their being and working in God after death. In the saints one thing becomes clear: those who draw near to God do not withdraw from men, but rather become truly close to them.”(Deus Caritas est 42).

In February 2011 we published a short article on Sister Marguerite Rutan, Daughter of Charity and martyr (see www.filles-de-la-charite.org/en/news). As her beatification approaches we invite you to learn more about her life. Who is this new example of Vincentian holiness?

A presentation of her life:

Marguerite Rutan was born on 23 April 1736 in Metz in Lorraine and was baptized the same day. Marguerite was the 8th of 15 children. Marie Forat, her mother, was very Christian and her father, Charles Gaspard Rutan was an honest and courageous workman. With them she learned to live her life as a gift from God.

Her father introduced her to mathematics and linear design. Soon she was able to keep the accounts of his business. She helped with all her family until she was 21 years old.

She had the profound conviction she was being called by Jesus. With Him she looked for a way to give herself to the service of those who were poor.

In 1756, Marguerite Rutan entered the Company of the Daughters of Charity to be near those who were suffering, marginalized or excluded. She wanted to serve them. Following Christ she encouraged charity in those around her. For over 20 years she placed everything she received from God and others at the service of the poorest of the poor, no matter where she was sent by her superiors. 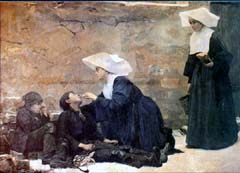 In 1779 she was sent to serve in the Hospital of Dax. Sr. Marguerite and her Sisters worked for 10 years relating with the townspeople. The Sisters were admired and respected.

In 1789 the troubling period of the Revolution began. It profoundly changed the country and personally touched Sr. Marguerite with suffering and death (April 9, 1794). Her faithfulness to Christ and the Church lead her to martyrdom. The life of Sr. Marguerite was anchored in the person of Christ and his Word. Each day she profoundly encountered the love of Christ which drew her to serve as He served.

Following Christ, servant of her brothers and sisters, kneeling to wash their feet, Sr. Marguerite gave her life to serve the poor and the sick and building brotherhood with all.

Following Christ, servant of the will of the Father, Sr. Marguerite based her life on the Gospel, desiring only one thing: to do the will of God.

Following Christ, servant of the suffering, despised, persecuted, Sr. Marguerite abandoned herself totoally to God. During the revolutionary turmoil, she showed the extremity of her love.

Marguerite Rutan: A little history of her life