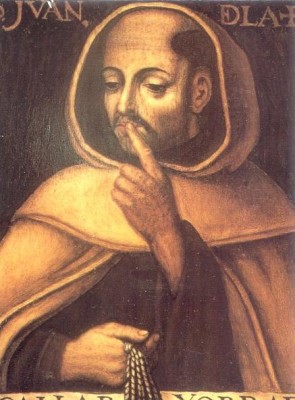 For the complete pdf text of the “The Ascent of Mt. Carmel” by St. John of the Cross

For other audio chapters of “The Ascent of Mt. Carmel” visit here

Wherein is treated the proximate means of ascending to union with God, which is faith; and wherein, therefore, is described the second part of this night, which, as we said, belongs to the spirit, and is contained in the second stanza, which is as follows.

In darkness, and in safety,
By the secret ladder, disguised,
happy lot !
In darkness and concealment,
fily house being now at rest.

Which treats of the first kind of words that the recollected spirit sometimes forms within itself. Describes the cause of these and the profit and the harm which there may be in them.

Which treats of the interior words that come to the spirit formally by supernatural means. Warns the reader of the harm which they may do and of the caution that is necessary in order that the soul may not be deceived by them.

Which treats of the substantial words that come interiorly to the spirit. Describes the difference between them and formal words, and the profit which they bring and the resignation and respect which the soul must observe with regard to them. ***

Which treats of the apprehensions received by the understanding from interior feelings which come supernaturally to the soul. Describes their cause, and the manner wherein the soul must conduct itself so that they may not obstruct its road to union with God.

*** (footnote from the E. Allison Peers translation)
This chapter is notable for the hardly surpassable clarity and precisions with which the Saint  defines substantial locutions. Some critics, however, have found fault with him for saying that the soul should not fear these locutions, but accept them humbly and passively, since they depend wholly on God. The reply is that, when God favours the soul with these locutions, its own restless effort can only impede His work in it, as has already been said. The soul is truly co-operating with God by preparing itself with resignation and humble affection to receive His favours: it should not, as some critics have asserted, remain completely inactive. As to the fear of being deceived by these locutions, both St. Thomas and all the principal commentators are in conformity with the Saint’s teaching. St. Teresa, too, took the same attitude as St. John of the Cross. Cf. her Life, Chap. xxv,and Interior Castle, VI, iii.