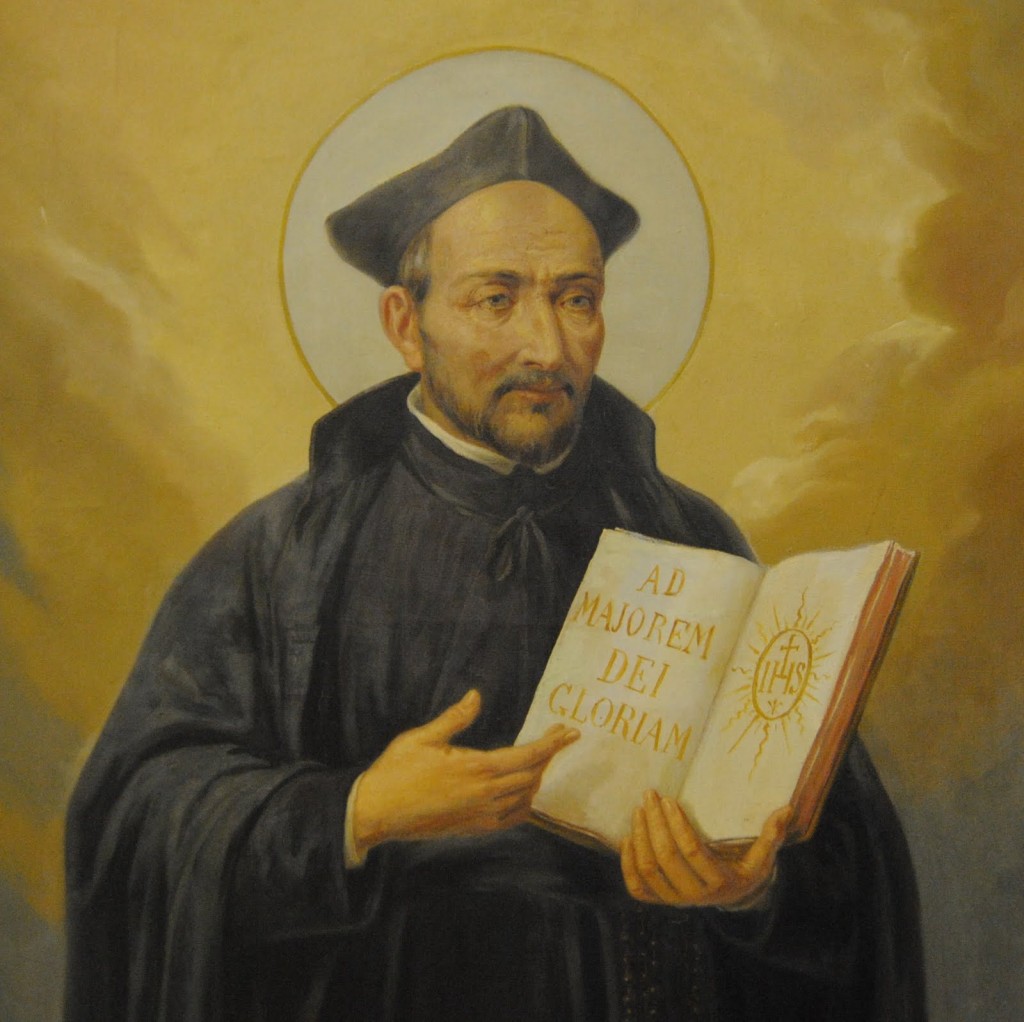 The Discernment of Spirits:

FOR PERCEIVING AND KNOWING IN SOME MANNER

THE DIFFERENT MOVEMENTS WHICH

ARE CAUSED IN THE SOUL

THE GOOD, TO RECEIVE THEM, AND

THE BAD TO REJECT THEM.

AND THEY ARE MORE

PROPER FOR THE FIRST WEEK.

The first Rule: In the persons who go from mortal sin to mortal sin, the enemy is commonly used to propose to them apparent pleasures, making them imagine sensual delights and pleasures in order to hold them more and make them grow in their vices and sins. In these persons the good spirit uses the opposite method, pricking them and biting their consciences through the process of reason.

The second: In the persons who are going on intensely cleansing their sins and rising from good to better in the service of God our Lord, it is the method contrary to that in the first Rule, for then it is the way of the evil spirit to bite, sadden and put obstacles, disquieting with false reasons, that one may not go on; and it is proper to the good to give courage and strength, consolations, tears, inspirations and quiet, easing, and putting away all obstacles, that one may go on in well doing.

The third: Of Spiritual Consolation. I call it consolation when some interior movement in the soul is caused, through which the soul comes to be inflamed with love of its Creator and Lord; and when it can in consequence love no created thing on the face of the earth in itself, but in the Creator of them all.

Likewise, when it sheds tears that move to love of its Lord, whether out of sorrow for one’s sins, or for the Passion of Christ our Lord, or because of other things directly connected with His service and praise.

Finally, I call consolation every increase of hope, faith and charity, and all interior joy which calls and attracts to heavenly things and to the salvation of one’s soul, quieting it and giving it peace in its Creator and Lord. 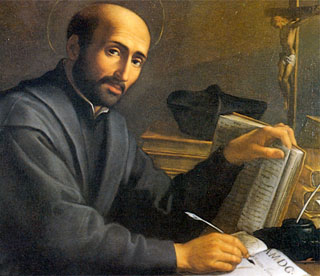 The fourth: Of Spiritual Desolation. I call desolation all the contrary of the third rule, such as darkness of soul, disturbance in it, movement to things low and earthly, the unquiet of different agitations and temptations, moving to want of confidence, without hope, without love, when one finds oneself all lazy, tepid, sad, and as if separated from his Creator and Lord. Because, as consolation is contrary to desolation, in the same way the thoughts which come from consolation are contrary to the thoughts which come from desolation.

The fifth: In time of desolation never to make a change; but to be firm and constant in the resolutions and determination in which one was the day preceding such desolation, or in the determination in which he was in the preceding consolation. Because, as in consolation it is rather the good spirit who guides and counsels us, so in desolation it is the bad, with whose counsels we cannot take a course to decide rightly.

The sixth: Although in desolation we ought not to change our first resolutions, it is very helpful intensely to change ourselves against the same desolation, as by insisting more on prayer, meditation, on much examination, and by giving ourselves more scope in some suitable way of doing penance.

The seventh: Let him who is in desolation consider how the Lord has left him in trial in his natural powers, in order to resist the different agitations and temptations of the enemy; since he can with the Divine help, which always remains to him, though he does not clearly perceive it: because the Lord has taken from him his great fervor, great love and intense grace, leaving him, however, grace enough for eternal salvation.

The eighth: Let him who is in desolation labor to be in patience, which is contrary to the vexations which come to him: and let him think that he will soon be consoled, employing against the desolation the devices, as is said in the sixth Rule.[38] 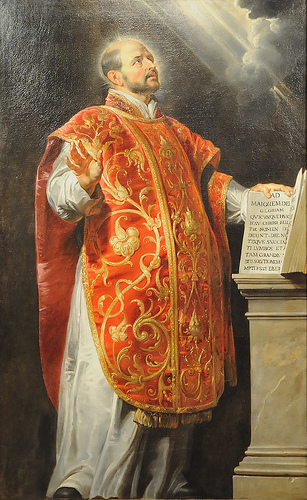 The ninth: There are three principal reasons why we find ourselves desolate.

The first is, because of our being tepid, lazy or negligent in our spiritual exercises; and so through our faults, spiritual consolation withdraws from us.

The second, to try us and see how much we are and how much we let ourselves out in His service and praise without such great pay of consolation and great graces.

The third, to give us true acquaintance and knowledge, that we may interiorly feel that it is not ours to get or keep great devotion, intense love, tears, or any other spiritual consolation, but that all is the gift and grace of God our Lord, and that we may not build a nest in a thing not ours, raising our intellect into some pride or vainglory, attributing to us devotion or the other things of the spiritual consolation.

The tenth: Let him who is in consolation think how he will be in the desolation which will come after, taking new strength for then.

The eleventh: Let him who is consoled see to humbling himself and lowering himself as much as he can, thinking how little he is able for in the time of desolation without such grace or consolation.

On the contrary, let him who is in desolation think that he can do much with the grace sufficient to resist all his enemies, taking strength in his Creator and Lord.

The twelfth: The enemy acts like a woman, in being weak against vigor and strong of will. Because, as it is the way of the woman when she is quarrelling with some man to lose heart, taking flight when the man shows her much courage: and on the contrary, if the man, losing heart, begins to fly, the wrath, revenge, and ferocity of the woman is very great, and so without bounds; in the same manner, it is the way of the enemy to weaken and lose heart, his temptations taking flight, when the person who is exercising himself in spiritual things opposes a bold front against the temptations of the enemy, doing diametrically the opposite. And on the contrary, if the person who is exercising himself commences to have fear and lose heart in suffering the temptations, there is no beast so wild on the face of the earth as the enemy of human nature in following out his damnable intention with so great malice.

The thirteenth: Likewise, he acts as a licentious lover in wanting to be secret and not revealed. For, as the licentious man who, 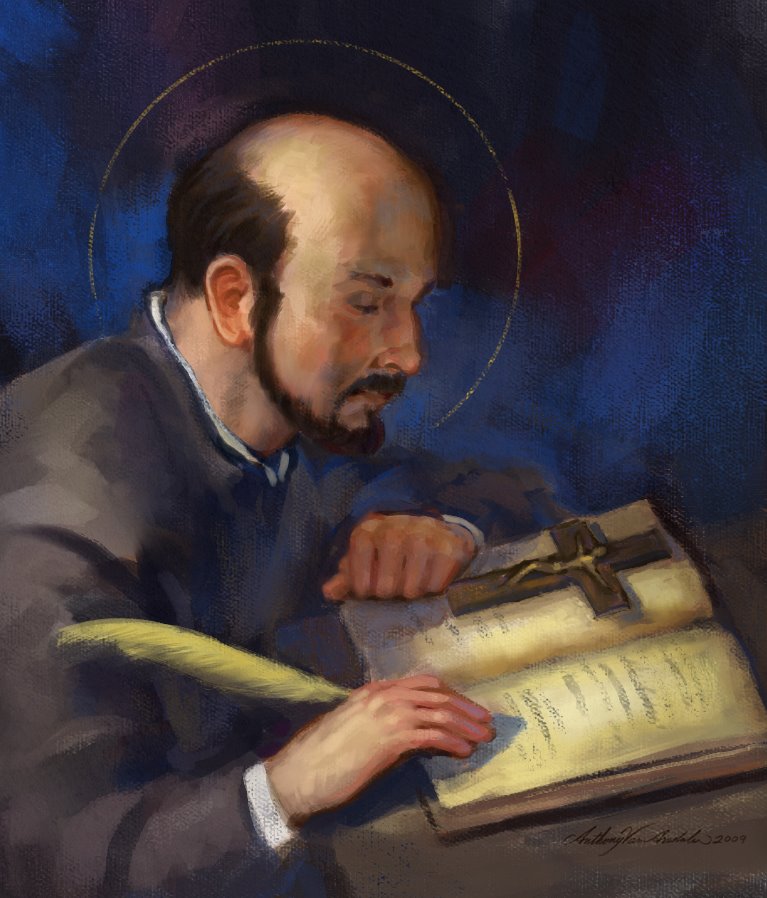 speaking for an evil purpose, solicits a daughter of a good father or a wife of a good husband, wants his words and persuasions to be secret, and the contrary displeases him much, when the daughter reveals to her father or the wife to her husband his licentious words and depraved intention, because he easily gathers that he will not be able to succeed with the undertaking begun: in the same way, when the enemy of human nature brings his wiles and persuasions to the just soul, he wants and desires that they be received and kept in secret; but when one reveals them to his good Confessor or to another spiritual person that knows his deceits and evil ends, it is very grievous to him, because he gathers, from his manifest deceits being discovered, that he will not be able to succeed with his wickedness begun.

The fourteenth: Likewise, he behaves as a chief bent on conquering and robbing what he desires: for, as a captain and chief of the army, pitching his camp, and looking at the forces or defences of a stronghold, attacks it on the weakest side, in like manner the enemy of human nature, roaming about, looks in turn at all our virtues, theological, cardinal and moral; and where he finds us weakest and most in need for our eternal salvation, there he attacks us and aims at taking us.