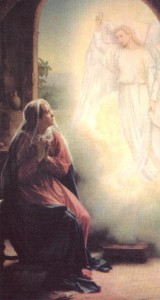 “As a sheaf of grain is tied together in the middle and spreads out at either end, so Mary’s life is bound together by her assent” – from the beginning of “The Handmaid of the Lord” by the great 20th century wife, mother, physician and mystic Adrienne von Spyer.  It has become my absolute favorite book on the Blessed Virgin Mary.  It has transformed my understanding and deepened my love and appreciation for Mary, the Mother of God…Our Blessed Mother.

Mary’s assent to the Lord binds the whole of her life such that “From this assent her life receives its meaning and form and unfolds toward past and future”.  This assent, the great “Yes” to the will of God is the moment.

“This single, all-encompassing act accompanies her at every moment of her existence, illuminates every turning point of her life, bestows upon every situation its own particular meaning and in all situations gives May herself the grace of renewed understanding.  Her assent gives full meaning to every breath, every movement, every prayer of the Mother of God”

Everything that we understand Mary to be, do, and say finds her assent at its source.  But, the assent must be understood as 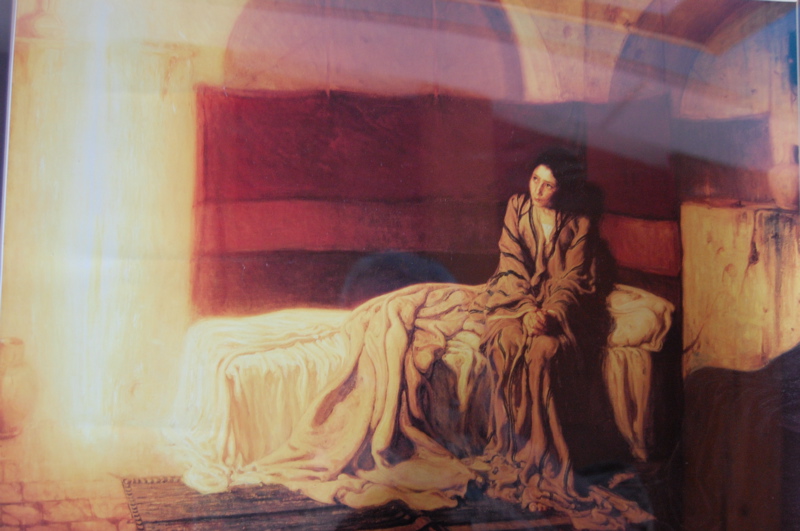 one of freedom, “This is the nature of an assent: it binds the one who gives it, yet it allows him complete freedom in shaping its expression”.  Her assent binds her to the Lord, yet it frees her to express herself dramatically much like the sheaf is bound by the cord around its middle but the sheaf bursts freely outward from the binding cord.

“Mary’s meeting with the angel is like the summation of her entire preceding life of contemplation. It is the first thing we learn about her.  We do not know who she is, we do not know her past.  But when we learn that she saw the angel, the whole composition of her soul becomes visible.  The angel which appears is the fulfillment of her prayer – not in the sense that she had prayed for the appearance or prepared herself for it, but rather in the sense that she has held herself in readiness for a mission still unknown to her.  She has lived in an attitude of prayer, and in virtue of this life she is capable in the crucial moment of seeing and obeying the angel who comes to her.  Both vision and obedience flow from the same source in her; from the openness toward the mission which God may give her, when and in whatever way he likes.  Her obedience is the prototype of every future instance of Christian obedience, which draws its whole meaning from the life of prayer and the perception of God’s will.” [Adrienne von Speyr: Handmaid of the Lord. From the Chapter, “Mary and the Angel“, pg. 27] 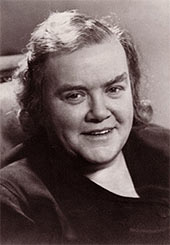 Take a look at an excerpt from “Handmaid of the Lord”  you can purchase it from Ignatius Press as a book or you may like to download the mp3 reading.  Check it out….