“Dispose the day…”  OK, I really didn’t understand the significance of St. Crispin and St. Crispinian except for their presence in the robust guy “band of brothers” speech from Shakespeare’s Henry V…very macho “rouse the troops” moment in the play… I just figured they were warriors too…(besides I’m more of a  “Midsummer Night’s Dream” kind of Shakespeare girl anyway…)

That is until I read Omar F. A. Gutierrez’s fantastic blog post bringing it all together!  Treat your brain and heart by visiting his blog  Regnum Novum

Here, once again, is Omar Guiterrez breaking open for Discerning Hearts the beauty of Catholic Social Doctrine….
(it’s amazing where you can find it if you have eyes to see and ears to hear)

Today marks the feast of Saints Crispin and Crispian, brothers who were martyred by beheading in Rome sometime during the reign of the Emperor Diocletian (emperor from 284-305 AD).

That the saints lived is certainly true. The story of these brothers, however, comes to us from a late account that has little to suggest it’s authenticity. Generally, though, we know them to be from Rome, to have worked in Soissons, Gaul (now France), and to have been shoemakers thus earning them the title of patrons for shoemakers, cobblers, and those who work with leather.

The tale is that these two brothers, perhaps twins of noble blood, caught up in the zealous care for their faith and in love for Christ, left Rome in the 3rd century in order to spread the Gospel in Gaul. They took up the trade of the shoemaker and would not charge the poor who requested their services. By their example, and not, it seems,by any grand preaching, these two were good witnesses to the faith and converted many. When Maximian was appointed co-emperor in 285 and came to Gaul, the brothers were accused and brought before a character named Rictiovarus, whom we don’t exactly know existed but whose seathing hatred for Christians is legendary. At any rate, they were tortured mercilessly, but when the attempt to kill the saintly brothers through drowning and burning  failed,  Rictiovarus was driven into such a desperate fury that he threw himself into the fire prepared for the brothers thus killing himself. Eventually, Crispin and Crispian were beheaded which is a very effective way of killing someone…unless you’re St. Winifred, in which case that might not always work.  There are several things I’d like to draw out about these saints.

The first is that it was on this day 595 years ago (1415) that King Henry V led his horribly outnumbered English army into battle against the French at Agincourt, the battle so wonderfully remember today for the speech written by Shakespeare in Henry V,( a version of which can be seen above with Kenneth Branagh.)

The second thing is this, brought out in an edition of Butler’s Lives of the Saints, namely that Sts. Crispin and Crispian are a wonderful reminder that sanctity is not only for the cloistered hermit who has removed himself from society. These two never embarked on some large speaking tour throughout Gaul. They did not write any large tomes explicating the faith for the masses. They are not known for levitating or bilocation or magically producing shoes no one today can replicate with all our modern technology. No, they were simply saintly shoemakers. They were holy artisans is all, and this is a good thing. In this way they are almost the perfect patron saints for laborers, heroes of the Social Doctrine of the Church.

I’m reminded of a line from the Part I Chapter 3 of St. Francis de Sales’ classic Introduction to the Devout Life where he says:

It is an error, nay more, a very heresy, to seek to banish the devout life from the soldier’s guardroom, the mechanic’s workshop, the prince’s court, or the domestic hearth. Of course a purely contemplative devotion, such as is specially proper to the religious and monastic life, cannot be practised in these outer vocations, but there are various other kinds of devotion well-suited to lead those whose calling is secular, along the paths of perfection. The Old Testament furnishes us examples in Abraham, Isaac and Jacob, David, Job, Tobias, Sarah, Rebecca and Judith; and in the New Testament we read of St. Joseph, Lydia and Crispus, who led a perfectly devout life in their trades:–we have S. Anne, Martha, S. Monica, Aquila and Priscilla, as examples of household devotion, Cornelius, S. Sebastian, and S. Maurice among soldiers;–Constantine, S. Helena, S. Louis, the Blessed Amadaeus, 2 and S. Edward on the throne. And we even find instances of some who fell away in solitude,– usually so helpful to perfection,–some who had led a higher life in the world, which seems so antagonistic to it. S. Gregory dwells on how Lot, who had kept himself pure in the city, fell in his mountain solitude. Be sure that wheresoever our lot is cast we may and must aim at the perfect life.

Sanctity can be found through the work which God has given us no matter what that might be. Indeed it is to be found in the guardroom, in the shop, in the court, in the home. This is the message of the Social Teaching of the Catholic Church. Sanctity and evangelization can be found through the labor of everyday life. It is less what you do than the way you do it, and the way to do anything is with the love of Christ. 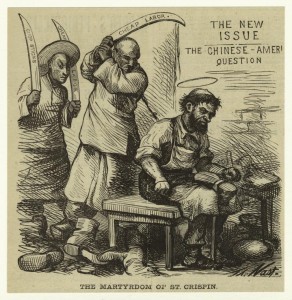 Third, I want to point out that with saints whose stories are in doubt it can be tempting  to write them off as the incipient pap of bygone days. There are some who actually claim that the Church has managed its control over the laity throughout the centuries by inventing such stories. I’m not making that claim, but many are tempted to think that there never was such a saint, or that we cannot glean any lesson from them, or that, poor bumpkins that they were, those ignoramuses of the early years of the Church meant well if they weren’t always truthful. This sort of temptation is what Chesterton called “chronological snobbery.” Somehow we image that in our Enlightened age we appreciate truth much more than the people of the early centuries. This would be a terrible mistake.

Stories do evolve over time, and tales can be embellished but we should never forget three things: first, that the stories were told because of some real event or real person, even if we don’t remember their name and even if our collective memories have gotten the details wrong. Second, the miraculous is not impossible. We believe in things seen and unseen, so why presume the fantastical must be unreal? Third, someone in heaven answers to the name of these saints in question. That’s what matters.  – Regnum Novum

Thanks Omar!  My visits to DSW will never be the same again.