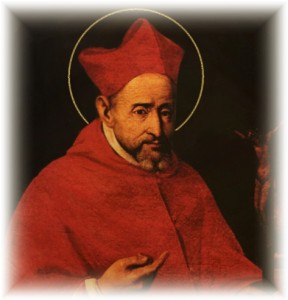 VATICAN CITY, 23 FEB 2011 (VIS) – Benedict XVI dedicated his catechesis during this morning’s general audience, held in the Paul VI Hall in the presence of 7,500 people, to St. Robert Bellarmine (1542-1621), an outstanding figure of a troubled age in which “a serious political and religious crisis provoked a split between
entire nations and the Holy See”.
St. Robert Bellarmine, following an excellent cultural and humanistic education, entered the Society of Jesus in 1560. He studied in Rome, Padua and Leuven and was later made cardinal and archbishop of Capua, Italy. He held high office in the service of the Pope as a member of several congregations and head of Holy See diplomatic missions to Venice and England. During his final years he wrote a number of books on spirituality in which he condensed the fruits of his annual spiritual exercises. He was beatified and canonised by Pope Pius XI, who also declared him a Doctor of the Church.

“His ‘Controversial Works’ or ‘Disputationes’ are still a valid point of reference for Catholic ecclesiology”, said the Holy Father. “They emphasise the institutional aspect of the Church, in response to the errors then circulating on that topic. Yet Bellarmine also threw light on invisible aspects of the Church as Mystical Body, which he explained using the analogy of the body and soul, in order to describe the relationship between the interior richness of the Church and her visible exterior features.

“In this monumental work, which seeks to categorise the various theological controversies of the age, he avoids polemical and aggressive tones towards the ideas of the Reformation but, using the arguments of reason and of Church Tradition, clearly and effectively illustrates Catholic doctrine.

“Nonetheless”, the Pope added, “his true heritage lies in the way in which he conceived his work. His burden of office 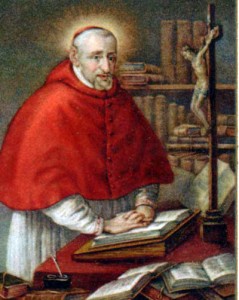 did not, in fact, prevent him from striving daily after sanctity through faithfulness to the requirements of his condition as religious, priest and bishop. … His preaching and catechesis reveal that same stamp of essentiality which he learned from his Jesuit education, being entirely focused on concentrating the power of the soul on the Lord Jesus, intensely known, loved and imitated”.

In another of his books, “De gemitu columbae” in which the Church is represented as a dove, Robert Bellarmine “forcefully calls clergy and faithful to a personal and concrete reform of their lives, in accordance with the teachings of Scripture and the saints. … With great clarity and the example of his own life, he clearly teaches that there can be no true reform of the Church unless this is first preceded by personal reform and conversion of heart on our part”.

“If you are wise, then understand that you were created for the glory of God and for your eternal salvation”, said the Pope quoting from one of the saint’s works. “Favourable or adverse circumstances, wealth and poverty, health and sickness, honour and offence, life and death, the wise must neither seek these things, nor seek to avoid them per se. They are good and desirable only if they contribute to the glory of God and to your eternal happiness, they are bad and to be avoided if they hinder this”.

The Pope concluded: “These words have not gone out of fashion, but should be meditated upon at length in order to guide our journey on this earth. They remind us that the goal of our life is the Lord. … They remind us of the importance of trusting in God, of living a life faithful to the Gospel, and of accepting all the circumstances and all actions of our lives, illuminating them with faith and prayer”.

0 thoughts on “St. Robert Bellarmine, doctor of the Church…”an outstanding figure of a troubled age””