St. Peter Claver  was a Jesuit who due to his life and work became the patron saint of slaves, of Colombia, and of African Americans.

Claver arrived in Cartagena in 1610. By this time the slave trade had been established in the Americas for about 100 years and Cartagena was a chief center for it. Ten thousand slaves poured into the port yearly; crossing the Atlantic from West Africa under conditions so foul and inhuman that an estimated one-third of them died in transit. Although slave-trading was condemned by Pope Paul III and later labeled “supreme villainy” by Pius IX, there were fortunes to be made and it continued to flourish.

As soon as a slave ship entered the port, Claver headed for the wharf and moved into its filthy and diseased hold to doctor and minister to the ill-treated and miserable human cargo. After the slaves were herded from the ship and penned in nearby yards to be 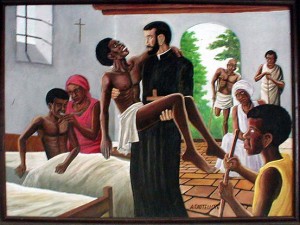 studied by crowds and buyers, Claver plunged in among them with medicines, food, bread, brandy, lemons and tobacco. With the help of interpreters and pictures which he carried with him, he gave basic instruction and assured the slaves of their human dignity and God’s saving love. During the 40 years of his ministry, Claver single-handedly catechized and baptized an estimated 300,000 of these slaves. Furthermore, Claver followed up to see that as Christians they were accorded their legal rights.

His apostolate extended beyond his care for slaves. He preached in the city square, gave missions to sailors and traders as well as country missions – returning every spring to visit those he had baptized and to follow up that they were being treated humanely. During these missions he avoided, whenever possible, the hospitality of the planters and overseers, and would lodge instead in the slave quarters.

His work on behalf of the slaves did not prevent him from caring also for the souls of the more well-to-do members of society and for the traders and visitors (including Muslims and English Protestants) to Cartagena, or for condemned criminals, many of whom he prepared for death. He was also a frequent visitor to the city’s hospitals.

Illness finally forced the saint into his room, where he lingered another four years, largely forgotten and neglected. He died on 8 September 1654. The city magistrates ordered a public funeral, at public expense, and he was buried with great pomp and ceremony.

He was canonized in 1888, and Pope Leo XIII declared him the worldwide patron of missionary work among black slaves. – Wikipedia

Dear Saint Peter Claver, you were permeated with compassion for the oppressed, for human beings sold as slaves and treated as expendable beasts. While alleviating their natural ills, you also took away their spiritual ills, and taught them the surpassing knowledge of Christ. Inspire many of our contemporaries to become self-sacrificing missionaries like you. Amen.