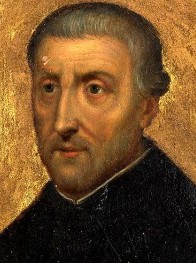 VATICAN CITY, 9 FEB 2011 (VIS) – Benedict XVI dedicated his catechesis during this morning’s general audience to St. Peter Canisius, whom Leo XIII proclaimed as “the second apostle of Germany”, and who was subsequently canonised and proclaimed as a Doctor of the Church by Pius XI in 1925.

Born at Nijmegen in the Netherlands in 1521, Peter Canisius entered the Society of Jesus in 1543 and was ordained a priest in 1546. In 1548, St. Ignatius of Loyola sent him to complete his spiritual formation in Rome. A year later he moved to the Duchy of Bavaria where he became dean and rector of the University of Ingolstadt. Later he was administrator of the diocese of Vienna, Austria, where he practiced his pastoral ministry in hospitals and prisons. In the year 1566 he founded the College of Prague and, until 1569, was the first superior of the Jesuit province of upper Germany.

In this role he created a network of Jesuit communities in Germanic countries, especially schools, which became starting points for the Catholic Reformation. He participated in religious discussions with Protestant leaders, including Melanchthon, held in the city of Worms, acted as pontifical nuncio to Poland, participated in the two Diets of Augsburg in 1559 and in 1565, and attended the closing session of the Council of Trent. In 1580 he retired to Fribourg in Switzerland where he dedicated himself to writing and where he died in 1597. Peter Canisius also edited the complete works of Cyril of Alexandria and of St. Leo the Great, and the Letters of St. Jerome.

Among his most famous works were his three “Catechises”, written between 1555 and 1558. The first was aimed at students capable of understanding the basic notions of theology; the second at ordinary young people for their primary religious education; and the third at children with a medium- or secondary-school education.

“One characteristic of St. Peter Canisius”, said the Holy Father, was “that he was able to harmonise fidelity to dogmatic principles with the respect due to each individual. … In a historical period of deep confessional contrasts, he avoided severity and the rhetoric of anger, something fairly rare in discussions among Christians at that time, … and sought only to explain our spiritual roots and to revitalise faith in the Church”.

“In the works destined for the spiritual education of the masses, our saint insists on the importance of the liturgy, … the rites of Mass and the other Sacraments. However, at the same time, he is careful to show the faithful the importance and beauty of individual daily prayer to accompany and permeate participation in the Church’s public worship”, said Benedict XVI, pointing our that “this exhortation and this methodology maintain all their value, especially after being authoritatively re-presented by Vatican Council II”.

Peter Canisius “clearly teaches that apostolic ministry is incisive and produces fruits of salvation in people’s hearts only if the preacher is a personal witness of Jesus and knows how to become His instrument, closely bound to Him through faith in His Gospel and in His Church, through a morally coherent life and incessant prayer”. AG/VIS 20110209 (530)