In this episode, Fr. Gallagher  discusses “eucatastrophe.”  J. R. R. Tolkien  defined  this term in his lecture “On Fairy-Stories,” as  a “good catastrophe, the sudden joyous ‘turn’…it is a sudden and miraculous grace…a fleeting glimpse of Joy” (On Fairy-Stories 153) Going further, it is a moment experienced in the Gospel, referencing the greatest moment of eucatastrophe in human history: the life, death, and resurrection of Jesus Christ (On Fairy-Stories 156). When understood through the mechanism of eucatastrophe “The Lord of the Rings” becomes a “fundamentally religious and Catholic work” (Letter 142).

Full memory flooded back, and Sam cried aloud: ‘It wasn’t a dream! Then where are we?’ And a voice spoke softly behind him: ‘In the land of Ithilien, and in the keeping of the King; and he awaits you.’ With that Gandalf stood before him, robed in white, his beard now gleaming like pure snow in the twinkling of the leafy sunlight. ‘Well, Master Samwise, how do you feel?’ he said. But Sam lay back, and stared with open mouth, and for a moment, between bewilderment and great joy, he could not answer. At last he gasped:

‘Gandalf! I thought you were dead! But then I thought I was dead myself. Is everything sad going to come untrue? What’s happened to the world?’ ‘

A great Shadow has departed,’ said Gandalf, and then he laughed, and the sound was like music, or like water in a parched land; and as he listened the thought came to Sam that he had not heard laughter, the pure sound of merriment, for days upon days without count. It fell upon his ears like the echo of all the joys he had ever known. But he himself burst into tears. Then, as a sweet rain will pass down a wind of spring and the sun will shine out the clearer, his tears ceased, and his laughter welled up, and laughing he sprang from his bed. ‘How do I feel?’ he cried. ‘Well, I don’t know how to say it. I feel, I feel’ – he waved his arms in the air – ‘I feel like spring after winter, and sun on the leaves; and like trumpets and harps and all the songs I have ever heard!’

Tolkien, J.R.R.. The Return of the King: Being the Third Part of the Lord of the Rings (Kindle Locations 4133-4140). Houghton Mifflin Harcourt. Kindle Edition.

Frodo ran to meet him, and Sam followed close behind. ‘Well, if this isn’t the crown of all!’ he said. ‘Strider, or I’m still asleep!’

‘Yes, Sam, Strider,’ said Aragorn. ‘It is a long way, is it not, from Bree, where you did not like the look of me? A long way for us all, but yours has been the darkest road.’

And then to Sam’s surprise and utter confusion he bowed his knee before them; and taking them by the hand, Frodo upon his right and Sam upon his left, he led them to the throne, and setting them upon it, he turned to the men and captains who stood by and spoke, so that his voice rang over all the host, crying:

‘Praise them with great praise!’

And when the glad shout had swelled up and died away again, to Sam’s final and complete satisfaction and pure joy, a minstrel of Gondor stood forth, and knelt, and begged leave to sing. And behold! he said:

‘Lo! lords and knights and men of valour unashamed, kings and princes, and fair people of Gondor, and Riders of Rohan, and ye sons of Elrond, and Dúnedain of the North, and Elf and Dwarf, and greathearts of the Shire, and all free folk of the West, now listen to my lay. For I will sing to you of Frodo of the Nine Fingers and the Ring of Doom.’ And when Sam heard that he laughed aloud for sheer delight, and he wept.

And all the host laughed and wept, and in the midst of their merriment and tears the clear voice of the minstrel rose like silver and gold, and all men were hushed. And he sang to them, now in the elven-tongue, now in the speech of the West, until their hearts, wounded with sweet words, overflowed, and their joy was like swords, and they passed in thought out to regions where pain and delight flow together and tears are the very wine of blessedness.

Tolkien, J.R.R.. The Return of the King: Being the Third Part of the Lord of the Rings (Kindle Locations 4178-4193). Houghton Mifflin Harcourt. Kindle Edition. 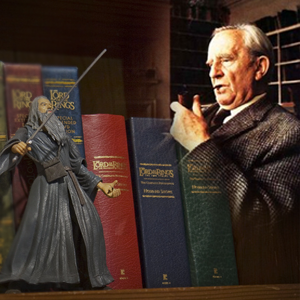 For more episodes in this series:  A “Lord of the Rings” Spiritual Retreat with Fr. Timothy Gallagher

Father Timothy M. Gallagher, O.M.V., was ordained in 1979 as a member of the Oblates of the Virgin Mary, a religious community dedicated to retreats and spiritual formation according to the Spiritual Exercises of St. Ignatius. Fr. Gallagher is featured on the EWTN series “Living the Discerning Life: The Spiritual Teachings of St. Ignatius of Loyola”.

For more information on how to obtain copies of Fr. Gallaghers’s various books and audio which are available for purchase, please visit his website: frtimothygallagher.org

For the other episodes in this series check out Fr. Timothy Gallagher’s “Discerning Hearts” page